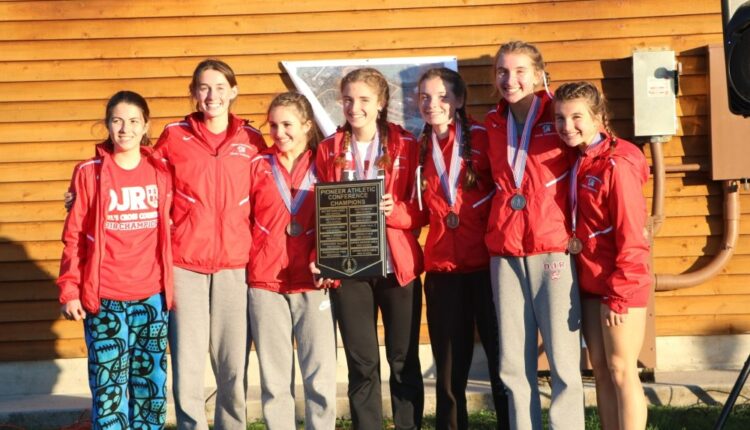 WORCESTER >> There were certainly no surprises concerning the winners of the Pioneer Athletic Conference boys and girls cross country individual championships on Thursday afternoon. Owen J. Roberts seniors Andrew McGonigle and Claire Zubey both led pretty much from start to finish and won by comfortable margins at Heebner Park to claim repeat titles.

McGonigle ran a time of 16:22, 11 seconds slower than his winning PAC time last year, but 34 seconds ahead of Johnson.
“I wanted to go for the course record,” McGonigle said. “We had a little group, but I made a surge going into the mile and another surge and I had a pretty big gap. But once I got into the second mile, I went up a hill and it was windy and I was pretty much by myself. I didn’t want to kill myself.”

Last year, McGonigle finished sixth in District 1 and then had a disappointing finish in the PIAA Championships when he came down with a case of strep throat.

“It was a rough day for me,” McGonigle said concerning the state race. “I hope to bounce back this year and be in the top 10.”

And all of his preparation is focused toward that goal, including just being concerned about who he beats and not worrying about his times.

“I’ve been really wanting to throw times out the window,” McGonigle said. “Top 10 in states has been a really big goal. I feel like the races I can take easy, I take easy. It’s big for me not using my best possible time, make sure I’m not exerting myself to be ready for the postseason.”

Johnson is running cross country for the first time this season.

“I’m pretty happy with that,” Johnson said concerning his time of 16:56 and second-place finish. “I don’t know if the Perkiomen Valley team is going to make it to states. Hopefully I can qualify individually. That’s my goal.”

Zubey finished in 18:41, which was 19 seconds better than her winning time last year and good enough to win by 34 seconds.
“I felt good. I went out nice and controlled,” Zubey said. “But I looked back – which was a mistake – and saw my teammate Jane Kratz and thought, ‘I’ve gotta go.’ That wasn’t really my plan. I wanted to take the first mile a little slower. But I got excited. I’m really working on getting the second half faster. I closed well.

“That back stretch was really brutal because of the cold and the wind. But I kept pushing through. I’m really happy with how I ran. I’m feeling great. I’m feeling confident. I’m ready to go for districts and do my best, have a great end to my senior year.”

Kratz was also happy with the way she ran and with her time of 19:15. Last year, she finished 16th.

“Definitely a really good race,” Kratz said. “One of my best races this season. I was pleasantly surprised that I was second. The next couple of weeks will be really exciting. I’m hoping to get to states and see what happens.”

Also helping the Owen J. Roberts girls to the team title were Ava Taylor in eighth place, Grace Fennell in ninth and Khya Dangelo in 11th. That gave the Wildcats 31 points. Phoenixville, led by Anna Carruthers in third and Kenzie Padilla in fourth, finished second with 44.

“I knew I wanted to do better than last year, but more importantly, I was really happy that my team was able to run great,” Zubey said. “I feel our team is a close-knit group and works really well together.”

The next step for the PAC runners will be the District 1 meet at Lehigh University on Oct. 28