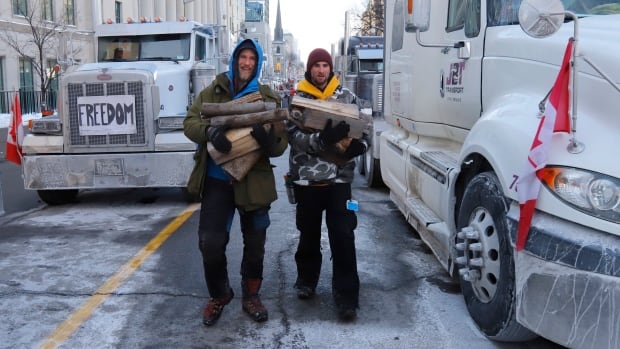 Ottawa protest inspires talk of copycat convoys in US and beyond

A heated exchange unfolded in Washington a few days ago over a phenomenon not typically known for eliciting passions there.

The topic was a culture-war battle. In Canada.

In the US Congress, members laced into each other in a debate about the protest in Ottawa and the broader question of vaccine mandates.

“I’m perfectly happy to slap around the Canadian prime minister for his absolute, abject failure and to side with Canadian truckers,” lawmaker Chip Roy said.

This was after a Democrat scolded Roy for propagating the absurd lie that Trudeau had escaped to the US and was hiding there.

“This is disinformation. Your disinformation,” said Rep. Mark Takano of California, chiding the Republican for a falsehood-spreading tweet about the Canadian leader.

That exchange last week underscored the extent to which the truck blockade in Ottawa has gone international, inspiring talk of copycat events in the US and beyond.

Ottawa protests front and center in US culture wars

Anti-COVID-19 restriction protests in Ottawa are front and center of the US culture wars, with right-wing media and politicians voicing their support. The response has helped a new online fundraiser raise millions of dollars in a few days.

An initial sign of the cross-border spillover came Monday night as trucks were blocked on both sides of the Windsor-Detroit Ambassador Bridge, the most important Canada-US trade link.

There are now pandemic-related truck convoys planned in all 27 European capitals, New Zealand and elsewhere in the US, as right-wing American social media channels buzz with chatter of convoys to Washington.

One Fox News prime-time host after another has devoted segments to trashing Canada’s prime minister and toasting the convoy as a cause célèbre.

Consider this the globalization of right-wing protest. And in this particular trade, Canada now finds itself in the import-export business.

We’ve imported language and money for the event from Americans.

Much of the protest lingo in Ottawa appears copied and pasted from the US political vocabulary, with participants referring to themselves as “patriots” and “We the People” who “hold the line” — and international donations have flowed in. 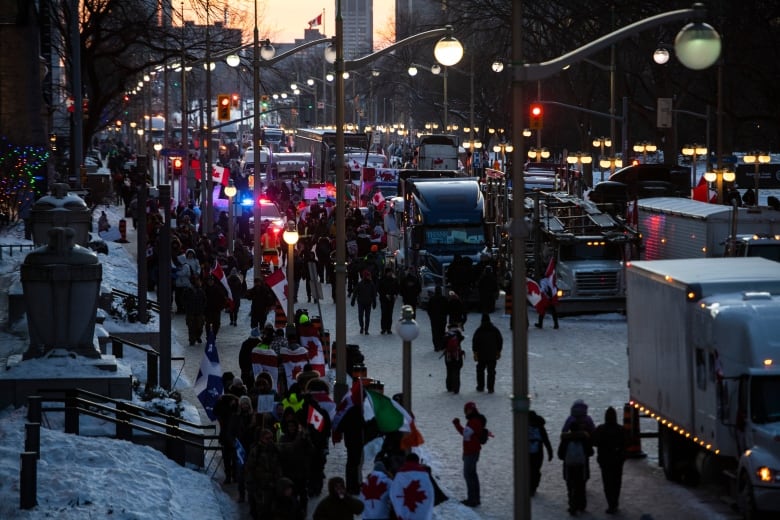 The Ottawa protest has gained the notice of many right-wing figures in the US, from ex-president Donald Trump to Fox News host Tucker Carlson. (Justin Tang/The Canadian Press)

Now, Canada is exporting its product back to the world. Some people who monitor right-wing online chatter say similar events in the US are inevitable.

The copycat idea is being promoted by activists and commentators not just on the far right but by big voices, including the biggest one at Fox News.

Tucker Carlson told his prime-time audience this week that trends usually start in the US and move north to Canada: “But this time, the opposite could happen.”

One former Trump administration official has been active on both sides of the border during the pandemic. Paul Alexander, a Canadian with a brief but controversial stint as a COVID-19 adviser to the ex-president, has been involved in the Ottawa protest.

There’s still no date or defined plan beyond vague talk of a convoy from California to Washington, DC But a researcher at the Atlantic Council think-tank in Washington predicted these protests will spread.

A researcher of far-right social media agrees the US should brace for these events.

“I think it’s a ‘when’ and not an ‘if,'” said Sara Aniano, a grad student who researches at Monmouth University in New Jersey. “I would be shocked if they didn’t at least try [in the U.S.].”

Every year, the Super Bowl inspires some collage of conspiracy theories on the far-right, often rooted in paranoia about the halftime show being Satanic. But this year has the added layer of anti-mandate truckers, who some are hoping will “shut down” the Super Bowl altogether. pic.twitter.com/iiFaMUD4F0

What’s already clear is that this phenomenon has generated something cherished in America’s political industry: funding. It’s a money-making machine.

The Christian crowdfunding site GiveSendGo said Canada’s convoy instantly smashed its record for most donations ever, garnering more than $7 million since the weekend after an even larger funding effort on GoFundMe was shut down.

GiveSendGo said the money is streaming into Canada from everywhere: “An overwhelming outpouring of support from across the globe,” is how the company described it.

Indeed, some of the biggest donations listed on the site include thousands attributed to American names and businesses.

The enthusiasm for the phenomenon was evident at a Donald Trump rally in Texas last month, where the ex-president’s most ardent supporters gushed support. 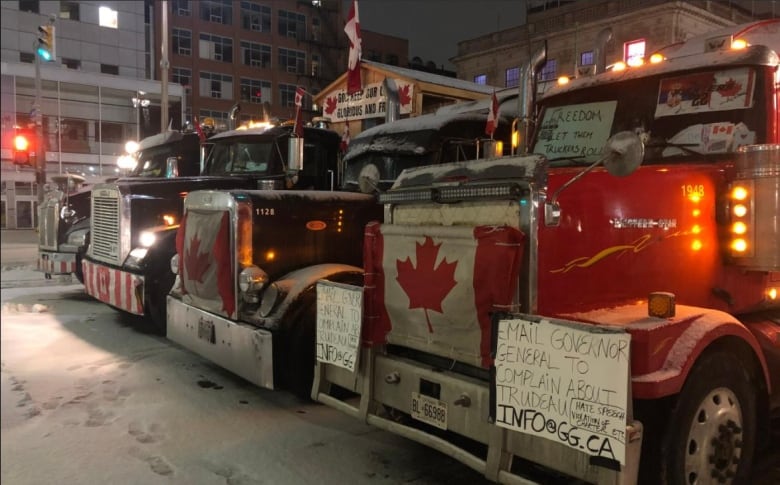 This included one man selling flags at the rally, who was himself draped in several flags, including the Confederate battle flag.

“Go truckers, go Canadians,” said Jeff Brown of Portland, Ore., a Trump supporter who sells the flags at rallies. “Stand up! We’ll come across the border and try to bitch-slap anybody that tries to hurt you guys. We’ve had enough.”

In an interview, another woman shared her potpourri of conspiracy theories, with a strong scent of QAnon and infused with bits of Canadiana.

In the worldview of Becky Barnes from Dallas, Donald Trump is still president (he isn’t — he lost by seven million votes and came up short in a half-dozen swing states); John F. Kennedy Jr. is secretly vice-president (he died in 1999); and Canada’s true head of state lives in Victoria, BC (the person in question is a QAnon-peddling imposter who spouts violent rhetoric).

Barnes said the world is praying for revolts like the one in Canada. 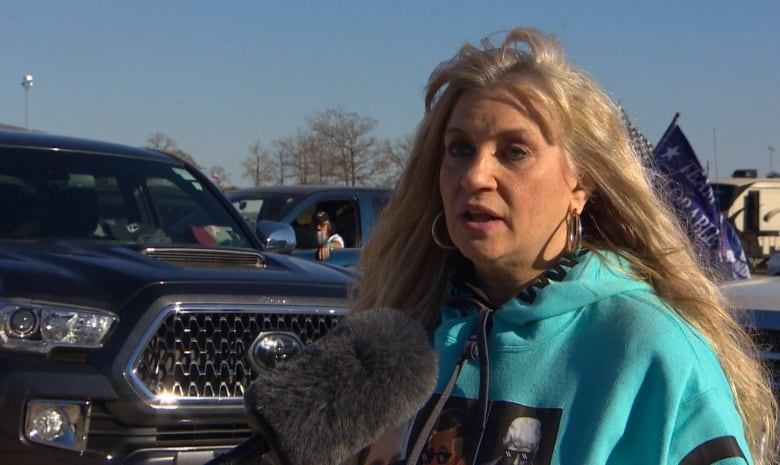 Becky Barnes, who was interviewed at a Trump rally in Texas in late January, insists Trump is still president and fully supports the vaccine mandate protesters in Ottawa. (CBC)

Christine Babbino of Bethlehem, Penn., who was also at the Trump event, offered a more practical rationale for supporting the Canadian protests.

Babbino, who works in logistics, said the cost of transporting goods is going up, and she blames pandemic rules for contributing to it.

Regina Bateson has a unique perspective on the cross-border politics at play. She’s from the US, ran for Congress as a Democrat and now lives in Ottawa.

She’s also an academic who researches political violence and says the standoff will end in one of three ways: a negotiated settlement, which she said appears increasingly unlikely; a violent incident that provokes a police crackdown; or a clash with local residents.

But she made a longer-term prediction: That the group in Ottawa will remain a presence in Canadian political life, as its members spend weeks together, establishing new connections and developing their network of like-minded people.

“I think they’re emboldened, empowered,” said Bateson, a professor at the University of Ottawa.

“They’re moving faster than institutions and political leaders can keep up with. And they’re here to stay.”

Why Ottawa protesters seem to be a step ahead of police

Experts say the presence of former police officers within the ranks of the Ottawa protesters is giving them a tactical edge over local law enforcement.

Another surprise phenomenon, she said, is the tsunami of cash flooding into a Canadian political cause.

She said big-money politics is a fact of life in the US, with a vast ecosystem of groups on the left and right that thrive on polarizing debates that get people clicking and donating cash.

Bateson related her surprise after moving to Canada and seeing how few political ads there were during the last federal election.

Meanwhile, she said this protest has generated as much money in just a few days as a major Canadian political party receives in donations over several months.

American awareness of the event was building in January and it surged, she said, after Trump got involved with a speech and then a statement where the defeated president supported the convoy and referred to Trudeau as “a far-left lunatic.”

“[When that happened] I thought, oh boy, here we go. I knew that was going to set in motion a series of events, perhaps unlike Canada has ever seen,” Bateson said. “Now it’s on Fox News, Breitbart. It’s a top story on most of these [U.S.] platforms by this point.”

It’s become a top-of-mind cause for ambitious Republican politicians, a prime issue for candidates in Republican primaries in this year’s midterm elections and future and past presidential aspirants are talking about it.

Attorneys-general in several states are promising investigations into GoFundMe, the crowdsourcing site that shut down an earlier convoy fundraising campaign.

Conservatives in the US, including right-wing media and high-profile Republicans, are vocalizing their support for the Canadian convoy and donating money. They’re not pleased that GoFundMe has cut off the convoy’s fundraising efforts.

So what does Canadian law say about foreign donations to a political cause that police accuse of unlawful behavior? Not much, it appears.

Leah West, a national security lawyer and Carleton University professor, described in a Twitter thread her view of the limitations to using the Criminal Code for financial transactions in this case.

It’s hard to know where the money even comes from.

Members of Parliament intend to have the original crowdfunding company, GoFundMe, testify before the Commons Standing Committee on Public Safety and National Security.

But Jessica Davis, a former federal official in financial intelligence, said there are no rules requiring foreign donors to a crowdfunding site to list their real names on the site.

“We have no ideas [who they are],” she said. “There’s literally no identity verification.”