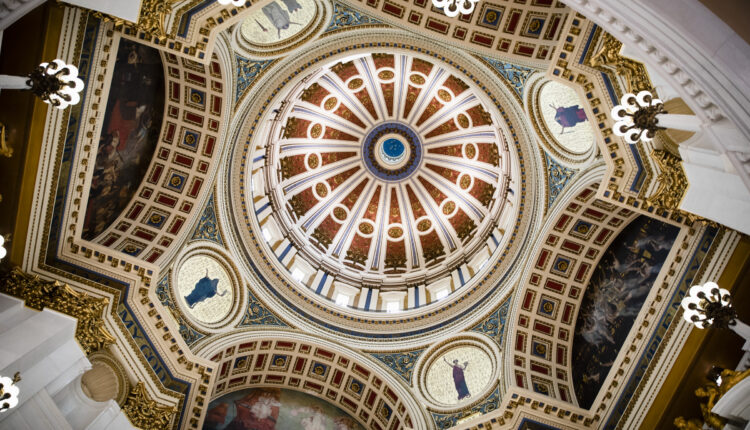 Because we get so much of our news online, many Pennsylvanians did not see the advertisement of five proposed amendments to the Pennsylvania Constitution that were published in Pennsylvania newspapers on Thursday, Sept. 1 — three months before the next general election as prescribed by the state constitution.

If approved in the next legislative session, these amendments will be advertised once more and then will go on the ballot of an election chosen by the General Assembly.

The reason that as many as five proposed amendments could appear at one time is that the Pennsylvania Constitution is relatively easy to amend. Unlike the federal constitution, there is no super-majority requirement. If a simple majority of legislators approve an amendment in two successive sessions, the amendment goes to the voters for an up-or-down vote.

Amendments even lacking popular majority support can be approved, because the General Assembly can schedule a vote on an amendment for a primary election, one with traditionally light turnout and about which independent voters often are unaware.

The advantage of this ease of amendment is that Pennsylvania’s Constitution tends to closely follow majority sentiment. Over the years, voters have reversed unpopular judicial decisions and have altered the structure of government to meet current needs.

And because there still must be majority support for any amendment in the General Assembly, Pennsylvania has been able to do this without the costly fights over unrealistic proposals that have afflicted states with public initiative options, like California.

Unfortunately, this healthy amendment system is now threatened by the hyper-partisanship that is weakening American public life in many ways. Unlike past instances of mixed government, compromise between Democratic Gov. Tom Wolf and the Republican majority in the General Assembly has often proved elusive, leading to gubernatorial vetoes and veto threats, stymying legislative action.

Will the Pa. House vote on election reform this fall? Don’t count on it, top Republican says

Rather than live with this stalemate, or use it to political advantage in the next election, Republican leaders have turned to the amendment process to put what are essentially statutes into the Constitution.

This abuse of the amendment process threatens to handcuff Pennsylvania government in years to come.

This is not the first time Pennsylvania has legislated through constitutional amendment. Two articles in the Constitution of 1874 created detailed regulation of corporations in general and railroads in particular because the delegates to the convention that drafted the Constitution did not trust the legislature to regulate powerful economic interests. But because conditions change, that constitutional language was eventually eliminated.

The current trend of statutes as amendments first appeared at the primary election of 2021. One amendment on the ballot changed the structure of government by eliminating the power of the Governor to veto legislative abrogation of emergency declarations. Whatever one thinks of the merits of this change, it was a proper subject of constitutional amendment.

But at the same time, the voters approved what amounted to a new emergency statute, providing that emergency declarations should last for no more than 21 days without legislative approval.

Obviously, this is a ridiculous matter to put into a constitution. There is nothing magical about 21 days. The short period reflected temporary legislative vexation over COVID restrictions and is very likely to prove unwieldy in the future. But now, any change will require a new amendment.

Of the five proposed amendments that were advertised on Sept. 1, three are the proper subject of amendment. These amendments extend the time limit for victims of childhood sexual abuse to file suit; prevents the Pennsylvania courts from finding either a constitutional right to abortion or, apparently, a right to life in the unborn; and give candidates for governor the power to choose their running mates for lieutenant governor.

But the other two proposals are just statutes. One requires presentation of a valid idenID to vote in person or proof of an ID to vote by mail. The other requires election audits by the auditor general or an independent auditor.

These proposals are too detailed to be proper for a constitution. Voter ID will eventually be rendered irrelevant by technology, whether by facial recognition software or computer verification. And no one will support election audits once the controversy over the 2020 election fades from memory.

This trend of amendment abuse is part of the general breakdown in political culture in America. Previously, legislative leaders would have denounced governors for excessive vetoes and unwillingness to compromise and would have invited the voters to install a governor from their party in the next election. But now that recourse to traditional politics is rejected by impatient and immature politicians.

This is just the start of amendment abuse. According to current polls, the 2022 election could well lead to four more years of mixed government with resulting conflict and stalemate. If that happens, the General Assembly will be ready to put all manner of statutes into the Constitution.

What can be done? Gov. Tom Wolf recently tried to get the courts to intervene in the amendment process, without success. Apparently, amendment abuse, though bad government, is not unconstitutional.

Fundamentally, the remedy here lies with the voters of Pennsylvania.

The best solution, of course, would be to elect leaders who will compromise their differences. However, that change would require a reset of the whole political atmosphere of the nation.

The easier course is simply for the voters to reject improper amendments. If this were done even one time, legislative leaders might abandon the amendment process as unproductive.

So, if voter ID and election audits do eventually make it onto the ballot, it is my hope that the voters will reject these proposals as improper subjects of amendment, even if they agree with their substance.

This may be a difficult sell to ordinary voters who have little interest in the niceties of constitutional structure. But it is necessary.

In the end, only the voters can prevent amendment abuse.