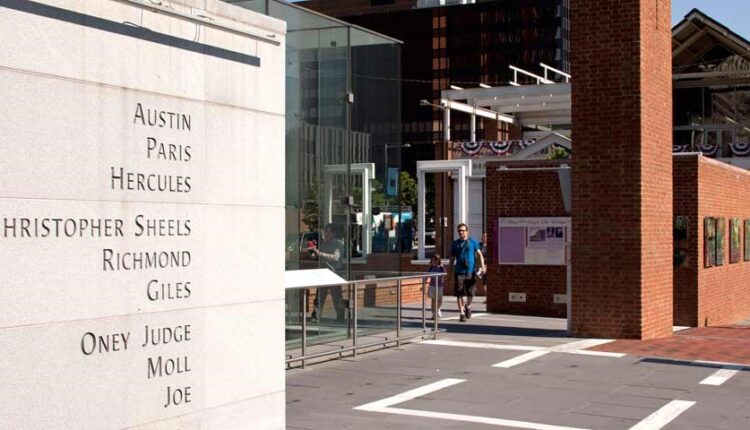 Exactly 226 years ago on May 21, 1796, one of the greatest escapes in American history took place. And it involved an enslaved Black woman named Oney Judge and an enslaving white president named George Washington. Here’s the background.

As an enslaving president, Washington moved to Philadelphia pursuant to the Federal Residence Act of 1790 wherein Congress selected this city as the nation’s first capital. A few months later during that same year, Washington began living at Sixth and Market streets in what was officially called The President’s House and unofficially known as America’s first “White House.”

Along with him was his “property,” which consisted of nine enslaved Black women, men, and children who he transported from among the 316 he held in bondage at his Mt. Vernon, Virginia plantation. But they weren’t actually “property.” They were human beings and their names were Austin, Christopher Sheels, Giles, Hercules, Joe Richardson, Moll, Paris, Richardson, and Oney Judge.

“Oney Judge’s escape demonstrated her almost unbelievable strength of character and courage. For a young enslaved woman to stand up to her enslaver- a man who was the most powerful person in the country at the time- and seize her birthright as a free person is an inspiration that rings across the generation.”

She was the younger half sister of Austin and from the age of approximately ten was held in bondage as Martha Washington’s personal servant and needlework expert. Born sometime around 1773, she was about 17 years old when she was transported to Philadelphia in November 1790. There is no record of her exact date of birth because, as an enslaved person, she was considered to be nothing more than mere property- a “species of property” as described by George Washington. However, she was much more than that and much better than that. She was amazing. She was brave. She was relentless.

After discovering that she was to be given away as a wedding gift, meaning as a mere thing, by Martha to Martha’s eldest granddaughter, Oney Judge finally had enough and planned an escape with the active assistance of Philadelphia’s large “free” Black population. As she personally explained it, “I had friends among the colored people of Philadelphia … [and] had my things carried … [out secretly by those friends] beforehand, and left Washington’s house while they were eating dinner.”

Oney Judge executed her plan on May 21, 1796 going from Pennsylvania, then apparently through New York, and ultimately settling in Portsmouth, New Hampshire where she married a free Black sailor named John Staines and had two daughters (namely Eliza and Nancy) and one son (namely Will). Unfortunately, her husband and children predeceased her. Also, although Oney Judge had been able to escape and therefore avoid being given away as an inanimate gift, her younger sister Delphy did not fare so well. In fact, it was Delphy who became the replacement wedding gift for Martha’s eldest granddaughter.

Even though her daring escape was successful, it was not restful because George, primarily as a result of Martha, was nearly unyielding in trying to hunt down and capture her. As reported by Monica Marie Zorrilla at billypenn.com, “[In 1799], Martha wrote to William Whipple — ‘a sort of Customs Enforcement Official in New Hampshire’- asking him to seize … [Oney] at once.”

Interestingly, Oney Judge agreed to voluntarily return to the Washingtons but would do so only upon two conditions: One- that her children would be free. Two- that she would be freed when George and Martha died. Whipple determined that was a reasonable compromise, so he relayed Oney Judge’s offer to the Washingtons. But Martha was livid and rejected the offer. She then demanded that Oney Judge return immediately. In her response, Oney Judge told Martha to go to hell. Well, that’s not what she really said. But you can bet it’s what she really meant.

Despite the Washingtons’ hounding, Oney Judge lived as an otherwise “free,” albeit fugitive, woman until her death at about age 75 in New Hampshire on Feb. 25, 1848, nearly 50 years after George’s 1799 and Martha’s 1802 respective deaths.

Fourteen years ago in 2008, at the request of Avenging The Ancestors Coalition (ATAC) — of which I am a proud founder- and in honor of ATAC’s celebratory “Oney Judge Day” on the 160th anniversary of her Feb. 25, 1848 date of death (which was chosen because she has no official date of birth), Mayor Michael Nutter issued an official mayoral tribute to Oney Judge. And City Councilmember Blondell Reynolds Brown, along with Council President Anna Verna, issued an official City Council Citation to Oney Judge.

ATAC is the organization that, from 2002 to 2010, led the battle to memorialize Oney Judge and the other eight African descendants enslaved by Washington here in Philadelphia at America’s first “White House.” That battle was successful because, on Dec.15, 2010, it resulted in the grand opening of the first slavery memorial of its kind on federal property. For more information, visit the President’s House/Slavery Memorial at Sixth and Market streets and also log on to avengingtheancestors.com.

But before visiting that Slavery Memorial or logging on to that site, you should learn everything there is to know about Oney Judge and her nerves-of-steel escape by reading “Never Caught: The Washingtons’ Relentless Pursuit of Their Runaway Slave, Ona Judge,” written by award-winning author Erica Armstrong Dunbar, a distinguished professor of history at Rutgers University.

By the way, although she was and is popularly referred to as “Oney,” a name that she herself often acknowledged, her actual name is “Ona Maria.” Therefore, in her honor and because she deserves the utmost respect, I celebrate her on May 21 and every day for the unimaginable courage she displayed exactly 226 years ago. I also revere her by the official name she used after her heroic escape and after her wonderful wedding day: Mrs. Ona Maria Judge Staines.

What a great woman! What a great escape! What a great movie her life and story would make! Tell somebody to contact Spike Lee, Ava DuVernay, Ryan Coogler, Kasi Lemmons, or F. Gary Gray. Seriously.

Opinion contributor Michael Coard, an attorney and radio host, is a columnist for the Philadelphia Tribune, where this piece first appeared. His work appears on Tuesdays on the Capital-Star’s Commentary Page. Readers may follow him on Twitter @michaelcoard.

Flush with cash, Pa. could see its surplus go down the drain | Analysis