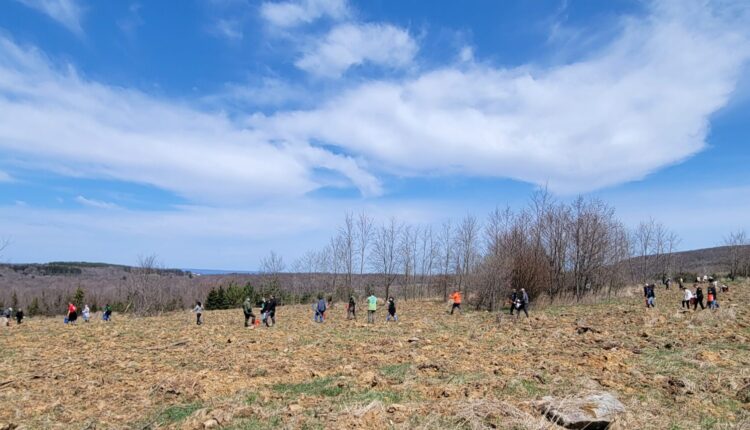 On Earth Day, volunteers gather at Flight 93 Memorial to renew the earth – and to remember

Droves of volunteers carry buckets and and shovels down to the meeting area after planting trees at Flight 93 National Park (Capital-Star photo by Cassie Miller).

STOYSTOWN, Pa. – Ken Nacke’s brother, Louis Joseph Nacke II, was a passenger on United Airlines Flight 93, which plunged into a field in this Somerset County community on September 11, 2001, killing all aboard.

“It’s like coming home,” Nacke, of Baltimore, said Friday as he paid tribute to his brother and others who died that day, joining volunteers to plant a variety of native tree seedlings at the Flight 93 National Memorial.

“I believe – every time I’ve come here – you get that same sense of feeling,” Nacke said, adding that the surroundings and culture of western Pennsylvania remind him of his childhood home in southern New York.

Pointing in the direction of his favorite area of the memorial, which is the “bowl,” where much of the memorial lies tucked into the contours of the surrounding hillsides, Nacke said: “For me, it brings me back to my childhood and when my brother was alive and running around in the landscape like this.”

The 2,220-acre national memorial sits high in the Laurel Highlands, on the site of a former strip mine, where it leaves visitors with a serene vista in every direction.

At its heart, is a large stone marking the impact site of United Airlines Flight 93 on the morning of September 11, 2001 when the flight was diverted to western Pennsylvania by passengers who fought hijackers for control of the plane that was destined for the U.S. Capitol.

Nacke is just one of more than 500 volunteers — approximately 220 on Friday and another 200 on Saturday –  who will assist in an annual seedling planting effort, which is done through a partnership between the National Park Service, Friends of Flight 93 National Memorial, and the National Park Foundation.

The volunteers come from as close as Jerome, Pa. and as far away as Florida for the event.

“To me, it was important not to disrupt that,” Nacke told the Capital-Star, “but to also make it a place to come where the 40 heroes are cherished and remembered for generations to come.”

Volunteers plant trees on a hillside overshadowed by the Tower of Voices (Capital-Star photo by Cassie Miller).

Steve Clark, who is superintendent of five sites under the National Park Service in Pennsylvania, including the Flight 93 Memorial, told the Capital-Star that he thinks the tree planting efforts are so popular because they give people a way to be a part of “the evolution of the memorial.”

“I think people just want to be a part of it – to give back,” he said. “The story is just so raw to most Americans.”

Clark noted that “40 to 50 percent of Americans today weren’t even born in 2001.” Because of that, he says it’s the park’s job to “keep the story relevant for the next generation.” 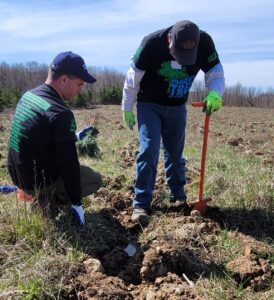 The tree planting initiative, which was part of park architect Paul Murdoch’s original design, began in 2012. And it has been an annual event at the park for the last decade as it progresses toward Murdoch’s ultimate goal of 150,000 seedlings planted at the memorial.

This year, volunteers will plant the remaining 15,000 seedlings, marking the last year for the decade-long planting initiative.

“This was all part of Paul Murdoch’s brilliant design,” Clark said. “It’s kind of a great milestone to put in your pocket and say ‘we worked hard at it.’”

Before planting efforts got underway Friday, which also marked Earth Day, Clark said that volunteers have, so far, planted approximately 137,000 native seedlings at the memorial, and will likely exceed the 150,000 goal by about 2,000 seedlings.

While the planting will end after this year, Clark said that annual maintenance projects will keep volunteers meeting in the future.

Donna Gibson, executive director of the Friends of the Flight 93 National Memorial, volunteered at the first-ever planting event a decade ago. Her involvement with the site has only grown since.

“It really resonated with me and then it became a passion for me to be here every year,” Gibson said, adding that she’s starting to see the site’s gradual transformation take shape.

“To have been here from the beginning, and now that I’m coming here on a daily basis, and you drive by and you see some of the trees starting to take root and starting to grow … it’s really a great feeling,” she said.

Journalists Cover the Gamut, From Rising Insulin Costs to Delays in Autism Care for Children