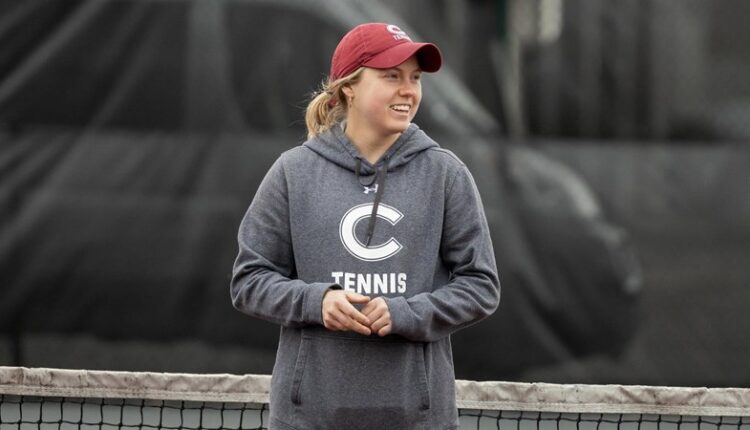 BETHLEHEM, Pa. – Lehigh Athletics has announced the hiring of Olivia Leavitt as head coach of the Mountain Hawks’ women’s tennis program. Leavitt, who will be taking on her first head coaching position, comes to Lehigh after spending the last two seasons in the Patriot League as the assistant men’s and women’s tennis coach at Colgate.

“I would like to thank Joe Sterrett, Sue Troyan, Chris Wakely and the rest of the Lehigh Athletics staff for this amazing opportunity,” Leavitt said. “I am ecstatic to be joining the Lehigh Athletics community as the next head coach of women’s tennis. I look forward to building a championship program anchored in Lehigh’s values: Learn. Grow. Lead.”

“We’re excited to have Olivia join our team,” Deputy Director of Athletics Sue Troyan said. “Her maturity and enthusiasm throughout the interview process reflected a level of passion and commitment that was compelling and reminiscent of some of the highly successful Lehigh coaches who began their careers with similar backgrounds.”

Leavitt’s two seasons at Colgate were highlighted by an 11-win season for the women in 2021-22 and a Patriot League semifinal appearance for the men in 2021.
3
Prior to her arrival at Colgate, Leavitt spent one season as an assistant coach at Babson, which followed a standout playing career at Brandeis.

In her time at Babson, Leavitt helped lead the Beavers’ men’s team to its first national ranking in program history and helped bring in nationally-ranked recruiting classes for the Babson men and women’s programs.

Leavitt entered the coaching ranks following a successful career as a student-athlete at Brandeis, where she won 44 singles matches and 52 doubles matches. She helped the judges rise as high as No. 8 in the national rankings, and the program made a regional final in its first NCAA tournament appearance in 2018. Leavitt was a three-time All-University Athletics Association doubles selection and three-time ITA Scholar-Athlete award recipient.

The Falmouth, Maine native captained the judges in her senior season and was a three-year member of the Brandeis Student-Athlete Advisory Committee, serving as President during the 2018-19 school year.

“Olivia has earned a positive reputation in the women’s tennis coaching community as one of its rising stars, and we are excited to welcome her to our Lehigh family,” said Lehigh Associate Director of Athletics Chris Wakely, who led the search process. “She will bring a growth mindset to her role as head coach with an emphasis on the development of our student-athletes in all aspects of their Lehigh experience, this was evident in her collegiate playing and coaching experiences. Olivia has demonstrated a strong understanding of the academic and athletic demands of the Patriot League and an ability to recruit through her coaching experiences at Colgate. We are eager to begin working with Olivia as she leads our women’s tennis program at Lehigh.”

“Olivia’s ability to cultivate meaningful relationships coupled with her dedication for learning and willingness to collaborate will positively inform her approach to recruiting talented student-athletes,” added head women’s soccer coach Lauren Calabrese, who served on the search committee.

In addition to her college playing and coaching experience, Leavitt served as an assistant tennis professional at Portland Country Club in 2016 and also worked camps at Bowdoin College and North Yarmouth Academy.

Leavitt is a 2019 graduate of Brandeis with a bachelor’s degree in business. She is currently pursuing an online Master of Science degree in sport management from the University of Florida.