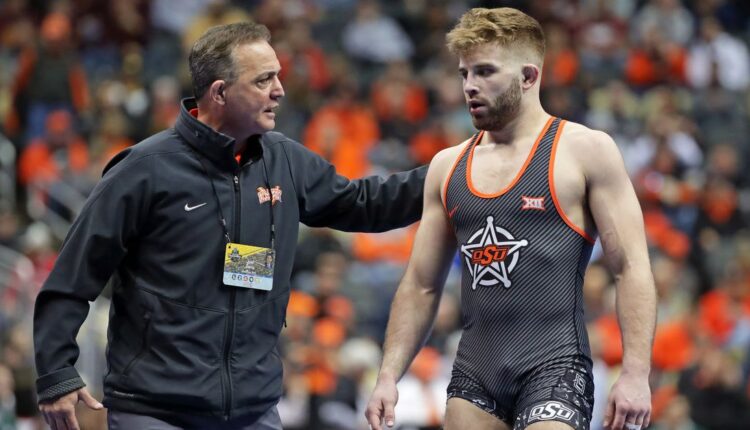 The fourth-ranked Oklahoma State wrestling team starts its dual season this weekend in Pennsylvania with trips to Drexel and No. 10 Lehigh.

The dual against Drexel (2-0) at 6 pm Friday in Philadelphia will serve as a warmup before a top-10 showdown at noon Saturday against the Mountain Hawks in Bethlehem, Penn. Drexel’s only ranked wrestler is No. 12 Ebed Jarrell at 165 pounds, while Lehigh’s lineup features eight ranked wrestlers.

If OSU wins both duals Cowboys coach John Smith will past Bobby Douglas (Iowa State/Arizona State) for sole possession of fifth place on the all time wins list with 428 dual victories.

Here are five things to watch this weekend:

Freshman Reece Witcraft will start and not use a redshirt this season. He went 4-0 this past weekend while wrestling unattached at the OCU Open and racked up 26 team points. He takes over the 133-pound spot for Daton Fix, who is using an Olympic redshirt after being the NCAA runner-up last season. Smith did not indicate whether Witcraft will wrestle both duals or whether Witcraft and redshirt freshman Conner Wilson will split the action. Lehigh has a ranked wrestler at 133 with senior Nick Farro at No. 14

Witcraft was the No. 24-ranked recruit in 2019 and finished his prep career at Broken Arrow in Tulsa with two state individual titles and won the Ironman tournament.

The dual against Lehigh figures to be a tight one, and OSU will need their bonus machine in No. 4 Nick Piccinini to deliver. The two-time All-American at 125 went undefeated during the regular season with team highs in bonus-point wins, technical falls, dual takedowns and nearfalls. The New Yorker will have some added motivation with his friends and family making the about 4-hour trip to see him compete in person.

Redshirt sophomore Kaden Gfeller (141) and redshirt senior Joe Smith (174) were two starters that did not compete at the OCU Open. No. 10 Gfeller is down one weight from last season, while No. 6 Smith is up one. Both weights are better natural fits for them, especially for Gfeller. Smith will have the most must-watch match of the weekend against No. 2Jordan Kutler of Lehigh. Smith has lost his previous two matches against Kutler.

Eighth-ranked Boo Lewallen (149) started the season by winning the OCU Open after missing most of last season with shoulder injuries. The 2018 All-American tried to comeback last January, but re-injured his shoulder late in the match and had to injury default. If Lewallen can stay healthy he can be a contender to earn All-American status again in March.

John Smith said redshirt junior Dakota Geer or redshirt freshman Anthony Montalvo will wrestle at 184 and the other one will go at 197. 4 Geer split time at the weights last season, earning All-American status at 184 after going 15-4 at 197 with Preston Weigel out. Montalvo was 17-3 last season as a red shirt in open tournaments. Lehigh has ranked wrestlers at both weights with No. 25 Chris Weiler (184) and No. 14 Jake Jokobsen (197). Geer, who transferred to OSU last season from Edinboro, beat Weiler 13-5 in last season’s dual.