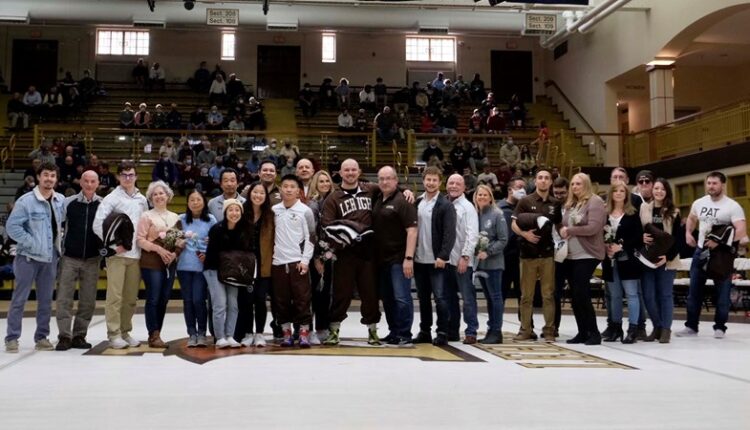 No. 23 Lehigh Takes Down Bucknell 21-12 For Senior Day Victory

BETHLEHEM, Pa. – No. 23 Lehigh honored its eight member senior class and then closed out its home schedule with a 21-12 victory over Bucknell Saturday inside Leeman-Turner Arena at Grace Hall. The Mountain Hawks dropped the opening bout but reeled off five straight wins to take control.

Senior Jordan Wood picked up a first period pin in his final Grace Hall appearance and first year Max Brignola clinched the victory with a decision at 149.

“Having all those guys out created an opportunity for some other team members to get on the mat and they did a nice job,” Lehigh head coach Pat Santoro said. “They fought hard. The bottom line is always about effort. ‘Ws’ will come with really great effort. It wasn’t as exciting as last night with the back and forth but we won the matches we needed to win today and that was really important this time of year.”

The dual began at 165 with the only matchup of top 33 wrestlers. Sophomore Brian Meyer scored the first takedown against Zach Hartman but Hartman came back with three takedowns to take the lead. A late Meyer escape prevented the major decision but Hartman’s 10-3 win put the Bison in front.

Jake Logan started the Lehigh run with a 9-5 decision over Sam Barnes at 174. Logan scored two takedowns in each of the first two periods to pick up his second straight victory.

Sophomore AJ Burkhart followed up with a 5-1 decision over Logan Deacetis at 184. Burkhart’s win featured takedowns in each of the first two periods plus riding time advantage.

An 8-3 decision by JT Davis over Mason McCready extended Lehigh’s lead to 9-3 after four bouts.

Wood scored an early takedown against Luke Niemayer at 285 and then dumped him to his back before securing his third fall of the season in just 57 seconds. The pin gave Lehigh a 15-3 lead halfway through.

“That was awesome,” Santoro said. “You can’t finish in a better way than that. Jordan just does everything right so to finish your career at home with a pin, you can’t ask for anything better.”

At 125, Sheldon Seymour completed the five-bout run with a 2-1 win over Brandon Seidman. The wrestlers traded escapes but Seymour was the more aggressive wrestler throughout the bout and earned the deciding point on a stalling call against Seidman.

Bucknell won the next two bouts to climb back within 18-9 with two bouts remaining. Senior Satoshi Abe replaced the injured Malyke Hines at 133 but fell 11-5 to Kurt Phipps. A late takedown by Abe prevented the major decision. Drew Munch wrestled at 141 for Lehigh but fell 8-2 to 26th-ranked Darren Miller.

Brignola clinched the dual for the Mountain Hawks with a 6-3 decision over Kolby DePron at 149. Brignola scored two takedowns in the first period and added another in the second for his second consecutive dual win.

“We approached Max about this two weeks ago and he has been all in,” Santoro said. “You can see that he keeps getting better and better. There’s another level that we see in the room that the public hasn’t seen yet. He’s just getting there now so I’m excited to see where things go next week and at the conference and NCAA’s.”

The Bison finished the dual with a win as Nick Delp edged Luca Frinzi 2-0 at 157.

“Our senior class brought great leadership,” Santoro said. “They’re really tight, lifelong friends. They’re all about the team first. For all eight guys to have that type of influence on each other and the team, it has been pretty neat to see over the last five years.”

The Mountain Hawks will close out the dual season next Saturday when they visit No. 13 Arizona State. The match is slated for a 2 pm ET/12 pm MST start from Tempe, Ariz. Streaming video will be available on Pac-12 Insider and audio coverage will be provided on Fox Sports Radio 94.7 FM and 1230 AM in Easton and LVFoxSports.com.