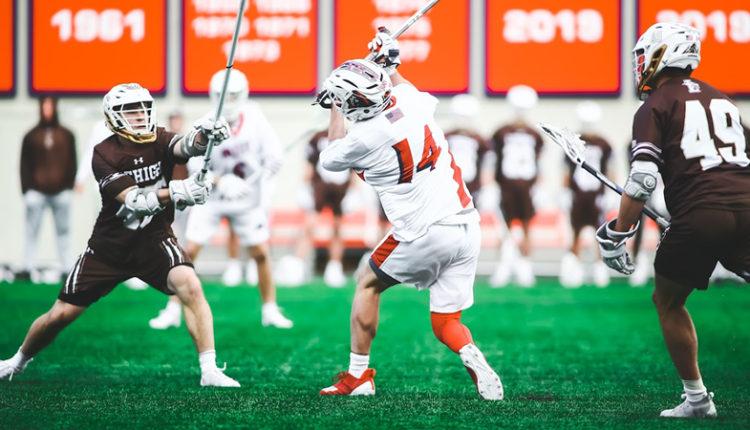 BETHLEHEM, Pa. – Putting its perfect 3-0 Patriot League record on the line, the No. 20 Lehigh men’s lacrosse team travels to Lafayette on Saturday to face the Leopards. Gametime is set for 12 pm on ESPN+. The Mountain Hawks are coming off a 12-10 nonleague win at Binghamton Tuesday, led by six goals and seven points from junior Christian Mule’.

Lehigh enters Saturday 5-3 overall. The Mountain Hawks only trailed once at Binghamton (2-1), but responded responded with a 3-0 run and never trailed the rest of the way. The Bearcats got within 11-10 with 5:24 remaining, but a big insurance goal from senior Tommy Schelling (assisted by classmate Cole Kirst) gave the Mountain Hawks insurance. Mule’ was the story offensively, scoring six goals on six shots, one of which was a behind-the-back beauty that was the No. 6 Play of the Day on ESPN’s SportsCenter. Schelling finished with that big insurance goal and four assists while Kirst posted one goal and two assists. Schelling moved up multiple spots on the Lehigh all-time career assists list, as he now has 69 – good for eighth. Sophomore Quinn Armstrong scored the Mountain Hawks’ first two goals of the evening.

Tuesday marked Lehigh’s final nonleague game of the season, as it’s Patriot League games from here on out. The Mountain Hawks are one of two undefeated teams in the league, along with Boston University. Army West Point, Loyola and Navy who all have one loss. After Saturday, Lehigh will host Bucknell (Apr. 10) and Boston University (Apr. 23) while traveling to Colgate (Apr. 16) and Loyola (Apr. 29). The Mountain Hawks will look to continue their success against the Leopards, having won a program record 12 straight in the series and 20 of the last 21. Last season, the teams played twice as Sisselberger broke the Patriot League record for groundballs with 19 then two days later, broke his own mark by collecting 21 vs. the Leopards.

Lafayette stands 3-7 on the season, 0-4 in Patriot League play, but has had a number of close calls. The Leopards lost by just one against Binghamton (who is 2-0 in the America East) and only two vs. Loyola. Lafayette’s wins have come over VMI (14-6), preseason CAA favorite Drexel (13-11) and Sacred Heart (16-8). Peter Lehman – brother of former Lehigh women’s lacrosse and field hockey student-athlete Anna – leads Lafayette in assists (18) and points (37). Three others have 20+ points, including Kalman Kraham, who has 28 points via a team-leading 22 goals and six assists. Sean Rushton leads Lafayette in causing turnovers (11) while his 32 groundballs are second, only behind faceoff specialist Aidan Kelly, who’s won 80-of-169. Gabe Cummings has seen the majority of time in goal, posting an 11.45 goals against average and 42.2 save percentage.

The Mountain Hawks will return home on Sunday, Apr. 10 to host Bucknell at 1 pm on CBS Sports Network.