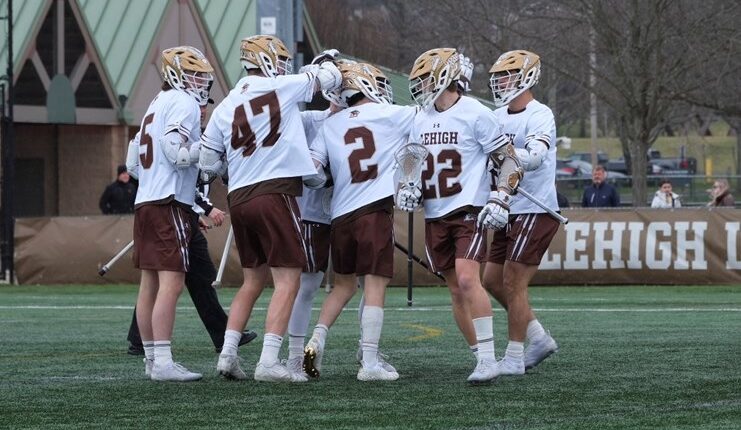 BETHLEHEM, Pa. – Playing its final non-league game of the regular season, No. 20 Lehigh heads to Vestal, NY Tuesday to battle Binghamton. Game time is set for 5 pm with coverage on ESPN+. The Mountain Hawks will be looking to get back on the winning track heading into an April slate that includes five key Patriot League matchups.

The Mountain Hawks battled No. 5 Georgetown to the final whistle Saturday at the Ulrich Sports Complex but ultimately fell 13-11 in the top-20 clash. Lehigh overcame a five-goal halftime deficit to pull within one at the end of three quarters, but the visiting Hoyas outscored the Mountain Hawks 4-2 in the final period. Junior Christian Mule’ scored a team-high four goals to lead Lehigh’s offense while senior Matt Marker added a career-high three goals.

Along with Mule’ and Marker, four other Mountain Hawks scored one goal apiece. Being defended by first team All-American Will Bowen, senior Cole Kirst tied a career high with five points via a goal and career-high four assists. Senior Tommy Schelling had a goal and three assists.

Facing a strong Georgetown opponent in James Reilly, who had won 66.4 percent of his faceoffs entering the day, senior Mike Sisselberger won 17-of-29 on Saturday with a team-high 11 groundballs. Included was five wins in a row to finish the game. Sisselberger is now up to 246 career groundballs, moving him into third place in program history.

Lehigh and Georgetown were tied 4-4 after one before a 6-1 second quarter spurt put the Hoyas up 10-5 at halftime. The Mountain Hawks scored the only four goals of the third quarter to get within 10-9 but were never able to pull even.

Binghamton comes into Tuesday’s game with a 4-4 overall record. The Bearcats improved to 2-0 in the America East conference with a 12-8 home win over UMBC on Saturday. Binghamton also owns wins this season over Lafayette, Hofstra and Albany. Kevin Winkoff has been the top performer for the Bearcats offensively with 35 points on 22 goals and 13 assists. Winkoff leads Binghamton in all three categories. Daniel MacKinney (14) is the only other Bearcat with double digit goals this season. Matthew Desouza leads Binghamton with 42 groundballs, while Drew Furlong has 28 and a team-leading 11 caused turnovers. Teddy Dolan has started all eight games in goal, stopping 50 percent of the shots he has faced and posting a goals-against average of 12.49.

Lehigh has won both of the previous two meetings with Binghamton, claiming a 16-15 overtime win at Binghamton in 2010 and a 13-7 win at the Ulrich Sports Complex the following year. Tuesday’s game will be played 11 years to the day of the last meeting. Alex Drake scored the overtime game winner in the first meeting, played in Vestal, NY in March 2010.

The Mountain Hawks will be back on the road this weekend to face rival Lafayette on Saturday, with game time set for noon from Fisher Stadium in Easton, Pa.