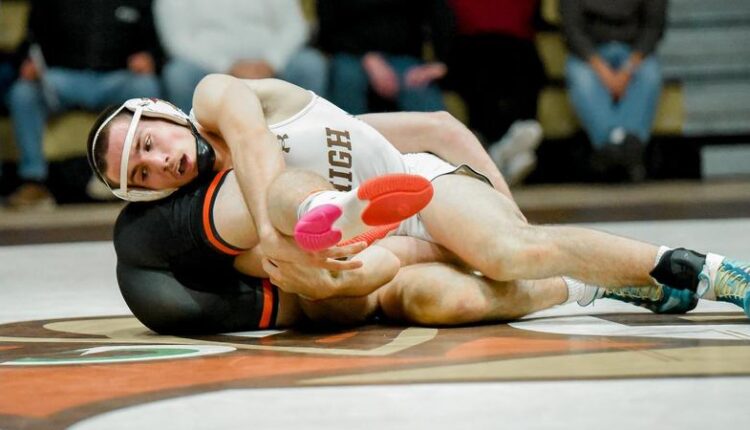 No. 20 Lehigh Tops Binghamton 26-12 Behind Bonus Wins From Hines, Brignola

VESTAL, NY-No. 20 Lehigh capped his weekend trip to New York with a 26-12 victory over Binghamton Sunday at the Events Center. The host Bearcats won two of the first three bouts before a technical fall by Malyke Hines and a third-period pin by Max Brignola propelled the Mountain Hawks into the lead for good.

In all, Lehigh won five of the nine contested bouts plus the Mountain Hawks earned a forfeit in the finale at 197. The Mountain Hawks are now 5-6 on the dual season, while Binghamton falls to 2-9.

The dual began at 285 where 21st-ranked Cory Day defeated first-year Nathan Taylor 3-1 on the strength of a second period reversal and riding time.

First-year Carter Bailey put the Mountain Hawks on the board with a 4-1 decision over Micah Roes at 125. After a scoreless first period, Bailey earned an escape and takedown early in the second and added riding time advantage.

Senior Jaret Lane bumped up to 133 where he wrestled Ivan Garcia, but fell 3-1, giving up a third period penalty point followed by a reversal.

The back-to-back bonus wins from Hines and Brignola turned a 6-3 deficit into a 14-8 advantage for the Mountain Hawks.

Hines was well on his way to a major decision victory over Christian Gannone at 141 but continued looking to score. He locked up a cradle for a takedown and four point near fall in the final seconds to secure a 17-2 technical fall in 7:00.

After needing injury time in the second period due to a cramp, Brignola trailed Michael Zarif 3-1 after two periods. Brignola picked up his first takedown of the bout late in the third and then after initially looking like he was going to release Zarif, stuck in a half nelson, securing the fall at the 6:34 mark.

Brignola rallies with the 📌 to win!

Making his season dual debut at 174, junior AJ Burkhart helped steer the Mountain Hawks back on track with a 6-4, sudden victory win over Will Ebert. Burkhart opened the first period with a takedown but was reversed late. Tied 2-2 entering the third period, Burkhart was reversed only to respond with a reversal of his own to tie the match at 4-4 sending it to sudden victory. Burkhart scored off a double leg shot 39 seconds into sudden victory to earn the victory, putting Lehigh up 17-12 with two bouts remaining.

AJ with the ✌️ in sudden victory!

In the only bout of the dual matching two ranked wrestlers, graduate student Tate Samuelson won 4-1 over Jacob Nolan on the strength of a first period takedown.

With the dual clinched in Lehigh’s favor, Binghamton elected to forfeit 197.

Lehigh improves to 7-0 all-time versus Binghamton.

The Mountain Hawks have two more road duals next weekend, beginning Friday when Lehigh battles Penn at the Palestra in Philadelphia. Match time is set for 6 pm with streaming video on ESPN+ and audio coverage on Fox Sports Radio 94.7 FM and 1230 AM and LVFoxSports.com.