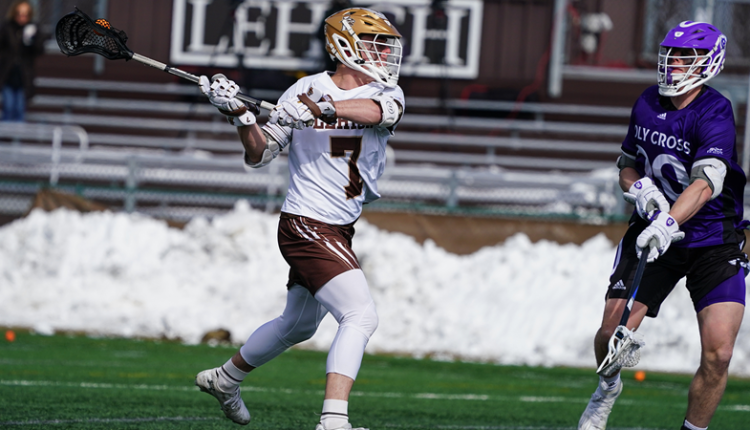 No. 20 Lehigh Heads to Colgate Saturday for Patriot League Showdown

BETHLEHEM, Pa. – The No. 20 Lehigh men’s lacrosse team will put its perfect Patriot League record on the line when the Mountain Hawks travel to Colgate on Saturday to face the Raiders. Gametime is set for 4 pm on ESPN+. Lehigh is coming off a 13-12 win against Bucknell Sunday to improve to 5-0 in league play.

Against the Bison, the Mountain Hawks used a 5-0 run to turn a 4-3 deficit into an 8-4 halftime lead. Senior Tommy Schelling scored three goals in that span, finishing the day with a season-high four goals and one assist. On Wednesday, he was named a finalist for the Senior CLASS Award. Sophomore Scott Cole finished with a career-high five points via three goals and two assists. Starting attackmen Christian Mule’ and Cole Kirst also tallied two goals and an assist each.

Lehigh scored three of the first four second-half goals to increase its run to 8-1, good for an 11-5 lead, but that’s when the Bison had an answer. Bucknell scored three straight, five of the next six and seven of the game’s final nine, but the Mountain Hawks held on. With Bucknell man-up in the final seconds, a turnover was collected by sophomore Nick Turrini to clinch the victory.

Senior James Spence was strong in goal, making 13 saves – 12 coming over the final three quarters. In the process, he moved past Todd Schreiner into second in program history for career saves with 613. He and the Lehigh defense held Bucknell scoreless for a stretch of 23:09 bridging the end of the first through third quarters (with Spence making six saves in that span). Graduate student Teddy Leggett helped anchor the defense as well, as he collected six groundballs to earn his first-career Patriot League Defensive Player of the Week. It was his fourth straight game with 6+ GBs (the first time that’s happened in his decorated career). Senior Mike Sisselberger was also named the league’s Faceoff Specialist of the Week (third time this season and league-record ninth time in his career) after winning 20-of-27 faceoffs. He was 15-of-18 over the final three quarters, coming against Bucknell’s Nick Crovatto, who had won 53.1 percent of his faceoffs on the season coming in.

The win was Lehigh’s third straight over Bucknell. The Mountain Hawks won seven in a row over Saturday’s opponent Colgate, but all have been competitive games with four coming by four goals or fewer.

Colgate enters Saturday 2-8, 1-4 in Patriot League play, but has had a number of close calls. The Raiders’ wins have come against Air Force (11-8) and Lafayette (14-7). Colgate’s last two games have been close against nationally-ranked opponents, falling at Harvard (7-6) and Army West Point (13-11). Brian Minicus leads Colgate in goals (28), assists (16) and points (44). Michael Minicus stands second in goals (17) and points (22). Aidan Murnane (13) leads the team in causing turnovers. Faceoff specialist Thomas Colucci leads the Raiders in groundballs (65) while winning 108-of-188 faceoffs (57.4 percent). Matt LaCombe has played every minute in goal, tallying an 11.96 goals against average and 53.3 save percentage.

Lehigh has won seven straight and 11 of the last 12 meetings vs. Colgate to pull within 28-21 in the all-time series. Last season, the Mountain Hawks picked up two wins over the Raiders – 15-10 in the regular season (at Colgate) and 13-9 in the Patriot League Semifinals (at Lehigh). The teams have played four times in the Patriot League Tournament since 2012 (2012, 2013, 2018 and 2021). Lehigh and Colgate didn’t play in 2020 due to the COVID-19 pandemic canceling the season. Despite the Mountain Hawks’ recent success, no game has been a blowout as all of the last seven victories have come by six goals or fewer, including four by four goals or fewer. The teams first played in 1956. Colgate won the first three meetings before Lehigh’s first win in 1960 by an 8-6 final.

After Saturday’s game, the Mountain Hawks will return home on Saturday, Apr. 23 to host Boston University at 3 pm on Senior Day.