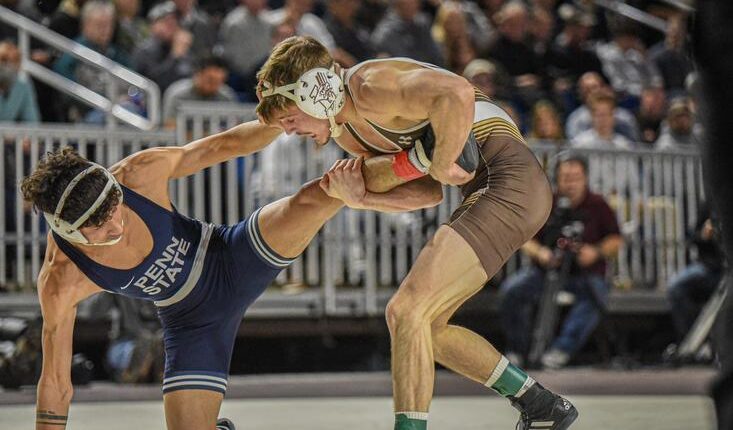 BETHLEHEM, Pa. – With final exams now complete, no. 19 Lehigh heads to New Orleans for the Collegiate Wrestling Duals, hosted by Journeymen Wrestling. The Mountain Hawks will face No. 25 Cal Poly and No. 7 NC State in pool action on Dec. 19 and will then face one of No. 3 Ohio State, no. 22 Northern Iowa or Lock Haven on Dec. 20. Prior to the exam break, Lehigh fell to No. 1 Penn State 24-12 in front of a 6,000-plus crowd on Dec. 4. The Mountain Hawks won four bouts against the defending national champion Nittany Lions, highlighted by an 11-9 decision by sophomore Michael Beard over then No. 1-ranked Max Dean at 197. Carter Bailey, Connor McGonagle and Josh Humphreys also picked up wins against the Nittany Lions.

Sophomore Michael Beard enjoyed the biggest win of his brief Lehigh career when he defeated Penn State’s top-ranked and defending national champion Max Dean 11-9, Dec. 4 at Stabler Arena. Facing his former team and teammate, Beard racked up four takedowns, including two in the final period, to improve to 5-1 on the season. A 2021 All-American for Penn State, Beard is off to a 5-1 start in his first season in the brown and white and is now ranked fourth in the nation at 197 according to InterMat. The victory over Dean earned Beard EIWA Wrestler of the Week honors on Dec. 5.

Lehigh has a wrestler ranked in seven out of 10 weight classes in the latest rankings from InterMat. Seven Mountain Hawks are also ranked by WrestleStat, while four Mountain Hawks are ranked by both FloWrestling and Amateur Wrestling News. A 5-1 start has moved sophomore Connor McGonagle into the top 10 in three of the four polls. Senior Josh Humphreys (157) and sophomore Michael Beard (197) appear in the top eight in all four polls, with Beard moving into the top six with his win over Penn State’s Max Dean. Graduate student Tate Samuelson is the fourth Mountain Hawk to appear in all four polls. InterMat and WrestleStat both rank wrestlers from 1-33, FloWrestling ranks 1-24 plus honorable mentions and AWN ranks 1-20.

Twelve Division I teams will be competing in New Orleans at the Collegiate Wrestling Duals, hosted by Journeymen Wrestling. The 12 teams have been split into red and blue pools with all teams wrestling two duals within their respective pools on Monday, Dec. 19 followed by one crossover dual on Tuesday, Dec. 20. Lehigh is in a red pool with No. 25 Cal Poly and No. 7 NC States. Its Tuesday match will be against one of No. 3 Ohio State, no. 22 Northern Iowa or Lock Haven. One blue pool features no. 6 Iowa State, no. 12 Cornell and Oregon State, while the other includes no. 1 Penn State, no. 21 North Carolina and Central Michigan.

Cal Poly enters the Collegiate Wrestling Duals with a 2-1 record. The Mustangs split two duals on Dec. 11, shutting out Lindenwood 50-0 before falling 22-12 to Minnesota. Cal Poly also recently competed at the Cliff Keen Las Vegas Invitational where the Mustangs finished in 24th place. Five Mustangs appear in the latest InterMat rankings, led by Bernie Truax, who is seventh at 197 and Oklahoma transfer Dom Demas, who comes in at No. 11 at 149. Jon Sioredas is in his seventh season as Cal Poly’s head coach.

Lehigh and Cal Poly will meet for just the eighth time and the first time since 2005 when the Mountain Hawks defeated the Mustangs 37-8 in the opening round of the NWCA National Duals in Cleveland. Cal Poly edged Lehigh 18-17 in January 1998. The first five meetings took place in the 1970s.

NC State comes into the Collegiate Wrestling Duals with a 5-0 record. The Wolfpack are coming off of a second place finish at the Cliff Keen Las Vegas Invitational with Trent Hidlay (184) and Isaac Trumble (197) capturing individual titles. In its most recent dual action, NC State defeated Central Michigan and Illinois, Nov. 18 in Albany, NY Eight Wolfpack wrestlers appear in the latest InterMat rankings, led by Hidlay, who is ranked second at 184. Trumble and Ed Scott (157) are also ranked in the top 10 in their respective weight classes. NC State has won the last four ACC Tournament titles. Pat Popolizio is in his 11th season as NC State’s head coach.

Monday’s dual with NC State will also mark the first meeting between Lehigh and NC State since the 2004-05 season. Lehigh leads the series 9-0-1 and has won seven straight duals since the lone tie in 1990. These teams met for seven straight seasons between 1998-99 and 2004-05.

Lehigh will be off from dual competition for the rest of the calendar year and will open 2023 portion of its schedule with road duals at Cornell and Binghamton, Jan. 14-15. The Mountain Hawks will keep busy however, as a contingent of Lehigh wrestlers are expected to compete at the Dec. 22 Wilkes Open, the Ken Kraft Midlands Championships, Dec. 29-30, and the David H. Lehman F&M Open on Jan. 6.

Sudden Ebola outbreak on the wane, but spillover is still a high risk