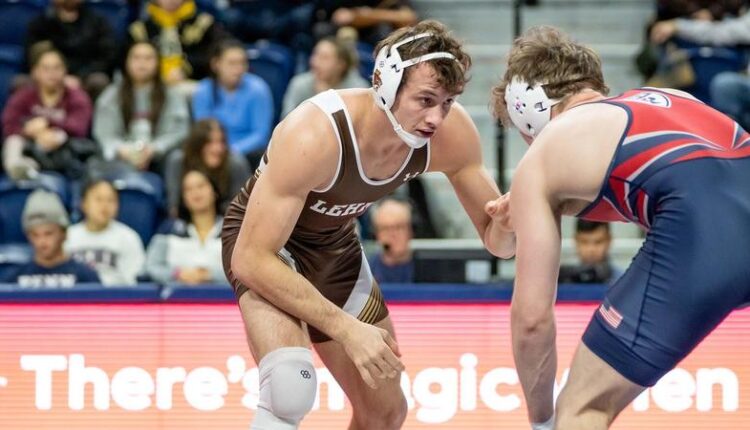 PHILADELPHIA – Three Mountain Hawks followed up 2-0 showings last weekend with victories but No. 19 Lehigh fell to Penn 23-11 Friday night at the Palestra. The host Quakers won seven bouts overall and claimed three of the four bouts decided by two points or fewer to defeat the Mountain Hawks for the second straight season.

Sophomore Malyke Hines (141), graduate student Tate Samuelson (184) and sophomore Michael Beard (197) followed up 2-0 weekends at Cornell and Binghamton with wins Friday night, but the Mountain Hawks fell to 5-7 on the dual season.

“We had opportunities to win tonight,” Lehigh head coach Pat Santoro said. “The effort was good. The difference was that in some of these key matches that were tight, we went for the easy win. We weren’t ready to grind. We were in position to win close the match out or finish a takedown. A little better effort in certain areas and we win three more matches.

“At this time of year you need to be making those tough decisions and be willing to score those hard points.”

The dual began at 125 with Ryan Miller edging first-year Carter Bailey 4-3. Miller scored a takedown in the first period, while Bailey answered in the second and trailed 4-3 after two periods. In the third, Bailey was unable to get out from bottom as Miller erased Bailey’s slight riding time advantage and remained on top for the rest of the period.

With Connor McGonagle unavailable, first-year Killian Delaney bumped up to 133 where he battled eighth-ranked Michael Colaiocco, dropping a 13-4 major decision.

Hines put Lehigh on the board with a 7-1 decision over Carmen Ferrante, scoring takedowns in the first and third periods, plus a second period escape, a stalling point and riding time advantage.

“Malyke started the year off trying to figure out a new weight class,” Santoro said. “After Christmas he went to the F&M Open and started feeling like ‘I am still really good.’ He’s realizing that he’s a guy that can be on the podium in March and he’s starting to wrestle that way. I’m excited to see him over the next few weeks.”

Neither Lehigh’s fifth-ranked Josh Humphreys nor Penn’s No. 12 Anthony Artalona were in the lineup at 157 so sophomore Paul Watkins faced Cole Spencer. A Watkins takedown in the third tied the bout at 4-4 and Watkins went to work from the top position where riding out would have put him over a minute of riding time advantage. Looking to hold on in the final seconds, Watkins fell victim to a reversal, which gave Spencer a 6-4 lead and put Penn up 13-3 at intermission.

The Quakers came out of intermission with two more victories as Lucas Revano won a 12-3 major decision over first-year Connor Herceg at 165 and Nick Incontrera followed with an 8-3 decision over sophomore Jake Logan at 174.

Samuelson picked up Lehigh’s second win of the night, defeating Max Hale 4-2 on the strength of a first period takedown and strong third period ride.

Beard then followed with the only bonus points of the night for the Mountain Hawks, using six takedowns and a pair of four point near falls to win a 20-4 technical fall over Cole Urbas in 3:37.

The Mountain Hawks will head to Navy for a Saturday night dual against the Midshipmen. Match time is set for 7 pm from Alumni Hall in Annapolis, Md., with streaming coverage on ESPN+.

Of more than 7,500 threats against members of Congress in…