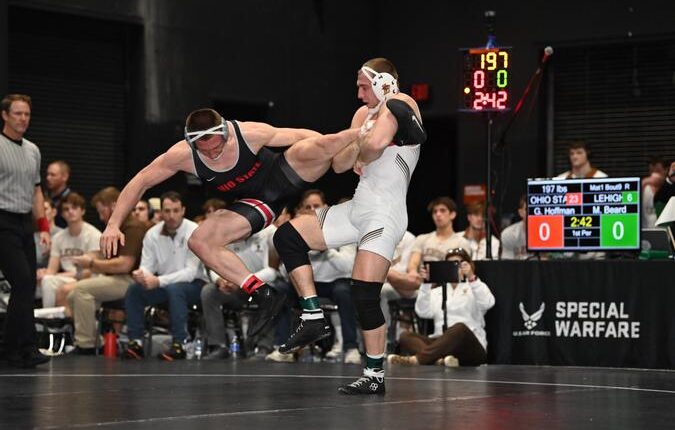 No. 19 Lehigh Drops Final Match in New Orleans to No. 3 Ohio State

NEW ORLEANS-No. 19 Lehigh closed out action at the Collegiate Wrestling Duals with a 23-12 loss to No. 3 Ohio State Tuesday afternoon. The Mountain Hawks won four bouts against the Buckeyes, but Ohio State posted a pair of bonus point wins and benefitted from a forfeit to claim third place in the red pool.

Senior Josh Humphreys completed a 3-0 event with a victory for the Mountain Hawks, who fall to 4-5 on the dual season.

The dual began with first-year Carter Bailey winning a 6-0 decision over Andre Gonzales at 125. Bailey escaped in the second period and rode out the third, adding a late four point near fall to stake Lehigh to a 3-0 lead.

With sophomore Connor McGonagle and senior Jaret Lane both banged up following Monday’s duals, the Mountain Hawks had to forfeit 133. Ohio State (6-1) then won the next three bouts to take a 16-3 lead.

The Buckeyes’ Dylan D’Emilio won a 3-1 decision over Malyke Hines at 141 and third-ranked Sammy Sasso won a 10-2 major over Max Brignola at 149.

Lehigh then shuffled his lineup, sending Manzona Bryant IV out against Gavin Brown at 157, but Brown led 2-1 after one period and went on to a 6-3 victory, adding two near fall points late before a Bryant reversal right before the final buzzer.

Humphreys moved up to 165 and defeated Isaac Wilcox 5-3. Wilcox was subbing for the injured and nationally-ranked Carson Kharchla. Humphreys conceded a takedown in the first period but scored a takedown early in the second and then rode out to lead 3-2 after two. An early escape in the third plus riding time advantage secured the 5-3 decision.

Ohio State’s top 10-ranked wrestlers at 174 and 184 secured wins to put the Buckeyes up 23-6 as Ethan Smith won a 13-4 major over Jake Logan and Kaleb Romero defeated Tate Samuelson 10-4.

Sophomore Michael Beard collected Lehigh’s third win of the dual and his second in three bouts against ranked opponents in New Orleans with a 5-3 decision over Gavin Hoffman at 197. Beard scored takedowns in each of the first two periods and added a second period escape .

In the final bout of the dual, first-year heavyweight Nathan Taylor defeated Mike Misita 6-2. Taylor gave up the first takedown but came back with a reversal and then added a second period escape and third period takedown plus riding time.

The Mountain Hawks will be off from dual competition until the weekend of Jan. 14-15 when they hit the road to face Cornell and Binghamton. The Jan. 14 Cornell dual will mark the 100th meeting in Lehigh’s third most contested series (Penn State, Navy).