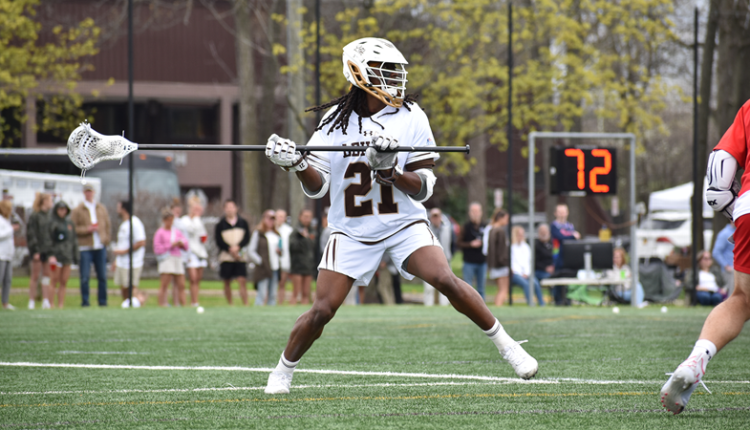 BETHLEHEM, Pa. – After a 31:06 stretch which saw each team score just one goal, the Lehigh men’s lacrosse team netted goals with 2:26 and 1:04 remaining in the fourth quarter to pull even at eight. However, no. 15 Boston University responded with the game-winner with five seconds remaining to defeat the Mountain Hawks, 9-8 on Saturday at the Ulrich Sports Complex on Senior Day. The win secures BU the No. 1 seed in the upcoming Patriot League Tournament. Despite the loss, Lehigh stood tied for second at 5-2 in league play and with a win at Loyola on Friday, would clinch the second seed and bye into the Patriot League Semifinals.

“Give a lot of credit to BU and give a lot of credit to our guys,” said Lehigh head coach Kevin Cassese. “We certainly put on a show today. It was a fast-paced game. I thought both goalies played really well. I thought both defenses played really well. It was a battle in between the restraining lines. Both teams left everything on the field today.

“Feel bad for our seniors on Senior Day,” Cassese continued. “Really wanted it for them to be able to get a win, but Boston wanted to win as well and all the credit goes to them for making one more play than we did in the end and boy was it a special play.”

Both defenses were the story as the Mountain Hawks (fifth nationally in scoring defense entering the day) held Boston University (15th in scoring offense) scoreless for a stretch of exactly 25 minutes bridging the second through fourth quarters. The Terriers held Lehigh to just one goal in that stretch.

Roll the tape from a back-and-forth battle in which we fell just short 📹 pic.twitter.com/BtdLV7CErB

— Lehigh Lacrosse (@LehighLacrosse) April 24, 2022 The Mountain Hawks ended up holding Boston University to single-digit goals for just the second time this season. Lehigh also held the Terriers scoreless in a quarter for the first time this season as well (in the third).

Offensively, junior Christian Mule’ scored four goals (on five shots) and dished an assist, while senior Tommy Schelling had five assists (just one shy of a career high). Sophomore Scott Cole scored Lehigh’s first two goals of the game. Junior Justin Tiernan posted his first points of the season, tying a career-high three points in the process with two goals and an assist.

After BU scored first at the 9:45 mark, Cole answered with the final two goals of the quarter for either side, including a highlight-reel behind-the-back goal at the 3:25 mark.

— Lehigh Lacrosse (@LehighLacrosse) April 24, 2022 The Terriers’ offense came alive in the second, though, scoring six goals over the first 9:24 to take a 7-4 lead. Mule’ responded with his second of the second quarter at 3:32 on the clock to pull Lehigh within 7-5 at the half. Earlier in the stanza, Mule’s first goal of the afternoon marked his 100th-career point.

Take a look at career point # 1⃣0⃣0⃣ for Christian Mule’ from that first half.

— Lehigh Lacrosse (@LehighLacrosse) April 23, 2022 A defensive third quarter saw eight combined saves from the goaltenders, with the only goal coming with 15 seconds on the clock, to pull the Mountain Hawks within 7-6 after 45 minutes of play.

BU retook a two-goal lead early in the fourth, but Lehigh wouldn’t quit. Tiernan from Schelling got the Mountain Hawks within 2:26. Then 1:22 later, Tiernan found Mule’ who put home his fourth to even the score with 1:04 remaining.

HUGE goal by Justin Tiernan to get the Mountain Hawks back within one with 2:26 left.

What passes and we are tied!

— Lehigh Lacrosse (@LehighLacrosse) April 23, 2022 The Terriers won the ensuing faceoff and after a timeout, Timmy Ley unleashed a hard backhand bounce shot into the back of the net with just five seconds remaining, giving BU the 9-8 win.

Final shots were 32-28 in favor of the Terriers while BU also held a 34-30 edge in groundballs. Senior James Spence was sensational in goal, making 14 saves, across the Terriers’ Matt Garber, who stopped 10-of-18 sent his way. Senior Mike Sisselberger won 8-of-21 faceoffs with four groundballs.

“The defense settled in during the second half,” said Cassese. “Our second quarterer was tough, but after that, we really shut the door down. I thought a big part was our groundball play. We were able to come up with some big groundballs. We were able to clear the ball pretty effectively in the second half (13-of-14).We played more offense and BU just played really good defense.I thought our defense did a nice job giving us some opportunities to eventually tie the game up.

“Unfortunately, we couldn’t score the one to win it in the end and they did.”

The Mountain Hawks close out the regular season next Friday, Apr. 29 at Loyola. Gametime is set for 6 pm on CBS Sports Network.

More diverse candidates are on the ballot for Harrisburg in 2022, but Latinos are largely left out