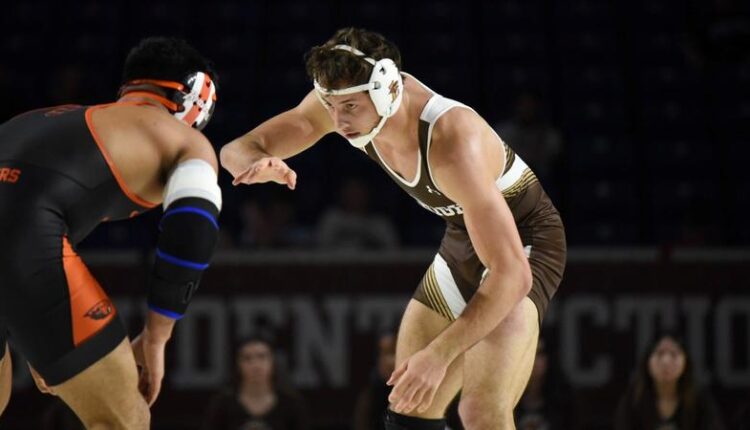 No. 14 Lehigh to Battle Two Oklahoma Foes Saturday in Bethlehem

BETHLEHEM, Pa. – One day. one city Two duals. Two teams from Oklahoma. That’s what the Mountain Hawks are facing on the second weekend of the dual season. Lehigh will welcome No. 11 Oklahoma State to Leeman-Turner Arena at Grace Hall Saturday at noon before heading over to nearby Liberty High School to face Oklahoma at 3 pm as part of Journeymen WrangleMania. The Mountain Hawks opened the dual season with wins over No. 19 Oregon State and Sacred Heart, which helped Lehigh jump three spots to No. 14 in the latest NWCA poll. Lehigh won six of 10 bouts against a tough Oregon State squad and then dominated Sacred Heart for its first shutout in nearly two years. The Mountain Hawks held a 37-0 edge in takedowns and did not allow an offensive point.

Lehigh secured a 2-0 opening weekend of dual action with a 44-0 shutout of Sacred Heart inside Leeman-Turner Arena or Grace Hall. The Mountain Hawks won all 10 bouts, securing bonus points in nine of the wins. Lehigh held a 37-0 edge in takedowns and did not allow an offensive point on the way to its first shutout since a 46-0 blanking of LIU on Jan. 31, 2021. Junior Elijah Jones delivered the only fall of the day, while sophomores Max Brignola and Michael Beard posted wins via technical fall. Connor McGonagle opened the dual with a win by decision, and the Mountain Hawks reeled off nine consecutive bonus wins after that to claim the first ever dual between the two programs.

Four Mountain Hawks made their dual debuts last weekend. Transfers Michael Beard and Tate Samuelson wrestled in both duals at 197 and 184, respectively while deferred first-years Carter Bailey (125) and Nathan Taylor (285) also wrestled their first official bouts for the Mountain Hawks. Taylor picked up a big win for Lehigh in the 20-13 victory over Oregon State, while Bailey wrestled in both duals, closing out the shutout of Sacred Heart with a technical fall victory. In their deferred years Bailey went 14-8 and won the Clarion Open, while Taylor posted a 27-10 mark in opens, with a win at the Edinboro Open. Taylor was recognized as Lehigh’s Deferred Eligibility Wrestler of the Year at the year-end Lewis Wrestling Dinner.

Oklahoma State opens its season Saturday in Bethlehem before heading to Bucknell for a Saturday evening dual. The Cowboys were 13-4 in duals last season and went on to finish fourth at the Big 12 Tournament and 14th at the NCAA Championships. Oklahoma State returns a pair of 2022 All-Americans in Daton Fix and Dustin Plott. Fix is ​​a three-time NCAA finalist who is the highest-ranked of the nine ranked Cowboys. Oklahoma State has won a NCAA-best 34 team national championships in wrestling and has a Division I-best 143 individual national champions and 482 All-Americans. American wrestling legend John Smith is in his 32nd season as head coach at his alma mater.

This will be the 14th all-time meeting between Lehigh and Oklahoma State with the Cowboys leading 11-2. Lehigh won Oklahoma State’s last visit to Bethlehem in 2019. The Mountain Hawks’ other victory came at the 2008 Northeast Duals in Pat Santoro’s first season. Lehigh is 2-3 against Oklahoma State under Santoro.

Oklahoma opens its dual season at Journeymen WrangleMania, where the Sooners will face Buffalo and Lehigh. The Sooners sent a large contingent to last weekend’s Michigan State Open and came away with nine top-five finishers. Josh Heindselman, Joey Prata and Mosha Schwartz all logged runner-up finishes to lead the way. Oklahoma has seven wrestlers in the latest InterMat rankings, led by Prata who is 14th at 125, Mitch Moore (No. 16 at 149) and Heindselman (No. 17 at 285). Lou Rosselli is in his seventh season as Oklahoma’s head coach.

Lehigh and Oklahoma will meet for the 22nd time. The Mountain Hawks are 6-1-1 over the last eight duals after dropping 12 of the first 13 meetings in the series. Saturday’s dual will be the first between Lehigh and Oklahoma in Bethlehem since 2018 and the first at a “neutral” site since the 2010 Virginia Duals.

Saturday’s Lehigh-Oklahoma State dual begins at noon from Leeman-Turner Arena at Grace Hall. Tickets can be purchased at LehighTickets.com or by calling 610-7LU-GAME during business hours. Following the Oklahoma State match, Lehigh will make the short trek to Liberty High School to face Oklahoma at 3 pm The Oklahoma match will be streamed live on Rokfin with ticket information available at https://www.journeymenwrestling.com/tournaments .