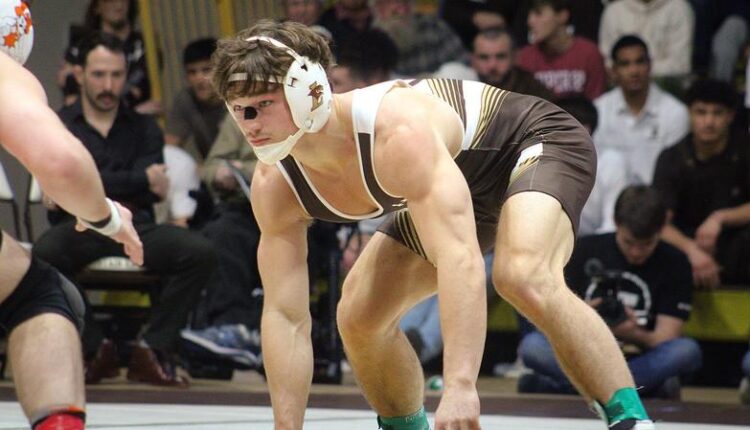 No. 13 Lehigh Falls at No. 17 Pitt as Panthers Rally in Upper Weights

PITTSBURGH – A second period pin by senior Josh Humphreys gave no. 13 Lehigh a 12-6 lead at the halfway point, but no. 17 Pitt won the final five bouts to claim a 22-12 victory over the Mountain Hawks Saturday night at Fitzgerald Field House. On a night in which Lehigh wrestlers defeated a pair of top 15-ranked opponents, Pitt had the upper hand in the upper weights to claim the victory.

The loss drops Lehigh to 3-2 on the season, while Pitt improves to 2-1.

The dual began at 125 with first-year Carter Bailey taking on Colton Camacho. Bailey trailed 3-0 after two periods and reversed in the third but could get no closer, as he dropped a 4-2 decision as the Panthers took an early lead.

Sophomore Connor McGonagle followed with a strong 5-3 decision over Pitt’s eighth-ranked Micky Phillippi at 133. After a scoreless first period, McGonagle rode out the second. He escaped early in the third and added a takedown to go up 3-0. Phillippi responded with an escape and takedown of his own, but after cutting McGonagle loose, could get no closer. McGonagle added the riding time point to deal Phillippi a dual loss to a Lehigh wrestler for the second straight year.

The lone TD for McGonagle in his win over No. 8 Phillippi!

True first-year Owen Reinsel stepped in for sophomore Malyke Hines at 141 and faced the tough task of taking on top-ranked Cole Matthews. Reinsel showed some skill on top, riding out the second period, but ultimately fell 8-2 as Pitt reclaimed a 6-3 advantage.

Sophomore Max Brignola returned to the lineup with a 7-6 decision over Tyler Badgett at 149. Brignola scored the first takedown and added reversals in the second and third periods plus a stalling point.

Humphreys recorded his first fall of the season, pinning 11th-ranked Dazjon Casto in 3:47. Casto scored the first takedown but Humphreys came back late in the first period with a takedown to take a 3-2 lead. In the second, Humphreys worked his way into a reversal and trapped Casto on his back, securing the fall to put Lehigh up 12-6 halfway.

Humphreys works his way into his first fall of the season!

Pitt’s comeback began at 165 as Holden Heller defeated junior Brian Meyer 6-0. Luca Augustine then tied the dual at 12-12 with an 11-6 decision over Jake Logan at 174.

The Panthers went in front for good following Reece Heller’s 7-6 win over graduate student Tate Samuelson at 184. Heller emerged on top from an upper body position for a takedown and two point near fall to lead 4-1 after one. Samuelson tried to erase a 5-1 deficit in the third with an escape and two takedowns, but it was a late escape by Heller that provided the deciding point.

A top 10 showdown at 197 also went the Panthers’ way as ninth-ranked Nino Bonaccorsi won a 10-4 decision over eighth-ranked sophomore Michael Beard. Bonaccorsi racked up four takedowns in the victory, including two in the second period, giving Pitt a six-point lead heading into the final bout.

At 285, first-year Nathan Taylor surrendered an early takedown and never recovered as Pitt’s Dayton Pitzer posted a 10-1 major decision to account for the final margin.

The Mountain Hawks will return to action on Sunday, Dec. 4 when they host top-ranked and defending national champion Penn State at Stabler Arena with match time set for 2 pm Tickets are still available and can be purchased at LehighTickets.com or by calling 610-7LU-GAME during business hours.

They were scholars and athletes. Good kids from good families. They were also addicts. – lehighvalleylive.com