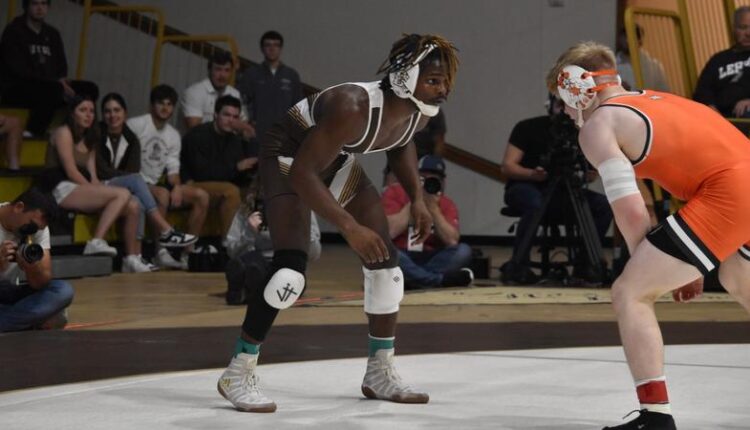 No. 13 Lehigh Faces First Road Test Saturday at No. 17 Pittsburgh

BETHLEHEM, Pa. – No. 13 Lehigh will leave the Lehigh Valley for the first time this season as the Mountain Hawks head to western Pennsylvania to battle No. 17 Pitt Saturday night at Fitzgerald Field House. The Panthers will be the third top 20-ranked opponent for Lehigh in his first five duals. Lehigh split a pair of duals against Oklahoma foes in two separate Bethlehem locations last weekend. The Mountain Hawks fell to No. 11 Oklahoma State 25-6 inside Leeman-Turner Arena at Grace Hall, but then came back to defeat Oklahoma 24-17 at Liberty High School as part of Journeymen WrangleMania. Lehigh posted bonus wins in the final three bouts to erase a 17-9 deficit. First-year heavyweight Nathan Taylor clinched the victory with a pin of 17th-ranked Josh Heindselman in the final bout of the dual.

Deferred first-year heavyweight Nathan Taylor delivered a second period pin against 17th-ranked Josh Heindselman to secure a 24-17 victory for No. 14 Lehigh against Oklahoma at the Journeymen WrangleMania at Liberty High School’s Memorial Gymnasium. The Mountain Hawks trailed 17-9 after seven bouts but Taylor’s fall capped a run of three straight bonus point wins to give Lehigh the come-from-behind victory. Graduate student Tate Samuelson (184) and sophomore Michael Beard (197) won by major decision and technical fall, respectively, to put Lehigh up 18-17 heading into the final bout. The win over the Sooners provided a bounce back for the Mountain Hawks, who fell to No. 11 Oklahoma State 25-6 earlier earlier in the day inside Leeman-Turner Arena at Grace Hall.

In addition to last week’s two duals, Lehigh had five wrestlers compete at the Journeymen Collegiate Classic, Nov. 13 at nearby Freedom High School in Bethlehem. Sophomore Luca Frinzi led the way, going 3-0 to win the 165C pool championship. Connor Herceg finished third at 165B, going 1-2. Also competing for the Mountain Hawks were Thayne Lawrence (2-1 at 174B), AJ Burkhart (0-2 at 184B) and Elijah Jones (1-1 at 285A).

Senior Josh Humphreys is the most accomplished of all the returning Mountain Hawks. In his first three seasons, Humphreys won a pair of EIWA titles at 157, qualified for the NCAA Championships on three occasions and in 2020 was recognized as a NWCA first team All-American. Humphreys went 20-5 last season with four falls and 12 bonus wins. He won the 2020 Coaches Trophy as the Outstanding Wrestler at the EIWA Championships. The Parkersburg, W.Va., native has opened his senior season with four victories, including a pair of bonus wins, running his career record to 64-18.

No. 17 Pittsburgh opens its home slate this weekend as the Panthers will wrestle Maryland Friday night before Lehigh visits on Saturday. Pitt opened his dual season with a 36-0 shutout win at Cleveland State last Friday. The Panthers were 8-6 in duals last season, finished third in the ACC and 24th at the NCAA Championships. Six Panthers appear in the latest InterMat rankings, led by senior Cole Matthews, who is ranked No. at 141. Matthews is one of three returning All-Americans for the Panthers, joining Micky Phillippi (133) and 2021 NCAA finalist Nino Bonaccorsi (285). Brothers Holden and Reece Heller have joined the Pitt program after the beginning of their college careers at Hofstra. Keith Gavin is in his sixth season as head coach at his alma mater.

Lehigh head coach Pat Santoro wrestled for the Panthers from 1985-1989, under the guidance of the late Rande Stottlemyer, who retired following the 2012-13 season. Pittsburgh’s only four-time All-American, Santoro amassed a 167-13 record in four seasons for the Panthers, and won national titles at 142 in 1988 and 1989. A three-time EWL Champion, Santoro is also the Panthers’ career leader with 43 falls and posted an incredible 97-3 record over his final two seasons. He was inducted into the Pitt Athletics Hall of Fame earlier this fall. Pittsburgh assistant coach Drew Headlee returned to his alma mater in 2014 after two seasons as Lehigh’s volunteer assistant coach. Sixth-year Panthers head coach Keith Gavin is also a Pitt graduate. After graduation, Gavin trained and competed in freestyle with the Lehigh Valley Athletic Club (now Lehigh Valley Wrestling Club) before moving on to coaching positions at Virginia and Oklahoma.

Pitt is Lehigh’s sixth oldest rival with Saturday’s dual marking the 67th meeting in a series that dates back to 1916. Lehigh leads the series 45-19-2. Lehigh’s win last year snapped a two-match Pitt winning streak in the series. Pat Santoro is 9-4 in duals against his alma mater.

Saturday’s dual begins at 7 pm from Fitzgerald Field House in Pittsburgh. The dual will be streamed on ACC Network Extra.

The Mountain Hawks will be off from competition Thanksgiving weekend and will return to action on Sunday, Dec. 4 when Lehigh welcomes top-ranked and defending national champion Penn State to Stabler Arena for the 110th edition of Lehigh’s most-contested dual series. Match time is set for 2 pm