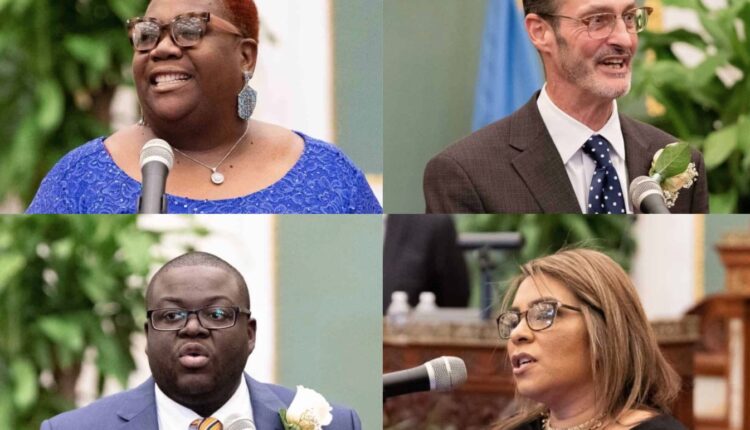 PHILADELPHIA — Philadelphia City Council recently welcomed four new members: Quetcy Lozada in District 7, Anthony Phillips in District 9, and Sharon Vaughn and Jim Harrity in at-large seats. The four Democrats replaced four long-time Councilmembers — Maria Quiñones Sánchez, Cherelle Parker, Allan Domb and Derek Green — all of whom announced their bids for mayor. The new Council members will serve out the remainder of the term, which concludes at the end of 2023.

Vaughn brings to her role 33 years of experience working for City Hall politicians, including former Councilmembers Augusta Clark, Marian Tasco and Derek Green. Her priorities as an incoming City Council member are tackling gun violence, making it easier for high school youth to join unions that will facilitate secure jobs, raising the minimum wage, and ensuring that Philadelphia residents have up-to-date, affordable housing.

When it comes to working for the LGBTQ+ community, Vaughn said, “I believe everyone deserves a fair chance at anything that they want to pursue in life. Prejudice is prejudice, whether it’s prejudice because of a person’s sexuality, because of a person’s color of skin, or who they choose to love. I believe that people that are LGBTQ should be allowed to live in society with the respect that we all deserve. I’m always going to fight for [people’s] rights no matter who you are, what you look like, or who you decide to call your soulmate.”

Vaughn expressed openness to listening to the needs of the LGBTQ community and helping to solve problems.

As the new councilmember for District 9, which runs along Philadelphia’s northern boundary from Stenton in Northwest Philadelphia to Lawndale in the lower Northeast, Phillips prioritizes public safety and plans to fight for working families while putting youth at the center of those efforts.

As a teenager, Phillips founded the nonprofit Youth Action, which provides middle and high school students with training, leadership mentoring, and funding to help educate them about community concerns. Phillips also works as director of pre-college programs for TeenSharp, where he helps students access college free of debt.

“For me, it is important that we keep all of our children safe, and in this particular case, LGBTQ youth,” Phillips said. “There are times in which people are attacked not just from an outside person coming in, but internally – children can be attacked through bullying, as well as through not being supported by faculty and staff. There’s not enough systems there. All young people deserve to be treated with love, with a level of respect, and most importantly, to receive the best quality of education in schools so that they can have opportunity.”

Phillips said he plans to listen to community members who are experts in particular areas to see where the needs are. When it comes to tackling LGBTQ issues, inclusivity is key for him. “Whether we’re doing a program or event, we have to use inclusive language,” Phillips said.

He added that LGBTQ issues should be front and center, and be considered in everything that we as a community do.

Harrity previously worked as an aid to state Sen. Sharif Street, and is political director for the Pa. Democratic Party. One of his main priorities is ameliorating the education system in Philadelphia in order to help mitigate gun violence.

“I believe that part of our problem in Philadelphia is that our education system is failing our children,” Harrity said. “And we’re seeing a direct correlation in that in the crime rates. We have almost 160 kids under the age of 16 killed in the city of Philadelphia, and most of them were killed by kids under the age of 16. I believe that part of our violence problem is [that kids] have no communication skills. They had two years of being shut in, and they don’t know how to talk to each other anymore.”

Harrity has a history of involvement in the LGBTQ community; he has helped try to get a Pride Resolution passed in the Pennsylvania General Assembly, and was in the room when Liberty City LGBTQ Democratic Club was formed.

“Everybody should be able to love who they want to love,” Harrity said. “People should have the same rights. I promise that I will also fight for their rights to love whoever they want.”

When asked how he plans to incorporate trans lives into his plan to reduce gun violence, Harrity said, “trans women, men, they are human beings; we’re all human beings. If somebody kills one of us, they should be prosecuted. It should be no different than them killing any other person on the street. It all goes back to this senseless hate that just keeps coming back around, and it just seems to find a new place to land.”

New District 7 Councilmember Lozada previously worked as an organizer for the nonprofit Esperanza, a faith-based organization that provides programming geared toward reducing poverty for residents of North Philly’s Hunting Park neighborhood. She served as chief of staff for Quiñones Sánchez for over a decade, before she took on a role as director of community engagement for the Philadelphia District Attorney’s Office.

Some of Lozada’s most important to-do list items, according to an interview with Billy Penn, include collaborating with the School District of Philadelphia to make sure school buildings are safe for students, working to establish affordable housing in District 7, which encompasses Kensington, and teaming up with police captains to devise solutions for cutting down crime.

Lozada’s team did not respond to the Philadelphia Gay News’ request for comment.

In Rural America, Deadly Costs of Opioids Outweigh the Dollars Tagged to Address Them