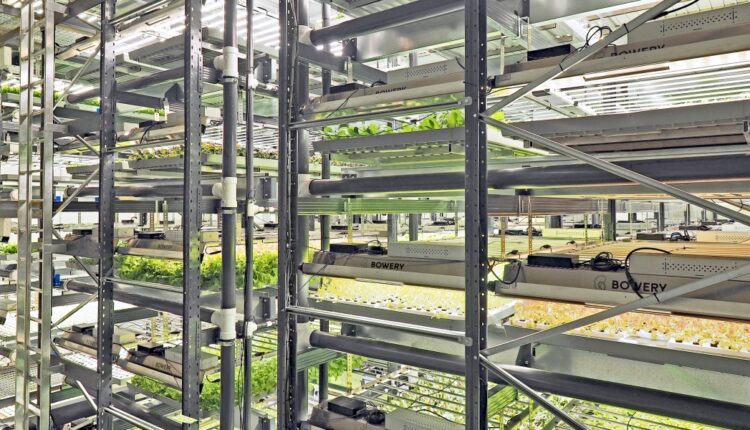 When startups aim for the consumer market, who better to help spread the word than popular celebrities aligned on the mission? Today’s tale of the war for you salad bowl includes actor Natalie Portman, singer and actor Justin Timberlake, and NBA all-star Chris Paul. Let me explain.

Agriculture is one of the oldest industries, but that doesn’t make it immune to innovation. On the contrary, we’re entering a phase where entrepreneurs are starting to succeed in applying advances in biotechnology, machine learning, and robotics to farming. The results could help not only feed a growing planet but reduce pollution, conserve water, and slow climate change. A McKinsey study from a couple of years ago projected savings of $100 billion from widespread use of precision agriculture methods.

One fast-growing field (ha, ha) is indoor farming. Hydroponics has been a thing for decades, but the newest efforts to grow crops under tightly controlled conditions are also harnessing connected sensors, big data, and AI to govern application of water and fertilizer. They are looking to use automation in harvesting, packaging, and shipping. And don’t sleep on blockchain—it can help improve supply chains and ensure freshness.

On Thursday, I chatted with one of the leaders in indoor farming, Bowery Farms CEO Irving Fain. He’s just raised $300 million in Series C funding at a $2.3 billion valuation as the startup looks to expand beyond its two completed warehouse-sized farms in New Jersey and Maryland. A third complex is already nearing completion in Bethlehem, Penn., and the new funding will let Bowery break out of the northeast and then go global, Fain says. He’s also hiring to add to the current workforce of over 400 people. Google and Samsung veteran Injong Rhee joined as chief technology officer in February.

In addition to prior investors like GV (formerly Google Ventures) and General Catalyst, the round was led by Fidelity, the Boston fund giant that had its own decade-long adventure backing an indoor tomato farm. Just below the list of your standard venture capital backers, however, Fain also got Portman, Timberlake, Paul and a few other celebs to invest, like race car driver Lewis Hamilton and chef José Andrés.

“Having folks like Natalie or Justin or Chris or Lewis helping to act as supporters for what we believe is important to the future of our food system at Bowery only helps to amplify the mission,” Fain says. “They are all very strong advocates of either plant-based eating or are vegan and really focused on the food system itself, making sure not only that it’s producing healthy food for people, but that it’s also producing it in a way that’s healthier for the planet.”

The big question remains whether smarter, less harmful agriculture methods will be economically viable going up against the traditional tactics of Big Ag. Fain and rivals like Evergreen Farms and Gotham Greens aren’t at the stage yet where they’re ready to disclose much about their finances to the public, or to a nosy reporter. And while Bowery is producing enough leafy greens and herbs like kale and basil to supply many hundreds of grocery stores (including Whole Foods and Stop & Shop), the company has yet to start selling other crops it has experimented with, from tomatoes and peppers to berries and potatoes.

Once it finally does, I’m expecting Natalie and Justin to whip up some pretty good smoothie recipes.

Everything from AI models to mobile apps can now be developed without a single line of code. The market potential is enormous—more than $80 billion in the next 10 years—so how can your company take advantage of these game-changing tools? Join fans and skeptics as we discuss what to consider as you implement this software and what it means to automate data science expertise with our panel discussion: Software Gets Simpler: Understanding the Low Code/No Code Movement. The online panel, Thursday, June 3, 2021 from 1:00-2:00 PM ET, includes C3 AI President and Chief Technology Officer Edward Abbo, ServiceNow CIO Chris Bedi, and Lightspeed Partner Anoushka Vaswani. Register here.

She came in through the PC window. As the annual Microsoft Build conference got started, CEO Satya Nadella did not announce the next generation of Windows. “Soon we will share one of the most significant updates to Windows of the past decade,” the CEO said. Isn’t the point of big annual conferences to focus the red hot media spotlight on your most important new products? Whatever. Meanwhile, yada yada there are updates coming for Office and Teams and all that. Microsoft also teamed up with Accenture, Goldman Sachsnonprofits like the Linux Foundation, and climate groups to figure out how to tweak cloud software to reduce emissions. That could mean, for example, running applications in data center locations or times when more renewable power is available.

Shaken not stirred. The rumors were true. Amazon announced on Wednesday morning that it will acquire Hollywood icon MGM Holdings for $8.5 billion including debt. The purchase gives Amazon a collection of movies to add to its Prime Video service, including the James Bond series (meh), the Legally Blonde series (yes!), and the overdue-for-a-sequel Thomas Crown Affair.

No use resisting my listing with your assisting and twisting. Another tech company is going public via a direct listing. Job search service ZipRecruiter will list on the New York Stock Exchange under the symbol “ZIP” today without issuing any new shares. The not-so-meaningful reference price of $18 per share values ​​ZipRecruiter at $2.4 billion. Hopefully the deal will go better than the debut on Tuesday of video sharing service vimeo. the I.A.C spinoff, trading under the symbol “VMEO,” in its first day as an independent company dropped 13% from its closing price Monday in when-issued trading.

The docbot will see you now. Now that electronic medical records are a thing, Google thinks it’s time to apply some AI and machine learning. The tech giant is partnering with hospital giant HCA Healthcare to analyze health data and develop applications to advise doctors, monitor patients, and lower costs. The Googleplex is also finally rolling out its mysterious new operating system called fuchsia. An update to the Nest Hub smart screen will shift the device’s underlying software from a variant of Linux to Fuchsia, though the switch isn’t supposed to change any functions from a user’s perspective.

Power to the dongle. That USB-C cable in your kit is getting an electrifying upgrade. The standards body that oversees the connector said an updated version 2.1 of its USB-C specification will include the option for the cables to carry 240 watts of power, up from a maximum of 100 watts now and enough to power 4K monitors, printers, and gaming laptops.

The Attorney General for the District of Columbia opened a new front in the antitrust wars against Big Tech this week, filing a lawsuit against Amazon over its pricing policies, as Robert noted in yesterday’s newsletter. Washington Post reporters Cat Zakrzewski and Rachel Lerman dig into the legal and political issues raised in the case, which ostensibly focuses on agreements Amazon struck with third party sellers not to offer lower prices for their products on any other web sites.

The complaint takes narrow aim at agreements that Amazon imposes on sellers on its marketplace, known as “most favored nation” clauses. Stacy Mitchell, co-director of the Institute for Local Self-Reliance and a top critic of Amazon, said the suit gets at the heart of one way that Amazon undermines competition, but that there are many others.

Mitchell said she hoped that other state attorneys general and the FTC were looking at other competition concerns related to Amazon, and she said Congress needs to pass legislation to address the company’s dominance. She said far more drastic action is needed.

“To have a truly competitive e-commerce market, you have to break up Amazon,” she said. “There’s a fundamental conflict of interest when you own the infrastructure and you also compete on that infrastructure.”

IN CASE YOU MISSED IT

A necessity during lockdown, meal kits will outlive COVID. Here’s why By Sophie Mellor

Bitcoin bargain hunters snatch up over $1.1 billion as prices dip By Chris Morris

(Some of these stories require a subscription to access. Thank you for supporting our journalism.)

There aren’t many better models of friendship and living a joyful life than Arnold Lobel’s Frog and Toad series of books (plus the wonderful musical version). Yesterday, one of my kids pointed out that there’s a clever Twitterbot that simply posts a short excerpt from the books every three hours. “’We are not afraid!’ screamed Frog and Toad at the same time,” it tweeted this morning. I’ve added it to my feed for an occasional reminder that life is good.