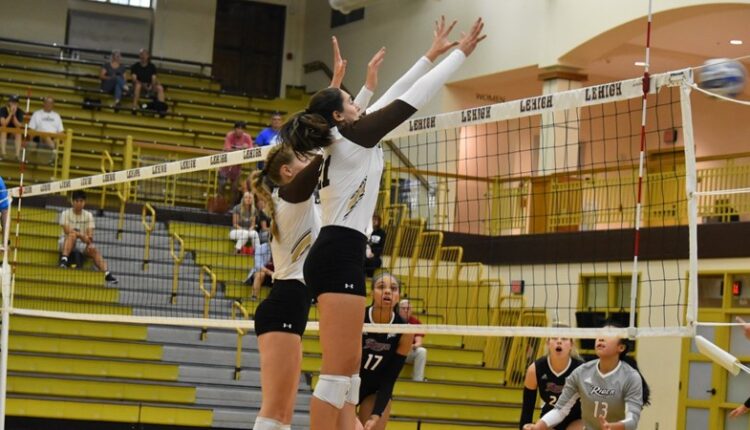 LEWISBURG, Pa. – In its second Patriot League match of the season, the Lehigh volleyball team struggled to find its rhythm as it fell to Bucknell 3-0 on Saturday afternoon. The Bison outhit the Mountain Hawks .282 to .137.

Lehigh’s second straight league loss drops the Mountain Hawks to 8-5 overall and 0-2 in the league while Bucknell improves to 8-2 overall with a win in its league opener.

In the first set, the Mountain Hawks and the Bison battled, with both teams going on runs throughout the first few points. Bucknell took a 19-15 lead before winning five consecutive points to extend his lead to 24-15.

Sophomore Makena Smith had a skill to get Lehigh its 16th point in the first set but the Bison secured the win off of a kill from Bri Frazilus.

During the second set, the Mountain Hawks showed no signs of letting the match get away from them. The two teams went back and forth with one another, tying and retaking leads throughout the entire set. Sophomore Megan Schulte had six of her ten kills during the second set alone.

The Bison opened up the third set on a 4-1 run but Lehigh would not give up. The Mountain Hawks were able to tie things at six all before Bucknell went on another run. Schulte was able to get Lehigh back in the set and help the team tie the score at 13-13 before the Bison scored seven straight to take the 20-13 lead. Bucknell closed out the set on a 4-0 run to take the 3-0 win over the Mountain Hawks.

Sarina Singer had 14 kills and a .545 hitting percentage to lead Bucknell.

Lehigh will travel to Philadelphia for its final non-league match of the season on Tuesday, Sept. 20. The Mountain Hawks will take on Penn at 7 pm before hosting two league matches in Bethlehem next weekend.

Holy Cross will come to town on Friday, Sept. 23 for a 7 pm matchup and Army will return to Grace Hall on Saturday, Sept. 24 at 4 pm Both matches will be streamed on ESPN+.

With Bannon’s latest legal troubles, it’s another Trumpster in the Dumpster | Opinion