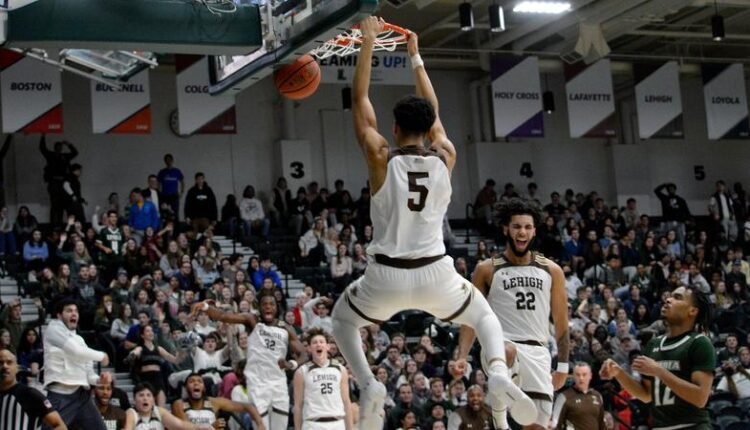 BALTIMORE – Sophomore Keith Higgins Jr. went 4-for-4 at the free throw line in the last 15 seconds to seal the win, lifting the Lehigh men’s basketball team to its fifth consecutive victory, defeating Loyola (Md.) 74-70 inside Reitz Arena on Monday night.

The Mountain Hawks (10-8, 5-2 PL) snapped a two-game losing skid to the Greyhounds to win their fifth game in a row while Loyola (7-13, 2-5 PL) suffers its first loss in over a week and fifth loss at home this year.

Loyola opened the contest with a basket and the Mountain Hawks countered with one of their own. This trend continued throughout the half as there were seven lead changes and four ties throughout the first 20 minutes of the game. Lehigh took a 10-9 lead but the Greyhounds followed that with a run of their own and led by as many as nine points, 26-17, with just over eight minutes to play. Trailing 28-23, senior Reed Fenton was fouled on a three-point attempt and was sent to the free-throw line, where he converted all three. On the next trip on offense, Fenton drew a foul and converted the shot to be sent to the line for an and-one, which tied the game at 28-28 with 4:39 left in the first. The Mountain Hawks closed out the half on an 8-4 run and possessed a three-point lead at the half, 35-32.

The second half started with a dunk from sophomore Tyler Whitney-Sidney, who drew the foul for a three-point play. Loyola cut the deficit to one point, 40-39, but the Brown and White continued to stay in front. Lehigh then had three consecutive highlight reel dunks from Whitney-Sidney, Higgins Jr., and senior Evan Taylor to put the Mountain Hawks ahead by seven points with 12:44 remaining.

Loyola went on a 9-0 run to regain the lead with 8:46 to play, but Whitney-Sidney answered with a three-pointer to put Lehigh back in front, 58-57 with under seven minutes in regulation. Whitney-Sidney converted a basket and drew a foul for a three-point play to put the Mountain Hawks ahead by four, 63-59. Lehigh led by eight points on two separate occasions, the last at 69-61, but Loyola continued to cut into the lead. The Greyhounds got within two points twice in the final minute, but Higgins Jr. sank four free throws in the final 15 seconds to ice Loyola and give the Mountain Hawks a 74-70 victory.

Higgins Jr. was one of three Mountain Hawks to finish in double-figures, leading the team with 27, just one shy of his career high, shooting 70 percent (7-for-10) from the field with three three-pointers and a perfect 10-for-10 from the free-throw line. He scored 14 first-half points and also added two rebounds and an assist. This is Higgins Jr.’s 13th game reaching double-digits and his third 20-point game of the season

Also reaching 20 points was Taylor, who recorded his first double-double of the season, scoring 20 points and bringing down 11 boards. He shot 46.7 percent (7-for-15) from the field and hit two three-pointers and 2-for-2 from the charity stripe. Taylor also contributed two assists and two blocked shots in his 16th game scoring at least 10 points and his sixth game scoring 20 or more points. Whitney-Sidney tossed in 18 points, reaching double-figures for the 12th time, shooting 63.6 percent (7-for-11) from the floor and finished with two rebounds, a steal and an assist.

Fenton finished with six points, two assists, a rebound and one steal while junior Dominic Parolin and sophomore Ben Knostman both added points for the Brown and White with Parolin scoring two points, two rebounds and two steals while Knostman had four boards, two assists and a blocked shot.

Lehigh committed 15 turnovers that Loyola turned into 16 points while the Greyhounds were forced into 13 miscues that the Mountain Hawks turned into 13 points. The Brown and White were out-rebounded 35-30 and was narrowly edged in points in the paint, 28-26.

The Mountain Hawks return home to take on Lafayette on Saturday, Jan 21 in The Rivalry presented by Lehigh Valley Orthopedic Institute. Tip-off is scheduled for 7 pm and the game will be broadcast on ESPN+ and Service Electric Network. Tickets can be purchased at LehighTickets.com or at Stabler Arena on Saturday before tip-off.