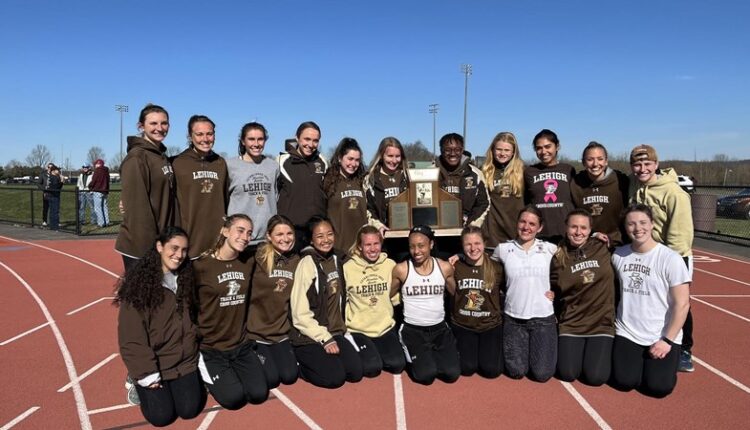 “I’m always happy to win and will not complain about today’s win,” said head coach Matt Utesch. “The team got off to a slow start today and this is the first year we’ve had the meet this early on the calendar and I saw the effects of it. I think we’re a better team than we showed today and I hope when the championships come around we have more intensity.”

Lehigh continued to find success on the track in Easton on Saturday, with 10 student-athletes finishing with PRs. In the sprints, the Mountain Hawks won four events and had six of the 10 student-athletes PR in their respective races. Sophomore Jordyn Hock continued to show improvement for Lehigh. Hock won the 400m with a new PR of 57.52. Senior Camari Griffin was close behind Hock, finishing second with a personal record of 1:00.04.

“Jordyn continues to impress me,” Utesch said. “She’s so strong and only going to get better. Melissa is doing exactly what we expect of her and we’re just really pleased to see what she’s been doing so far this season.”

In the 200m, first-year Cunningham made her outdoor Lehigh-Lafayette debut. She earned a new PR of 25.40 in her first place finish. Sophomore Ashley Struck and first-year Stephanie Webb followed Cunningham, finishing second and third with respective times of 26.07 and 26.35.

Cunningham continued to find success against the Leopards, grabbing a first-place finish in the 100m as well (12.33). Webb finished third (12.84) and Struck finished fourth (12.99) alongside Cunningham.

Graduate student Kaja Skerlj made her last Lehigh-Lafayette dual meet count, winning the 400m hurdles with a time of 1:06.06. In the 100m hurdles, junior Ashley Griesmeyer earned points for the Mountain Hawks, finishing second with a time of 15.43. Seniors Carly Carpino (15.55) and Chae Kim (15.72) were close behind, finishing third and fourth respectively.

Lehigh swept the 800m on Saturday, with seniors Hetty McMillan, Jade Sessions and Kara Bonner all earning new PRs. McMillan finished first with a time of 2:11.37. Sessions and Bonner finished second and third with respective times of 2:11.80 and 2:12.74.

“This group is having a killer year and they’re absolutely crushing it so far,” Utesch said. “They are a tremendous group of seniors that are feeding off of each other in the 800m. Then you see the younger girls in the 1500m following in the seniors’ footsteps and sweeping their event.”

On the distance side, sophomore Christina Yakaboski earned a new PR in her first-place finish against the Leopards. Yakaboski finished the 1500m with a time of 4:40.14. Juniors Elena Perez-Segnini and Annalize Davis finished second and third with respective times of 4:40.40 and 4:49.68.

“Throws had a great day today,” said Utesch. “Shot didn’t go how Teasha wanted but she’s the backbone of the group for both the women and men.”

In the jumps, Casey Talamini-Kelemen found success in her first outdoor dual meet against Lafayette. The first-year set a new school record in the triple jump with her first-place finish of 11.83m and placed third in the pole vault with another PR of 3.40m. Junior Nina Cialone followed close behind Talamini-Kelemen in the triple jump, finishing second with a PR of 11.58m.

“Casey just picks up right where she left off in indoors,” Utesch said. “She’s taking everything she learned indoors and applying it and having tremendous success.”

Lehigh went on to sweep both the high and long jump on Saturday. In the high jump, junior Calista Marzolino won with a jump of 1.62m. Sophomore Kerry Perna finished second with a mark of 1.57m and first-year Izabel Fronc finished third with a new PR of 1.52m. In the long jump, junior Avery Roze finished first with a mark of 5.19m. First-years Mauger and Modi finished second and third with respective marks of 5.17m and 5.12m.

“I just want to give a quick shout out to all of our alumni who came out and saw us today, specifically Joe McVeigh and Dave Thomson,” said Utesch. “Thank you all for your support!”

The Mountain Hawks will remain in Bethlehem next weekend to host the Lehigh Invitational on Saturday, April 9. The meet is scheduled to begin at 10 am at Goodman Track and Field Complex.

Ben Franklin Technology Partners to invest $252,500 in the regional economy