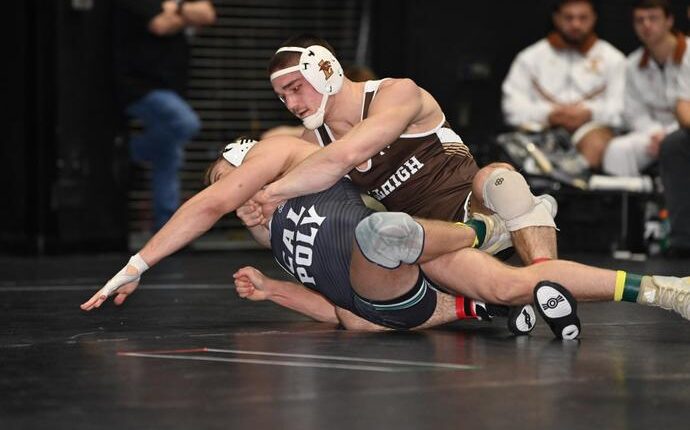 NEW ORLEANS-No. 19 Lehigh went 1-1 Monday against ranked foes at the Collegiate Wrestling Duals. The Mountain Hawks opened the event by winning eight bouts in a 26-6 victory over No. 25 Cal Poly, but then fell 24-10 to No. 7 NC States. Lehigh wants to wrestle No. 3 Ohio State Tuesday for third place in the Red Pool.

Sophomore Connor McGonagle (133) and senior Josh Humphreys (157) both went 2-0 on the day, leading the way for the Mountain Hawks, who are now 4-4 on the dual season.

Lehigh dropped the opening bout against Cal Poly but took control from there, winning seven straight bouts to take a 23-3 lead.

McGonagle put Lehigh on the board with a 3-0 decision over Ethan Rotondo, behind a second period rideout and third period reversal. Classmate Malyke Hines followed with the first of two bonus wins for the Mountain Hawks as he rode a first period takedown and four point near fall to a 9-1 major decision over Lawrence Saenz at 141.

Sophomore Manzona Bryant IV got the nod at 149 against Cal Poly and delivered an impressive 4-3 decision over 11th-ranked Dom Demas. Trailing 1-0 after two periods, Bryant reversed to open the third and later added a takedown to go ahead 4-2. Demas escaped to get back within a point and was in on a late attempt, but could not convert as Bryant picked up his first victory of the season.

Humphreys closed the first half of the dual with a 13-1 major decision over Luka Wick, which put Lehigh up 14-3 at the halfway point.

With junior Brian Meyer out of the lineup, sophomore Luca Frinzi stepped in at 165 and kept the momentum going for Lehigh, scoring a takedown late in the third period to defeat Legend Lamer 3-1. Sophomore Jake Logan followed with a 6-3 decision over Brawley Lamer at 174 as Logan scored takedowns in the first and third periods around a second period reversal.

Graduate student Tate Samuelson capped the seven-match run with a 3-1 decision over Adam Kemp in a battle of ranked wrestlers at 184. Samuelson scored the only takedown of the bout after countering a Kemp shot in the second period.

Cal Poly (2-3) picked up its second win of the dual at 197 as seventh-ranked Bernie Truax scored a takedown late in the third period to edge No. 4Michael Beard 3-2.

Lehigh mustered just three victories against No. 7 NC State (7-0) as the Wolfpack picked up their first-ever win over the brown and white in this, their 11th meeting.

Senior Jaret Lane made his season dual debut at 125 but dropped a 4-0 decision to Jarrett Trombley. McGonagle evened the dual at 3-3 with a 4-1 decision over Kai Orine, riding out the second period and adding an escape and takedown in the third, plus riding time.

Hines dropped an 8-3 decision to Ryan Jack at 141 and sophomore Max Brignola fell 2-0 to Jackson Arrington at 149.

In the first of two bouts matching top 10-ranked wrestlers, seventh-ranked Humphreys met No. 9 Ed Scott at 157. Scott started fast, with an early takedown and two point near fall to go up 4-0 and led 6-3 after one period, but Humphreys turned the tide, turning Scott for a four point near fall early in the second, and eventually rode out the period. Humphreys out-scored Scott 5-1 in the third period to claim a 12-7 decision, bringing Lehigh within 9-6.

Beard bounced back from the loss to Truax by posting an impressive 11-3 major decision over No. 9 Isaac Trumble at 197. Behind two takedowns and an early four point near fall Beard led 8-1 after one period and added a third period takedown plus riding time, while Trumble mustered just three escapes.

Taylor dropped a major decision to NC State’s Tyrie Houghton in the final bout of the dual.

Prior to Monday’s duals, Lehigh had not faced either Cal Poly or NC State since the 2004-05 season. Lehigh’s win over the Mustangs evens the all-time series at 4-4.

Tuesday’s Lehigh-Ohio State dual will begin at 4 pm ET/3 pm CT and will be streamed on Rokfin.

In Philly, other cities the ‘starter’ home is disappearing | Tuesday Morning Coffee