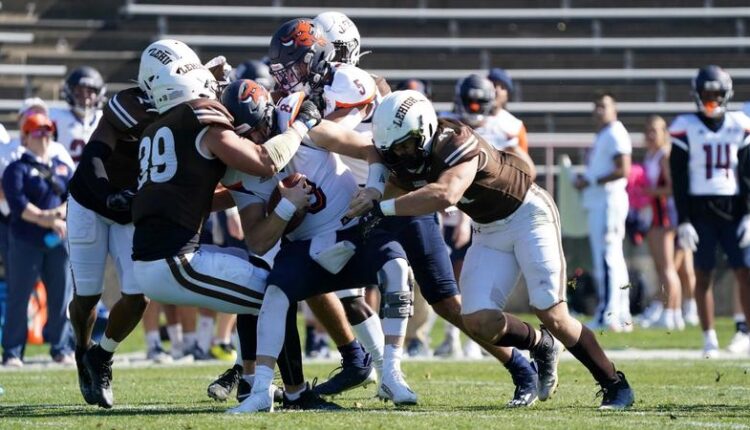 Mountain Hawks to Host Colgate on Salute to Service, Presented by Weis Markets

BETHLEHEM, Pa. – Lehigh takes the field at Goodman Stadium for the final time in 2022 as the Mountain Hawks host Colgate on Salute to Service Day, presented by Weis Markets. The Mountain Hawks will be looking to send their 18 seniors off with a victory in their final home game and build momentum heading into Rivalry 158 next week at Lafayette. Junior Dante Perri threw a pair of touchdown passes as Lehigh trailed Holy Cross by just 21-14 early in the third quarter, but the Crusaders closed the game with 21 unanswered points to claim a 42-14 victory last Saturday at Fitton Field. The Mountain Hawks allowed a season-low 132 passing yards, but gave up 338 on the ground. Lehigh was also held without a quarterback sack for the first time this season. Colgate fell 21-16 at home to Lafayette, a loss which snapped a two-game Raider winning streak.

As part of Salute to Service, all active and retired military members and first responders may claim a complimentary ticket to the game.

Last month, junior linebacker Mike DeNucci was added to the watch list for the Buck Buchanan Award, given to the top defensive player in the FCS. DeNucci has been a force for the Mountain Hawks in his first full season as a starter as he leads Lehigh with 76 tackles, 15 tackles for loss and eight sacks. He was named Patriot League Defensive Player of the Week on Sept. 27 after posting a game-high 11 tackles and a career-best three sacks for the Mountain Hawks at Princeton. DeNucci has 56 tackles and seven sacks over Lehigh’s last six games. He ranks in the top 10 in the FCS in solo tackles, tackles for loss and sacks.

Lehigh’s defense has shown marked improvement against the pass over the last three weeks. The Mountain Hawks allowed 339 yards per game through the air over their first six games, but over their last three have allowed an average of just 160. Lehigh allowed a season-low 132 passing yards at Holy Cross and sophomore Logan Jones came up with the Mountain Hawks’ first interception in four games. Last year, the Mountain Hawks held nine of their 11 opponents under 250 passing yards, but in 2022 Lehigh’s defense has only been able to do that over the last three games. Lehigh has five interceptions in nine games, matching its total from the 2021 season.

First-year wide receiver Geoffrey Jamiel leads the Mountain Hawks in receiving with 42 catches for 479 yards. Jamiel got into the end zone for the first time last week at Holy Cross as he took a screen pass 39 yards for a touchdown to bring Lehigh within 21-14 early in the third quarter. He established a new career-high with 88 receiving yards at Holy Cross on the heels of a career-best nine receptions against Bucknell. Jamiel captured a pair of Patriot League Rookie of the Week awards earlier this season and has caught at least three passes in each of Lehigh’s nine games.

With the 158th edition of college football’s most-played rivalry on the horizon, Lehigh will look to continue its run of success in the game prior to the Lafayette game. The Mountain Hawks have won 14 of their last 19 games the week prior to the Rivalry, with last year’s win over Georgetown snapping a two-year losing streak. During that span, Lehigh is 2-3 versus Colgate the week before the Rivalry, with wins in 2013 and 2014 and losses in 2012, 2015 and 2018.

Colgate brings a 3-6 overall record and 2-2 league mark into Saturday’s matchup. The Raiders saw their two-game league winning streak come to an end with a 21-16 loss to Lafayette in their home finale last weekend. Colgate was held to 249 yards of offense, lost a pair of fumbles and had a punt blocked in the loss. The Raiders are led by dual threat quarterback Michael Brescia, who has thrown for 1,077 yards and three touchdowns, while leading the team with 622 rushing yards and 11 rushing touchdowns. Defensively, Colgate allows 389.2 yards per game. Tyler Flick is the top tackler with 75 stops and 7.5 tackles for loss. The Raiders are minus-4 on the season in turnover margin.

Lehigh meets Colgate for the 60th time with the Raiders holding a 31-26 lead. There have also been two ties. Lehigh won six of the last 10 meetings, but Colgate’s wins in 2012 and 2015 clinched Patriot League titles for the Raiders. Tom Gilmore is 5-10 versus Colgate as a head coach, including 1-1 at Lehigh. Colgate is visiting Goodman Stadium for the first time since 2018.

The Mountain Hawks will close out the 2022 season next Saturday when they travel to Lafayette for the 158th edition of college football’s most-played rivalry. Lehigh won Rivalry 157 17-10 last year at Goodman Stadium and will be looking to win back-to-back rivalry games for the first time since winning four straight from 2015-2018. Game time is set for 12:30 pm from Fisher Stadium in Easton.