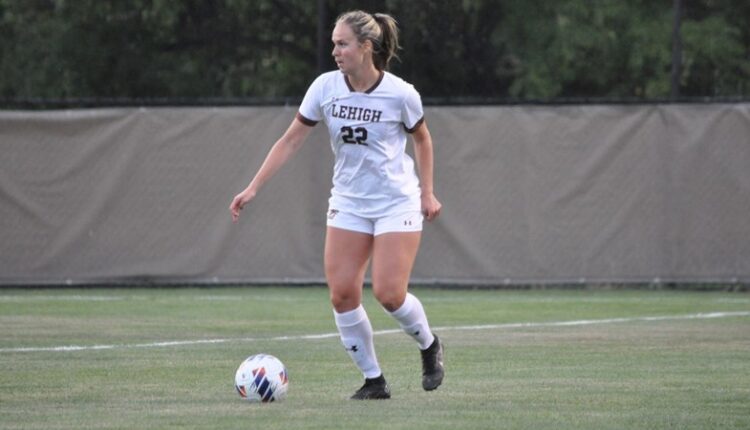 BETHLEHEM, Pa. – The Lehigh women’s soccer team will wrap up its three game road swing on Thursday before returning to Bethlehem on Sunday. The Mountain Hawks will travel to Siena on Thursday for a 4 pm matchup in Loudonville, NY and will return to the Ulrich Sports Complex on Sunday to host St. John’s. Opening kickoff is scheduled for 1 pm Both games this weekend will be streamed on ESPN+.

The Blue Hens scored a goal in the 12th minute to secure the 1-0 lead. Lehigh showed no signs of backing down and entered the second half with an offensive surge. Just six minutes into the second half, senior Julianna Bonner, who was named Patriot League Midfielder of the Week, evened the score at one with her first goal of the year.

Delaware responded with a goal in the 80th minute to take the 2-1 lead but the Mountain Hawks were not giving up. Senior Mattie Murphy laid the ball perfectly into the six-yard box leading to a header from Corinne Lyght to tie the game 2 -2.

Lehigh traveled to Philadelphia last Sunday for its second road game of the week. The Quakers opened up the game with a goal in the eighth minute but the Mountain Hawks responded with a goal of their own just nine minutes later.

Murphy found the back of the net off of a shot from outside the 18-yard box to tie the game 1-1. Penn scored a second goal in the 32nd minute to ultimately secure his 2-1 victory over Lehigh. First-year goalkeeper Maggie Ousouljoglou tallied a career-high seven saves against the Quakers.

Siena is 0-4-2 heading into Thursday’s contest. The Saints opened up the season with a 2-0 loss against Central Connecticut State but have earned draws against Holy Cross and Sacred Heart. Annie Bagnall leads Siena with two goals this season while goalkeeper Angela Fini has eight saves for the Saints.

Thursday marks the second meeting between Lehigh and Siena. The Mountain Hawks hosted the Saints last season at Ulrich Sports Complex where they picked up the 2-1 victory.

St. John’s is currently 3-1-2 on the season. The Red Storm opened the season with a 2-1 victory over Saint Joseph’s and recently defeated Central Connecticut State 3-0. Jessica Garziano leads St. John’s with two goals and three assists and goalkeeper Gina Muzi has 14 saves for the Red Storm.

Lehigh will look for his second victory over St. John’s on Sunday afternoon. The last meeting between the two teams resulted in a 4-0 victory for St. John’s in Queens, NY

Following this weekend, the Mountain Hawks will open up league play on Friday, Sept. 16. Lehigh will travel to West Point, NY for a 6 pm matchup against the Black Knights. The Mountain Hawks will return home on Wednesday, Sept. 21 to host Lafayette in the Rivalry presented by Lehigh Valley Orthopedic Institute. Opening kickoff is set for 6 pm and will be streamed on ESPN+.

America is in the middle of a labor mobilization moment