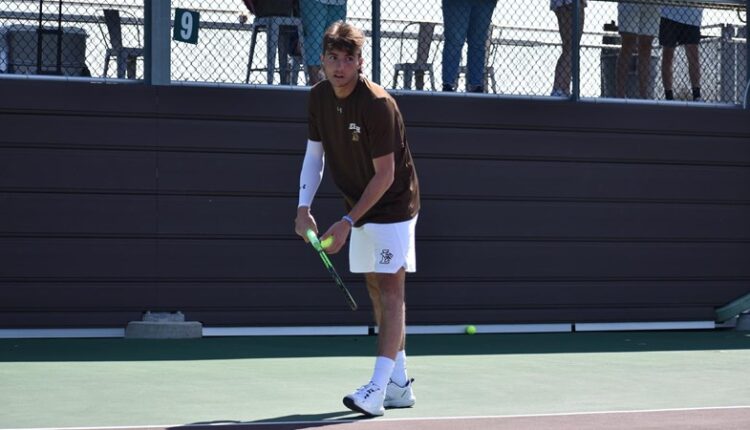 BETHLEHEM, Pa. – The Lehigh men’s tennis team will look to continue their historic season in Annapolis, Md. this weekend at the Patriot League Championships, hosted by Navy. For the first time since 2013, the Mountain Hawks will serve as the No. 2 seeds in this year’s championship. Lehigh will battle No. 7 Loyola Maryland on Friday at 3:15 pm

Seniors Zack Elliott and Gary Fishkin and junior Matt Kleiman lead the team in singles wins this season. Elliott has earned 12 wins at the No. 1 spot this season and is currently undefeated in the Patriot League. Fishkin and Kleiman both have 12 wins as well, with respective league records of 5-2 and 6-1.

Junior Jeremy Learner is another Mountain Hawk who is undefeated during league play. Learner, who is currently 3-0 in singles, has been clutch for Lehigh throughout the season. The junior clinched the Mountain Hawks’ first win over Army in over ten years on April 15.

First-year Marc Blekhman and junior Michael Bukhalo will likely be included in Lehigh’s lineup during the Patriot League Championships. Bukhalo finished league play with a 6-1 record in singles while Blekhman finished with a 4-1 record.

The Greyhounds finished the regular season with an overall record of 8-8 and a 2-4 record in the Patriot League play. Lehigh defeated Loyola in the first league match of the season, 6-1 in Baltimore on March 19.

Lehigh will look to claim its second Patriot League Championship in program history. The Mountain Hawks defeated Navy 4-0 in 2013 to win their first championship.

The Patriot League Championships will begin on Thursday at 1 pm with No. 8 Holy Cross and No. 9 Lafayette battling in the first round.

Semifinal matches will be played on Saturday, April 30 at 10 am and 2 pm The championship match is scheduled for Sunday, May 1 at 1 pm