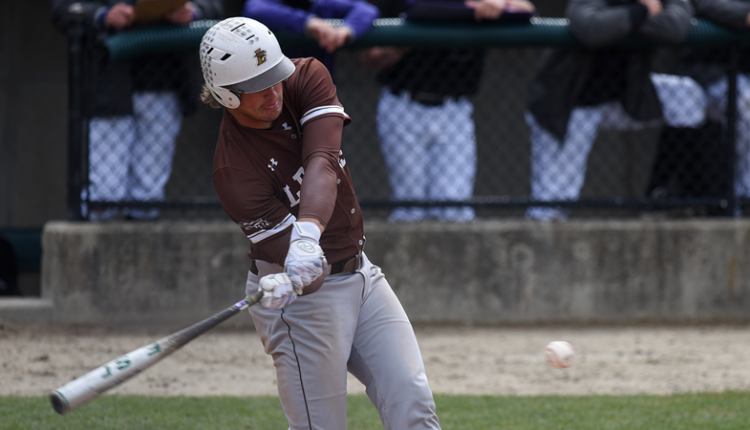 COLONIAL HEIGHTS, Va. – Mount St. Mary’s claimed the first of two games Sunday afternoon via walk-off fashion, 5-4 in extra innings, but the Lehigh baseball team capped off a 3-1 weekend with a 5-1 victory in the second game at Shepherd Stadium. The Mountain Hawks (4-3) had a great offensive effort in both games and were led by senior first baseman Casey Rother, who hit .571 (4-for-7) between the two contests with two doubles, two RBIs and two runs scored with a walk. Rother also displayed his dominance on the mound, pitching the final inning of Lehigh’s win in Game 2, earning his first career save.

With junior right-hander Carlos Torres pitching for Lehigh in the first game Sunday, Mount St. Mary’s started things off with a three-run home run to left center field to take a 3-0 lead.

In the top of the third, the Mountain Hawks scored two of their first three runs when Rother singled to left field and advanced to second on the throw while scoring both Tyler Young and Riley Davis. Andrew Nole singled to right field after that, scoring Rother to tie the game at 3-3. Lehigh took a 4-3 lead in the top of the sixth via an RBI single from Davis to left field, which Andrew Kohl scored. The Mountaineers tied the game at 4 in the bottom of the seventh inning via an RBI double down the left field line to force extra innings.

Coming over from playing third base, first year Rafe Perich relieved Will Grisack on the mound and with two outs in the ninth inning, got the batter to pop up, but Young dropped the ball and the runner scored from third to lift Mount St. Mary’s to win.

Grisack was charged with the loss after going 2.2 innings, allowing one earned run on three hits with two strikeouts and three walks. Torres was not factored into the decision despite throwing six strong innings, giving up three runs on four hits with eight strikeouts and only one walk.

Lehigh started Game 2 with a two-run first inning after Adam Retzbach singled to right field to bring home Perich to take a 1-0 lead. Justin Butler singled to center field as the very next batter, scoring Rother to push the Mountain Hawks ahead, 2-0.

Perich gave the Mountain Hawks a 3-0 lead in the second inning after registering his first career home run, a two-run shot that brought in fellow first year Jake Whitlinger.

Scoring was quiet for the next four innings after a strong starting outing from junior right-hander Ben Christian, in which he went 5.1 innings, allowing just one run on three hits with two strikeouts.

After Val Taddei came into the game in relief of Christian with two runners on, the Mountaineers tallied their first run of the game on a wild pitch, cutting the Lehigh lead to 4-1.

In the top of the seventh, the Mountain Hawks got an insurance run from Justin Butler, who singled to center field to score Perich to make it a 5-1 game.

That’s when Rother came in to pitch the final inning of relief, striking out one and walking one to earn the save as Lehigh salvaged the final game of the series and the afternoon.

Lehigh will take on Delaware State for three games next weekend in Dover, kicking off the series Friday at 3 pm