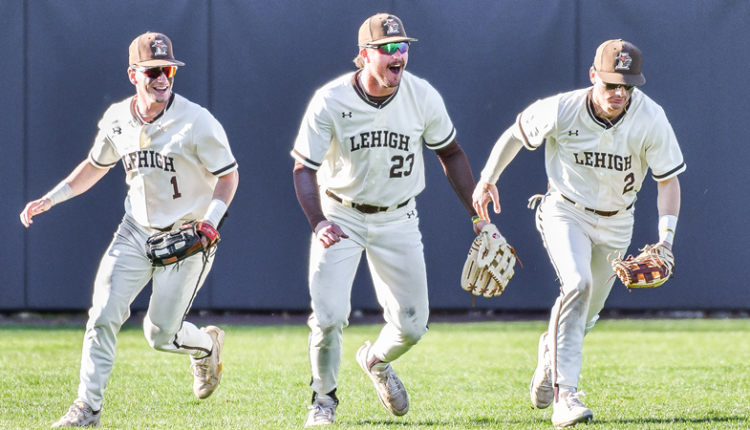 BETHLEHEM, Pa. – The Rivalry presented by Lehigh Valley Orthopedic Institute returns to South Mountain Wednesday afternoon as the Lehigh baseball team hosts Lafayette at J. David Walker Field at Legacy Park. After dropping three out of four games to the Leopards (12-26, 7-7 PL) in Easton to kick off Patriot League play, the Mountain Hawks (17-18, 5-9 PL) are looking to take the final game of the season series.

Lehigh won an extra-inning thriller Saturday at Navy, 13-12 but dropped the final two games of the series to the Midshipmen. The Mountain Hawks totaled three home runs and 16 hits in the Game 1 victory and was capped off by Adam Retzbach’s solo homer in the top of the ninth inning which proved to be the game-winning score.

Both Retzbach and senior Casey Rother had pretty impressive offensive weekends at the plate as Retzbach batted .357 with five hits, two home runs and a double with five RBIs and four runs scored. He slugged .857 and reached base at a .438 clip. His second homer of the week occurred to kick off Game 2, a three-run shot that allowed him to take over the lead on the team and Patriot League for home runs with eight. Rother hit .538 (7-for-13) with a homer, two doubles, three RBIs and four runs scored. He slugged .923 with one walk and one hit-by-pitch and an on-base percentage of .563. Both players finished a triple shy of the cycle in the first game.

Sophomore Tyler Young also had a productive weekend offensively, batting .462 with six base hits, three of which were for extra bases with two doubles and a triple with four RBIs. First-year Jake Whitlinger and senior Joe Gorla both had four hits on the weekend.

On the mound, junior Ben Christian had the pitching performance of the weekend, throwing six strong innings with just two runs allowed, keeping Lehigh in the contest throughout. He struck out three batters and scattered eight hits in his outing. Rother threw 3.1 shutout innings spread over two appearances and earning the victory in Game 1. He struck out three batters with three hits allowed and held hitters to an average of .231.

Despite missing his last five games due to injury, sophomore Riley Davis remains the Mountain Hawks’ top hitter, batting .354 with a .965 OPS in 30 games. However, Rother has emerged as the ‘guy’ late, just like he did last season. Rother is batting .333 overall with 47 hits, but in Patriot League play, the reigning Player of the Year is hitting .435 (10-for-23) with three doubles and a home run over his last six games against Army and Navy.

Lafayette dropped two out of three games to Army West Point its last time out over the weekend, most recently falling 15-6 to the Black Knights at Kamine Stadium.

As it stands, Lafayette currently holds down third place in the Patriot League standings, while Lehigh is in fifth behind Navy.

Two Leopards are hitting above .300 this year with Justin Grech (.306) and Pete Ciuffreda (.304) leading the way. First-year Blaze Fadio has erupted for the Leopards’ offense from a power standpoint since coming back late, with a team-high six home runs and a slugging percentage of .633.

On the mound, Luke Benneche (2-2, 3.62 ERA) leads the way, while Jordan Yoder (3-4, 6.49) and Jake Bloss (3-1, 6.69) have split most of the starting duties this year. Yoder, who pitched just an inning of relief over the weekend and has not started since Apr. 10 at Bucknell, could possibly get the start in Bethlehem on Wednesday.

Wednesday’s game will be streamed live on ESPN+ (subscription required) with Sam Kuperman on the call.