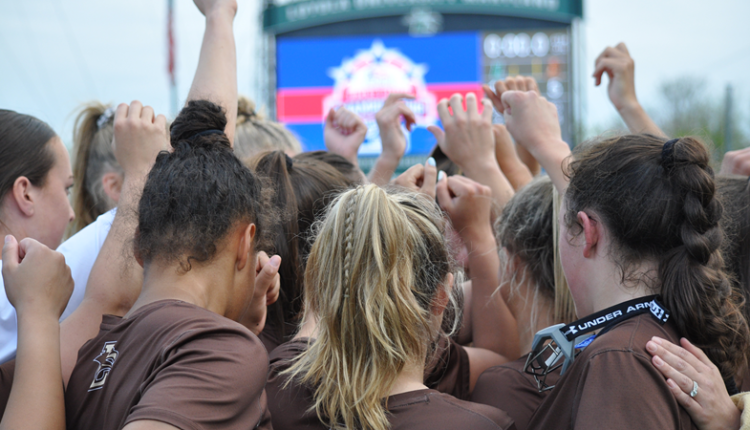 BALTIMORE, Md. — Top-seeded and seventh nationally-ranked Loyola jumped out to a big lead, scoring the game’s first 12 goals on its way to a 19-5 win over the fifth-seeded Lehigh women’s lacrosse team in the Patriot League Semifinals on Thursday afternoon. Sophomore goalkeeper Hayley Hunt made 11 first-half saves in an impressive effort facing the nation’s top shooting team.

Loyola scored the first four second-half goals before Garden found Eberhardt in transition at 2:43 of the third quarter.

Emma Eberhardt with the goal AND Jenna Garden with the assist! Fourth quarter starting now.

— Lehigh W Lacrosse (@LehighWLacrosse) May 5, 2022 The fourth quarter was highlighted by a three-goal Lehigh surge, with goals from Schneider (free position), Eberhardt (another highlight-reel behind-the-back goal) and Giordano ( from Eberhardt).

— Lehigh W Lacrosse (@LehighWLacrosse) May 5, 2022 Final shots were 38-13 in favor of Loyola while the Greyhounds held an 18-9 edge in groundballs and 20-7 advantage in draw controls. Hunt finished with 12 saves, with senior Kerry McHugh entering in the fourth and making two stops.

Hayley Hunt is on 🔥

She’s up to 10 saves with eight minutes left in the first half.
Watch on ESPN+ https://t.co/pKzi24ZaaM pic.twitter.com/fSK90LmHyX

— Lehigh W Lacrosse (@LehighWLacrosse) May 5, 2022 The 2022 season ends with the Mountain Hawks in the Patriot League Tournament for an eighth straight season, reaching the semifinals for the fifth time in the last six tournaments.