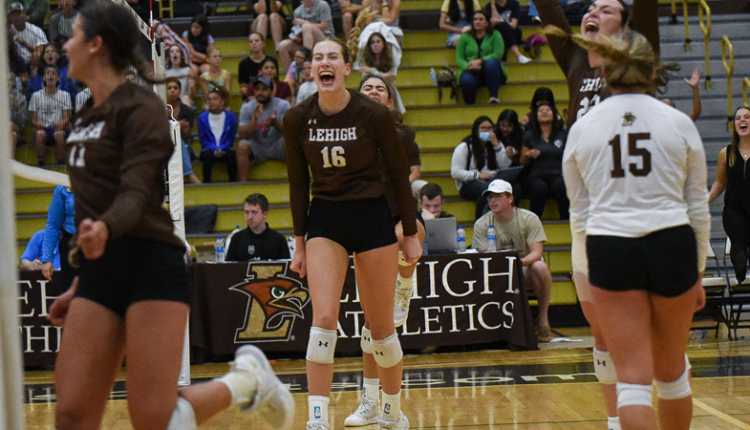 While sophomore Emily Stewart was exceptional in both contests on the day, it was truly a team effort in the finale, as four Mountain Hawks registered double-figures in kills led by first-year Natalie Luscomb with 15, 14 for sophomore Megan Schulte, 12 for junior Katarina Kaburov and 10 for Stewart, who also totaled seven block assists.

“It was definitely a long day, a lot of points played, a lot of sets,” said head coach Alexa Keckler. “I’m just really excited with the way we battled back and came out in that second match against Buffalo prepared and were much more disciplined. It was a fun one, both matches featured great teams with a lot of opportunity for our girls to grow , which is what we wanted, as much as we were disappointed in the outcome of that first match against Cleveland State.”

Against Cleveland State in the opener, the Mountain Hawks looked to have the contest in hand after winning the first two sets by scores of 25-17. However, the Vikings mounted an intense comeback with three straight sets to win out and get the victory.

Cleveland State had an exceptional run in the fifth set, totaling 10 kills with zero errors with a .625 attack percentage to boot. Lehigh hit .154 for the match with a .367 mark in the second set, led by a match-high 16 kills.

Schulte paced the Mountain Hawks with 14 kills and 13 digs and a .186 attack percentage. Stewart finished with 12 kills, six block assists and three digs, committing just a single error while hitting .524.

Makena Smith finished with 39 assists, while Kyleigh Brown had 15 digs.

“Emily has been playing fantastic for us so far,” said Keckler. “Cleveland State did an excellent job of getting us out of system, served us a lot tougher and created more difficult in us getting her the ball. She’s pretty terminal when she does get the ball in her hands, so that made a big impact in our offense.”

The Vikings were led by Laken Voss’ 15 kills, while Karly Klaer had 25 assists, eight kills and 14 digs.

Moving over to the nightcap, the first set was littered with top plays as the Bulls bested the Mountain Hawks, 28-26. Despite Buffalo’s 16 kills to Lehigh’s 10 in that set, the Mountain Hawks hung in there throughout the set, falling by only two.

— Lehigh Volleyball (@LehighVBall) September 3, 2022 Boosted by a commanding 17-8 lead in the second set, the Mountain Hawks fended off a late Buffalo charge to win the final three points and take it, 25-16 to tie the match at 1-1.

With a 22-19 lead in the third set, Lehigh fell victim to Buffalo’s five consecutive points to take a 24-22 set point, but the Mountain Hawks fought tooth and nail to send it to extra time, eventually coming out on top, 32 -30 following a kill from Luscomb and a block from Luscomb and Stewart.

The Mountain Hawks hit .316 in the fourth set with just two errors as a squad to take it, 25-23 and come on out with the match victory.

In addition to the four players with double-digit kills, the Mountain Hawks were led by Makena Smith’s 46 assists and Kyleigh Brown’s 23 digs.

“Our team has been playing competitive volleyball from the beginning of the season,” Keckler said. “We’ve really been pushing points and executing our game plans. I think in our final three sets against Cleveland State, we reverted back to our old ways. The girls knew they were capable of playing this way, so going into the Buffalo match , I was super proud of the way they fought and battled.”

Lehigh closes play at the Steel Classic on Saturday against Rider at 3 pm The match will be streamed live on ESPN+.

The MAGA threat isn’t just in Washington. We’re facing it in Pa., too | Opinion