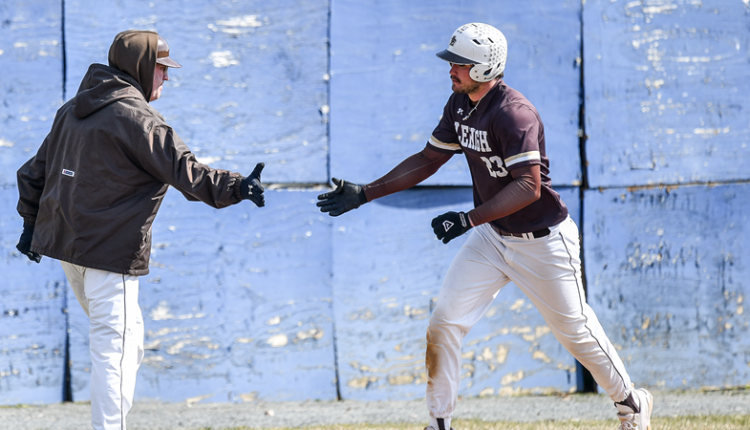 BETHLEHEM, Pa. – After getting an important Patriot League victory over Lafayette Wednesday afternoon at home, the Lehigh baseball team goes back on the road this weekend, taking on Bucknell for three games at DePew Field in Lewisburg. The Mountain Hawks (18-18, 6-9 PL) play the Bison (16-19, 12-7 PL) twice on Saturday beginning at noon and once Sunday at 1 pm Sunday’s contest will be streamed live on ESPN+ (subscription required) .

Currently in fifth place in the standings and just a game behind Lafayette to get into the Patriot League Tournament, every game from here on out matters for Lehigh, looking to qualify for the PLT for the second consecutive season.

The season series with Bucknell wraps up this weekend, after the team’s split the first two games back at Walker Field in early April.

Lehigh’s bats took off against the Leopards on Wednesday with five players accumulating two hits at the plate, led by another impressive performance from sophomore Riley Davis, who returned to the lineup following an injury a couple weeks ago. Davis increased his reached base streak to 26 straight games after going 2-for-4 with a double, a run scored and an RBI. Davis continues to lead the Mountain Hawks at the plate this season with a team-best batting average of .359.

Casey Rother, Gerard Sweeney, Tyler Young and Andrew Nole also all had two hits for Lehigh in the victory.

On the mound, right-hander Carlos Torres (2-1, 8.63 ERA) was excellent in his start, throwing 5.1 innings and allowing just one run on four hits with five strikeouts en route to his second win of the year. Nick Pave (1-1, 6.93) shuts the door in two frames to earn the save, his fourth of the season.

Senior left-hander Luke Rettig (6-2, 1.84) hopes to get back on track against the Bison on Saturday after two consecutive rough starts against Navy and Army West Point. He has not faced Bucknell yet this season after throwing against the Mids on Apr. 2. Senior lefty Matt Stamford (3-4, 6.00) and junior righty Ben Christian (2-3, 4.54) have both pitched well in the starting rotation as of late.

Bucknell got an 11-1 victory at Navy in its mid-week matchup on Wednesday, following an 8-0 win over Holy Cross on Sunday, out-scoring teams, 19-1 in its last two games. The Bison ultimately dropped the three-game weekends series to the Crusaders and currently are second in the standings behind Army.

On the mound, Will Greer (5-1, 2.67 ERA) remains a candidate for Patriot League Pitcher of the Year and has been electric this season for the Bison. Mountain Hawk hitters will be facing Greer for the first time this year. Jacob Terdlinger (1-0, 4.05) and Tyler O’Neill (1-3, 4.15) have also been strong arms for the Bucknell pitching staff.

Only Sunday’s contest will be streamed live on ESPN+ (subscription required). Saturday’s games will have live stats provided.

What we know about Philly Pride 2022. Your questions answered