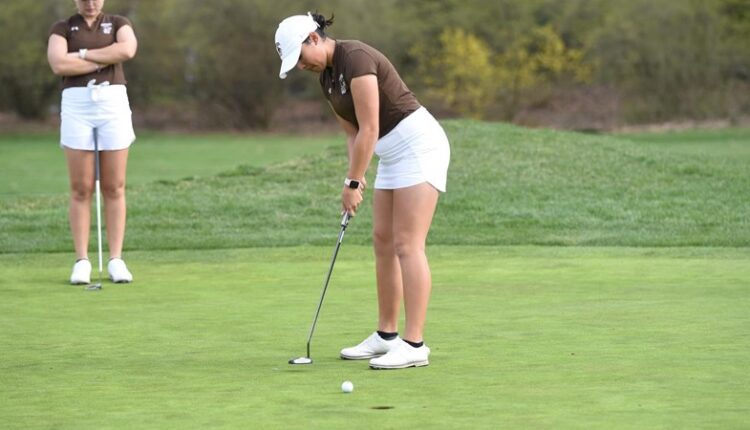 ANNAPOLIS, Md. – The 2022 Patriot League Championship could not have started much better for the Lehigh women’s golf team. Four Mountain Hawks shot in the 70s, led by a 73 by first-year Madison Pineda as Lehigh finished at 304 Friday at the Naval Academy Golf Club. Lehigh leads the six-team field by two strokes over host and defending champion Navy. Pineda leads the individual standings by one stroke over Vicky Zhu of Richmond.

Pineda owns top 10 finishes in six of eight tournaments this season, including all four previous fall events. She began her first league championship with the round of one over par 73. Pineda made one bogey in her first nine holes to shoot 37 and then was even on the back nine with two birdies and two bogeys.

All three Lehigh sophomores competing shot in the 70s Friday to help the Mountain Hawks to the lead. Sophie Holland had a hot start, shooting 35 on the front nine with three birdies. Only trouble on the 18th hole kept Holland from matching Pineda as Holland shot 76 and is tied for fourth place.

Sophia Taverna is the third Lehigh player in the top 10. She made two birdies on the back nine and is tied for seventh place after shooting 77.

Meghna Grover also made two birdies, with both of hers coming on the first nine. She shot 78 and is tied for 11th place.

Junior Hannah Foster shot 82 Friday and is tied for 19th place, while classmate Iris Shin sits in 36th following a 95 that included one birdie.

The Patriot League Championship continues Saturday with the second round, beginning at 8:30 am Lehigh will play with Navy and Richmond beginning at 9:30 am

As more people travel out of state, abortion funds may not keep pace with demand | Opinion