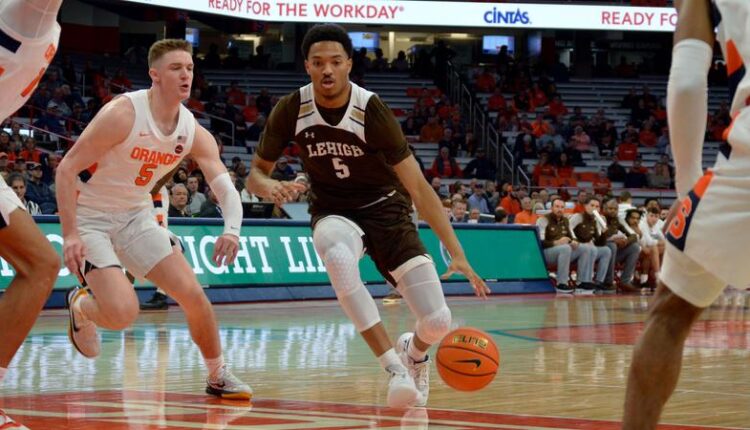 SYRACUSE, NY – After possessing a five-point advantage early in the first half, the Lehigh men’s basketball team suffered a 90-72 loss to Syracuse inside the JMA Wireless Dome on Monday evening. The Mountain Hawks open the year with a 0-1 record as the Orange are now 1-0.

Lehigh got on the board first when junior Dominic Parolin sank a jumper to give the Mountain Hawks the 2-0 lead. Syracuse countered with a layup to even the game at 2-2. Senior Evan Taylor made a three-pointer to put Lehigh back in front as sophomore Tyler Whitney-Sidney hit a pair of free throws and another gymnast basket put the Mountain Hawks in front, 9-4.

Syracuse tied things up after Parolin got called for two quick fouls. Alumundun regained the lead for Lehigh on a fast break layup, which led to a transition dunk from Whitney-Sidney to push the edge to 13-9. Sophomore Keith Higgins Jr. made a jump shot in the paint that put Lehigh back up by four points, 15-11, but the Orange surged back and knotted the match at 17-17.

After the first media timeout, Syracuse put a run together and pulled ahead by ten points, 29-19, with a little over six minutes remaining in the opening half. First-year Bube Momah recorded his first collegiate points on back-to-back fast breaks which led to five points for Momah after converting on the and-one opportunity, bringing the Mountain Hawks with five points, 29-24. After that point, the Orange began to pull ahead and would hold an 18-point advantage at the end of the half, 44-26.

In the second half, Lehigh shot the ball efficiently, with Taylor scoring 15 of his 20 points in the second half, including going 3-for-4 on 3-pointers. Syracuse would hold the lead for the rest of the contest, with their smallest lead of the second half being 16 points on a few occasions.

There were 10 different Mountain Hawks to make a basket in the JMA Wireless Dome, and they were paced by the offensive efforts of Taylor, who ended the night playing 33 minutes and scoring 20 points to go with his four 3-pointers, three rebounds, two steals and two blocked shots. This is the eighth time in Taylor’s career that he has scored 20 or more points in a game.

Higgins registered nine points with a team-leading three assists, two rebounds and a steal while Alumundun tallied eight points on three made baskets and a clean 2-for-2 from the free-throw line. He also contributed two rebounds and an assist. Parolin finished the night with seven points, going 3-for-4 from the charity stripe and two-for-four from the floor.

The leading rebounder for the Brown and White was junior JT Tan, who grabbed eight boards and was a co-leader in assists with three to go with his six points. Whitney-Sidney also tossed in six points, with a perfect 4-for-4 performance at the free-throw line and his dunk in the first half. Seniors Reed Fenton and Jake Betlow and junior Jayshen Saigal each drained a three-pointer for Lehigh, with Fenton also adding another basket for five points.

Lehigh will travel to Blacksburg, Va. to take on Virginia Tech at Cassell Coliseum on Thursday evening, with tipoff set for 6 pm on ACC Network Extra and Fox Sports Radio 94.7 FM and 1230 AM.