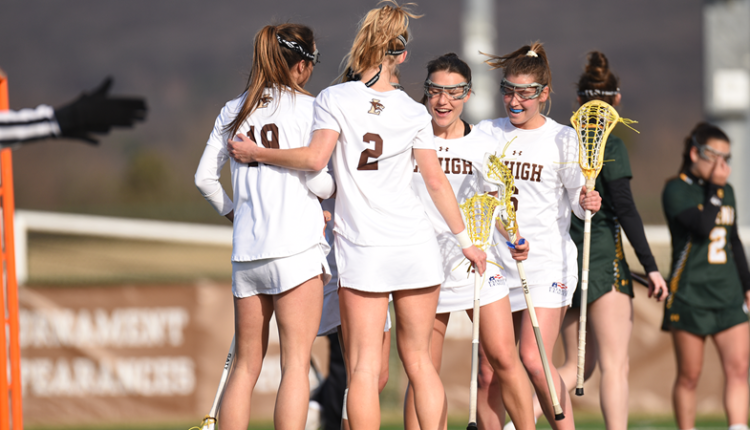 BETHLEHEM, Pa. – The Lehigh women’s lacrosse team went on a 7-1 run bridging the end of the second and beginning of the fourth quarters, turning a 9-8 lead into a 16-9 advantage, on the way to downing visiting Siena, 16-11 on Tuesday evening at the Ulrich Sports Complex. Junior Gabby Schneider posted four goals and three assists for her second seven-point game of the season, while classmate Emma Eberhardt scored five times and collected a game and career-high nine draw controls.

Lots of highlights in this one! pic.twitter.com/nPhI9QSFxo

— Lehigh W Lacrosse (@LehighWLacrosse) March 9, 2022 Lehigh used an early 3-0 run, capped off by two Schneider goals, to open a 5-2 first-quarter lead. Siena came right back, however, with three goals in the span of 1:33 bridging the end of the first and beginning of the second quarters, to tie the score at five.

The Mountain Hawks responded with a 4-0 run, beginning with a highlight-reel tally from Eberhardt. Schneider’s third of the game put Lehigh ahead 9-5 in the middle of the second quarter.

Nora Giordano collects the loose ball and finds Julia Skillin to give Lehigh a 10-8 lead just before the half!

— Lehigh W Lacrosse (@LehighWLacrosse) March 8, 2022 The Saints had another answer, however, scoring three straight to pull within 9-8.

The Mountain Hawks finished with a 34-28 edge in shots, 19-12 advantage in groundballs and 17-13 edge in draw controls. Sophomore Hayley Hunt finished with nine saves, allowing nine goals, while senior Kerry McHugh entered in the final five minutes and made one stop.

The Mountain Hawks will return to action on Friday when they travel to Johns Hopkins University to face Coastal Carolina in a neutral-site game at 10:30 am Please note the location and time change (was originally 12 pm at USA Lacrosse Headquarters). There will be no live stream, but live stats will be available.

We caught up with Emma Eberhardt after today’s 16-11 win over Siena! pic.twitter.com/DhPx0tDaBU