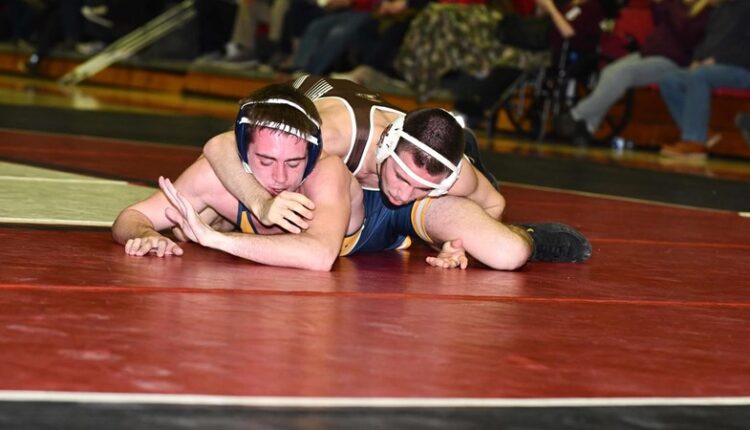 Mountain Hawks Move Four Into EIWA Semifinals; Sit In Fourth After Day One

ITHACA, NY – Four Lehigh wrestlers advanced to Sunday morning’s semifinals and four others remain alive in the consolations as the Mountain Hawks competed on day one of the EIWA Championships, Saturday at Newman Arena. Returning EIWA champions Josh Humphreys (157) and Jordan Wood (285) punched their tickets to the semifinals with a pair of bonus wins apiece. They are joined by first-years Max Brignola (149) and Jake Logan (174).

Humphreys wrestled a little over six minutes Saturday, beginning his tournament with a first period pin over Jack Nies of American and following up with a 16-0 second period technical fall over Harvard’s Trevor Tarsi. In the semifinals, the top seeded Humphreys will face No. 4Andrew Cerniglia of Navy.

Wood picked up a fall and a major decision in his bid to become the first five-time EIWA champion. He pinned Harvard’s Jeffrey Crooks in just under two minutes and then posted an 8-0 major decision over Cenzo Pelusi of Franklin & Marshall. Wood will face Ben Goldin of Penn in the semifinals.

Brignola gave up the first takedown in both of his bouts Saturday but battled back to win. He was taken to his back for six points in the quarterfinals against Luke Nietner of Drexel, but battled back within 6-4 in the second period, before slapping on a cradle for a key four point near fall. Brignola added a third period takedown to post an 11-7 decision, earning a semifinal date with Penn’s Anthony Artalona.

Both of Logan’s matches were won with late takedowns. After scoring late in the third period to beat LIU’s Ryan Ferro 6-4 in round one, Logan found himself in overtime with Columbia’s Nick Fine. Logan was defending a Fine shot and came out on top of a scramble for the winning takedown to prevail 4-2 in sudden victory. He will now face top seeded Mickey O’Malley of Drexel in the semifinals.

Seymour started the Mountain Hawks off with a second period pin of Binghamton’s Nick Curley in the pigtail round at 125. He bounced back from a loss to top seeded Patrick Glory of Princeton to win two bouts in Saturday’s evening session.

McGonagle fell behind 6-0 in his round of 16 match against Harvard’s Michael Jaffe but came back to win 11-9 in sudden victory. He lost in the quarterfinals to Bucknell’s Darren Miller but came back with a win over Brown’s Timothy Levine to earn a spot on the podium.

Burkhart posted wins over Drexel’s Bryan McLaughlin and Brown’s James Araneo, sandwiched around a loss to No. 2 seed Travis Stefanik of Princeton.

Davis fell just short of a first round win over Penn’s Cole Urbas, reversing late in the third period and just missing near fall points that would have given him the victory. He came back with a pin and a tiebreaker victory in the consolations to earn his place in the top eight.

Sophomore Brian Meyer (165) and first-year Malyke Hines (133) were eliminated Saturday and will need at-large bids to qualify for the NCAA Championships. Meyer won his first bout of the day before dropping two in the evening session. Hines is still working his way back from the injury suffered on Feb. 11. He took an injury default in the first round and medically forfeited out of the tournament.

The EIWA Championships conclude Sunday from Newman Arena. Session three, featuring the championship semifinals and consolation quarterfinals and semifinals, is set for 10 am while the finals session, featuring matches for first, third, fifth and seventh, will begin at 3 pm Streaming coverage for the entire tournament will be available via FloWrestling .org

From Ike to insurrection and beyond: The class of ’70 turns 70 | Opinion