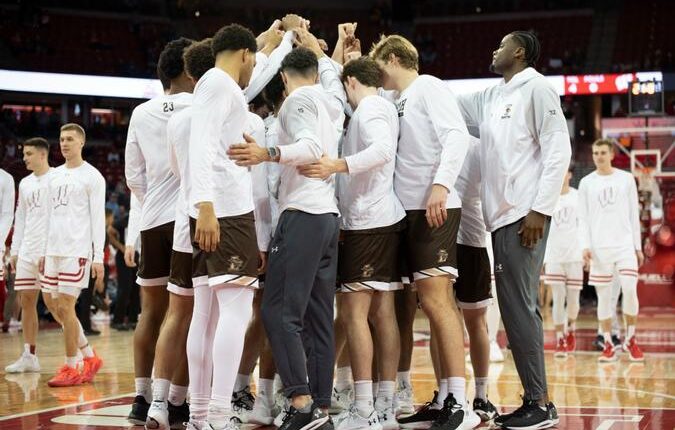 BETHLEHEM, Pa. – The Lehigh men’s basketball program is back on the road to play its third game in six days with a trip to Cornell for a non-league contest inside Newman Arena at Bartels Hall. The Big Red holds the series lead 13-9 and claimed their last meeting 81-79 in Ithaca in 2011.

The Mountain Hawks (5-5) even their record with the win and take the first-ever game between the two programs, while the Eagles (3-6) had a two-game win streak snapped. 11 Mountain Hawks recorded a basket with four finishing in double-figures, led by sophomore Tyler Whitney-Sidney, who scored 16 points. He went 6-for-8 from the field, 2-for-2 beyond the three-point line, and 2-for-2 at the foul line. Whitney-Sidney also led the team in assists with four, to go with four rebounds and a steal. Senior Reed Fenton scored a season-high 14 points in the victory, shooting 50 percent from the floor, and added four rebounds and team-high four steals.

Cornell (7-3) is on a two-game losing streak after a double-digit loss to Syracuse (78-63) and a two-point loss on the road at Miami (107-105). Two Bid Red are averaging double-figures, led by Greg Dolan, scoring 13.0 points, grabbing 4.4 rebounds and leading the team in assists with 49. Nazir Williams is averaging 11.7 points and 3.6 rebounds per outing while six other Big Red are scoring seven or more points.

The Mountain Hawks will travel to Army West Point on Friday, Dec. 30 to open Patriot League play. Tip-off is set for 6 pm and will be broadcast on ESPN+ and Fox Sports Radio 94.7 FM and 1230 AM.