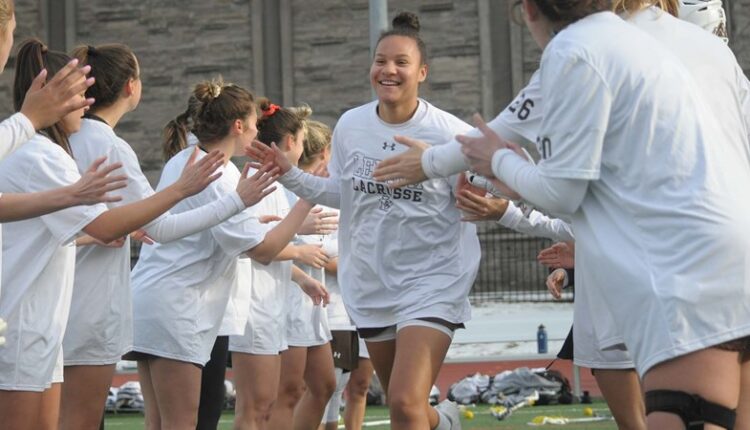 BETHLEHEM, Pa. – After spending the month of February on the road, the Lehigh women’s lacrosse team returns home with a vengeance, hosting three games in seven days beginning with the home opener this Wednesday vs. La Salle. Gametime is set for 3:30 pm on ESPN+. The Mountain Hawks will be vying for their first win of the year, one season after they picked up their first win of 2021 at La Salle.

The busy seven-day stretch also includes a home game vs. Wagner Saturday (12 pm) and against Siena next Tuesday (3 pm). Five of Lehigh’s next six games are home, with only a neutral-site contest against Coastal Carolina in between.

Lehigh is coming off a 17-6 defeat at No. 14 Rutgers last Saturday. The Scarlet Knights got out to a fast start, taking a 10-1 lead in the second quarter. But Lehigh settled in and went on a 3-0 run to close the half and pull within 10-4 after 30 minutes of play. Junior Gabby Schneider, who scored a career-high six goals in last season’s meeting with La Salle, scored four against the Scarlet Knights, to earn honorable mention on the Patriot League weekly honor roll. She now has 96 career points. Schneider is currently tied for first in the Patriot League in points per game (4.5) and tied for third in goals per contest (3.0).

Against Rutgers, classmates Emma Eberhardt and Katia Carnevale scored Lehigh’s other goals, while sophomore Hayley Hunt made 14 saves through the first three quarters in goal.

The last two meetings against La Salle have featured both a defensive battle (last season) and a high-scoring thriller (two years ago). The Explorers are 2-2 early in the season, with three of their four games being decided by two goals or fewer.

La Salle stands 2-2 on the season, beating Iona (14-13) and Mount St. Mary’s (10-9) before falling at Delaware (14-9) and Lafayette (11-9). Emily Johnston leaves the Explorers in points (11) and is tied for the team lead (with Tori Rolon) in goals with nine. Johnston’s 15 draw controls also lead the team while Maddie Henderson owns a team-leading seven caused turnovers and is second in draw controls (13) and groundballs (11). Henderson is the sister of former Mountain Hawks Jane and Maura. A pair of goalkeepers have split time, led by Kelli McGroarty, who owns a 7.65 goals against average and 63.9 save percentage in 101:57. McGroarty is also a member of the Explorers’ women’s soccer team as a forward/midfielder.

Lehigh has won four straight against La Salle to improve to 7-4 all-time against the Explorers. Last season, the Mountain Hawks were victorious on the road, 9-6, in a game that saw Schneider score a career-high six goals. Two years ago, Lehigh won a high-scoring thriller, 18-15, as Cecily Redfern set the program record for draw controls in a game with 14. The 2020 meeting at Lehigh was the first matchup in 11 years. Prior to that, the teams played every season from 1999 through 2009. The last La Salle win came in 2007, in Bethlehem, via a 13-11 final. Lehigh won the first meeting between the two sides, 18-6 in 1999.