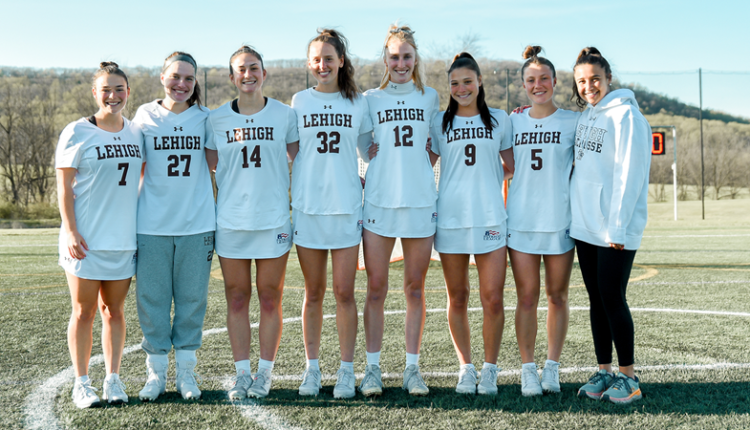 BETHLEHEM, Pa. – Riding high after its third consecutive victory, the Lehigh women’s lacrosse team returns home for the second time in four days, as the Mountain Hawks welcome Holy Cross on Saturday. Gametime is set for 11:30 am on ESPN+ and it will be Senior Day. Lehigh is coming off a dominant 16-6 victory over archrival Lafayette, in one of the Mountain Hawks’ strongest all-around efforts of the season to date.

“We will miss this senior class and each of their eight individual personalities,” said head coach Jill Redfern. “They have been part of outstanding success and served our program with resilience and pride.”

As associate head coach Sammy Cermack added, “We are very excited to honor the class of 2022 during Saturday’s game. It has been a pleasure to watch their growth and success over the last four years. Thank you for your continued dedication to our program and for all the laughs and smiles along the way.”

On Wednesday, Lehigh led 9-2 after a 7-1 first-half run, then Lafayette pulled within 10-5 at the half. The Leopards’ momentum was short-lived, however, as the Mountain Hawks scored six of the game’s seven second-half goals to erase any doubt. Junior Katia Carnevale led the offense with eight goals to tie a career high (the program record is 11). Classmate Gabby Schneider did set a program record for assists, dishing seven. It all came in the game’s first 32:29. Carnevale’s seven assists are tied for the second most assists in NCAA Division I women’s lacrosse this season, while Carnevale’s eight goals are tied for the seventh most.

Giordano and junior Emma Eberhardt each recorded three goals and an assist, with Giordano eclipsing 50 career points in the process. She stands fifth on the Mountain Hawks in goals this season (21) and points (29), both shattering previous career highs. First year Quinn Meyer scored her first-career goal in the second quarter to give Lehigh that 9-2 lead while junior Cassie Marte had a goal and assist. McGillis and Garden each caused two turnovers to lead the defense, while tallying three and four groundballs, respectively. Sophomore Hayley Hunt made 11 saves in goal, while McHugh made one over the final 4:09.

The win improves Lehigh’s Patriot League mark to 3-3, tied for fourth in the standings (with American, Monday’s opponent). The Mountain Hawks are only a half game from being out of the top six, as Bucknell and Colgate are currently tied for sixth at 3-4. On Saturday, Lehigh will face a Holy Cross team that’s 2-5 in the league, but has two convincing wins under its belt – 19-12 vs. Boston University and 16-4 at Holy Cross.

Holy Cross stands 5-9 on the season, 2-5 in Patriot League play, coming off losses vs. Navy (13-9) and at Colgate (16-15 in overtime). The Crusaders’ league victories have come over Boston University (19-12) and at Lafayette (16-4). Jolie Creo leads the offense in goals (51) and points (75); She stands sixth nationally in points per game (5.77) and 10th in goals per contest (3.92). Jordyn Arakelian (14 goals, 19 assists) and Isabella Miller (24 goals, seven assists) are second and third on the team with 33 and 31 points, respectively. Finley Cassidy leads the Crusaders with 44 draw controls while Maggie Cooney’s 21 caused turnovers lead the team. Goalkeeper Grace Flink leads Holy Cross in groundballs (29) while tallying a 13.68 goals against average and 42.1 save percentage.

Lehigh has won six straight against Holy Cross to take a 20-10 lead in the all-time series. The teams didn’t play in 2020 or 2021, with the Mountain Hawks winning the last meeting at Lehigh, 12-8 on Apr. 13, 2019 (which was also Senior Day). The previous season, Lehigh picked up a thrilling 16-15 win in overtime against the Crusaders in the Patriot League Quarterfinals. Holy Cross’ last win came on Apr. 19, 2014 at Lehigh via a 9-6 final; that marked the Crusaders’ third straight win in the series. Lehigh won the first seven all-time meetings (spanning 1992 to 1998).

Following Saturday’s game, the Mountain Hawks remain home to host American on Monday, Apr. 25 at 7 pm on ESPN+ in a game that was originally scheduled for Saturday, Apr. 9.