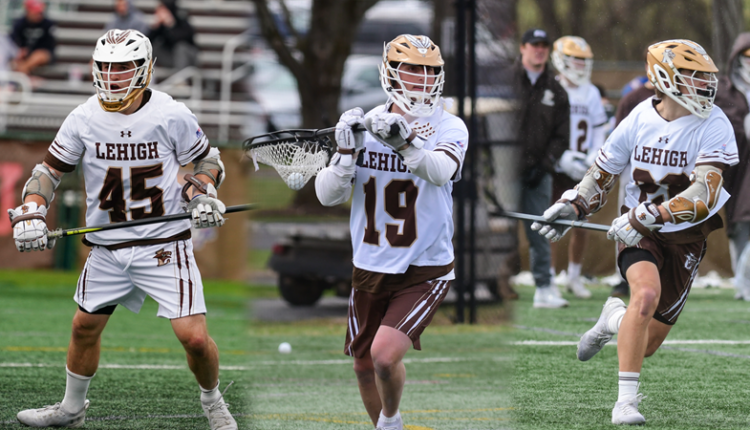 BETHLEHEM, Pa. – The Lehigh men’s lacrosse team has once again been recognized by the USILA for academic success. Fifth-years Teddy Leggett and James Spence along with senior Tommy Schelling were named USILA Scholar All-Americans, while the Mountain Hawks received the USILA Academic Team Award.

The individual honors for Leggett, Spence and Schelling give Lehigh 21 USILA Scholar All-Americans dating back to 2002, eight in the last three seasons and 18 since 2010. A Scholar All-American must be nominated by his coach and be a student with a senior year academic standing and a cumulative grade point average of 3.0 (4.0 scale). He will have behaved in a manner that has brought credit to himself, his institution, and to college lacrosse both on and off the field. He must also be an All-American, a member of a North/South team, or an outstanding league or conference player.

Leggett was named a USILA honorable mention All-American following a stellar fifth year in which he became a four-time All-Patriot League honoree, earning first-team laurels. He led Lehigh with 23 caused turnovers and finished second on the team with 48 groundballs. A graduate student studying healthcare systems engineering, Leggett was a Senior CLASS Award finalist and first team All-American in 2021. He carried a 3.66 cumulative GPA.

Spence was a second team All-Patriot League goalie in 2022 after earning consensus honorable mention All-America honors following the 2021 campaign. He ranked in the top 10 nationally in goals against average as a fifth-year as Spence backstopped one of the nation’s top defensive units. Spence was a management major with a 3.1 cumulative GPA. He was also a Senior CLASS Award candidate in 2022.

Lehigh received the USILA Academic Team Award for the second straight year. The relatively new award recognizes programs finishing the year with a team GPA above 3.0. The Mountain Hawks were at 3.06 for the spring semester and 3.17 cumulatively for the 2021-22 academic year.

Retief Goosen’s eternal even keel effective at US Senior Open