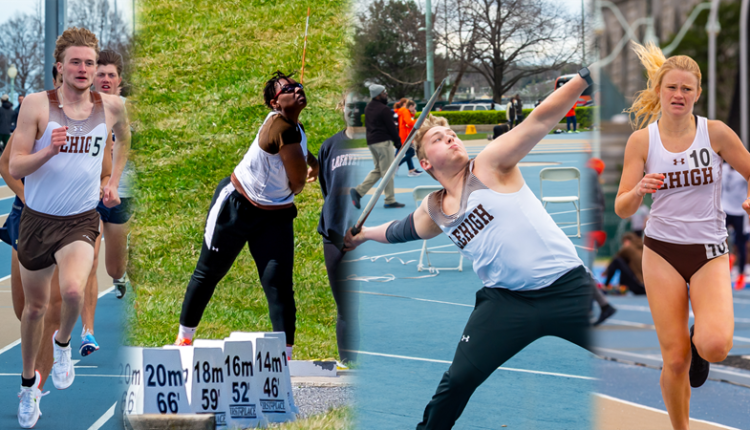 BETHLEHEM, Pa. – The Lehigh men’s and women’s track and field teams finished the first meet of the weekend with solid performances on Friday. The Mountain Hawks competed at Moravian’s Greyhound Invitational and tallied 15 PRs and two first-place finishes.

Lehigh’s throws group continued to find success on the field, finishing eight PRs and both first-place finishes. Senior Teasha McKoy was the first Mountain Hawk to earn a top finish on Friday, winning the discus with a mark of 47.88m. McKoy went on to finish fourth in the shot put with a mark of 12.61m.

Sophomore Achilles Mouzakis was the second member of Lehigh track and field to grab a first-place finish. Mouzakis won the hammer throw with a mark of 48.20m. The sophomore also earned a PR in the discus, finishing with a mark of 37.89m.

On top of two first-place finishes, the Mountain Hawks continued to show improvement in the four throwing events. The first-years led the way for the men’s track and field team, finishing with seven PRs. Hunter Rodarmel finished third in the javelin with a new personal record of 51.34m. Fellow first-years Greg Stagliano (49.90m) and Liam Campiglia (49.01m) finished close behind Rodarmel, finishing fifth and sixth, respectively.

“Almost all of the throwers are young kids and each week they are all making adjustments and working on things and improving,” said head coach Matt Utesch. “There are a lot of bright spots in the throws and I am really excited about the youngsters.”

“Veronica has very solid marks for this time of year,” said Utesch. “I’m pleased with mid-season marks like hers.”

“Lauryn had a great race and we are really pleased with how she ran today,” Utesch said. “It was her first outdoor race and a great way to open up the season.”

Graduate student Giavanna Tabbachino and senior Emma Linde both competed in the 5000m for Lehigh. Linde finished sixth with a time of 19:27.31 while Tabbachino finished ninth with a new personal record of 20:14.19.

The Mountain Hawks continued to put up solid times in the sprints events on Friday. In the 100m hurdles, sophomore Rachel Caldwell-Glixon finished with a new PR of 17.64. Junior Anna Murphy competed in her first outdoor meet of the season after recovering from an injury. Murphy finished the 200m with a time of 27.18 and finished eighth in the 400m with a time of 1:02.62.

“Anna had a good start after coming back from injury and it just shows how strong she is,” said Utesch.

Lehigh will wrap up competition at the Bison Outdoor Classic tomorrow before preparing for another busy upcoming weekend. The Mountain Hawks are scheduled to compete at the Coach P Invitational hosted by Moravian and also the Virginia Challenge in Charlottesville, Va. on April 22-23.

The Rise and Risks of Plastic and Microplastic Pollution

Greener pastures: A look at state agencies’ sustainability efforts in 2021 | Five for the Weekend