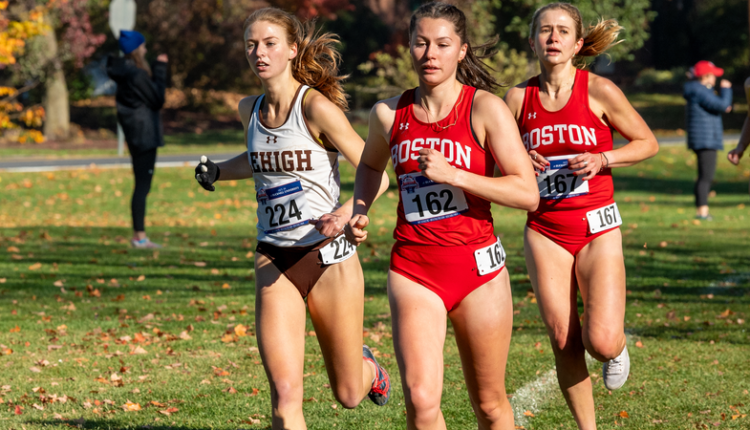 UNIVERSITY PARK, Pa. – The Lehigh women’s cross country team wrapped up its 2022 season by fulfilling its season-long goal: finish in the top 15 in the region. On Friday morning, the Mountain Hawks achieved their goal, finishing 15th at the NCAA Mid-Atlantic Regionals in University Park, Pa.

“We came in ranked 12th and looking at the results in retrospect, if we put a full, healthy squad out there like we had during the year, I think we would have finished 11th but the key thing is to finish in the top 15, said head coach Debbie Utesch. “The girls stayed focused. For the two weeks from Patriots they were really focused on maintaining a regional ranking and doing what they could to move up. They came out and they speeded like they belonged and that’s probably what I’m most proud of them for.”

Lehigh had six runners finish in the top 100 with junior Christina Yakaboski (21:49.2) pacing the Mountain Hawks with a 56th-place finish. Friday’s race marks the fourth time this season that Yakaboski finished first for Lehigh.

Sophomore Savanah Beavers and senior Andrea Miller finished second and third for Lehigh, respectively. Beavers, who made her Mid-Atlantic Regionals debut for the Mountain Hawks, finished 69th with a time of 22:06.4. Miller, who was in Lehigh’s top three for the third time this season, finished 82nd with a time of 22:20.5.

“Christina went out and she was trying to get as close as she could to that top 50 so she hovered right there the whole time and then Savanah Beavers had a really good race for us, stepping into that two spot and really finishing strong over the last mile,” Utesch said. “These were tough conditions, which we haven’t had all year and they were ready for it.”

“I think finishing the season being regionally ranked really showcases all of the work we put in this year and is a good cap to a successful season,” said Miller. “We toughed it out in the rain and proved our grit by working up and working together throughout the race. I’m proud of my team and all that we have accomplished this season and throughout my career as well!”

Three more Mountain Hawks finished in the top 100 on Friday morning. Senior Madison Zaun and sophomore Maddison Hayes followed close behind Miller, finishing 85th and 88th, respectively. Zaun finished her final 6k of the season in 22:25.6 while Hayes ran a 22:31.3.

“When we talked about individual places and final point scorers, our goal was to get five in the top 100 and then have our six and seven as close to that as possible so to walk away with six in the top 100 and the seventh right there on the edge that was, again they were ready,” said Utesch. “The conditions didn’t scare them. They came out, despite it being sloppy and wet, they were ready to be a bad weather team.”

Friday marks the end of a stellar 2022 season for the Lehigh women’s cross country team.

“I think the strength of this team all season has been their ability to do some things together,” Utesch continued. “Workouts together, races together, encourage each other together. When we started the season, we weren’t ranked and then we finished the season together in the rankings.”