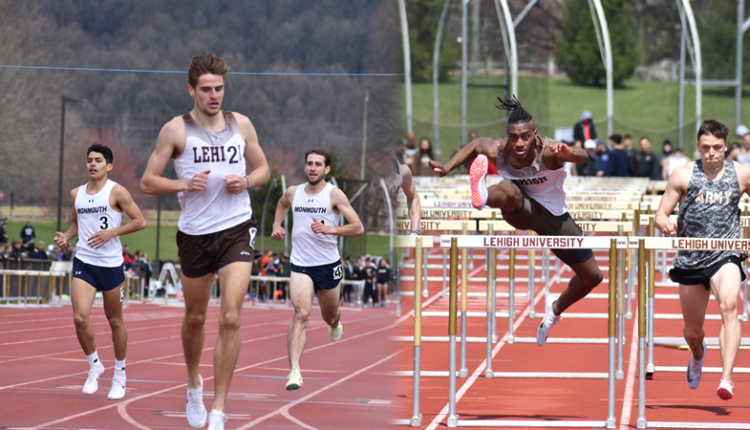 BETHLEHEM, Pa. – The Lehigh men’s track and field team continued to show improvement as the team wraps up the regular season and prepares for the upcoming outdoor Patriot League Championships on May 6-7. The Mountain Hawks competed at the Virginia Challenge and Coach P Invitational where they finished with five first-place finishes and 20 PRs.

Leading the way for Lehigh was senior Kyle Burke who broke his own school record in the 800m on Saturday at the Virginia Challenge. Burke finished first in the 800m, competing against student-athletes from Duke, Navy, Penn State, Princeton and Virginia.

The Mountain Hawks continued to show improvement on the track at the Coach P Invitational in Bethlehem on Saturday, finishing with three first-place finishes and five PRs.

Junior Joseph Cranley won the 1500m with a new PR of 4:04.10. First-year Kevin Harvey followed close behind, finishing fourth with a PR of 4:05.59. Graduate student Bradford DeMassa grabbed a first-place finish and PR in the 5000m on Saturday. DeMassa finished with a time of 15:28.25 while junior Ethan Davis finished second with a time of 15:33.46.

Lehigh’s sprinters continued to put up solid times on the track. Junior Douglas Cooke had a successful day at Moravian’s meet, finishing second in the 400m with a PR of 49.83 and third in the 200m with a time of 22.85. Senior Harrison Ernst ran alongside Cooke in the 200m where he finished fourth with a new personal record of 22.87. Junior Amondo Lemmon also competed in the 400m with Cooke, finishing third with a time of 49.88.

First-year Gideon Coprivnicar continued his streak of earning new personal records as he finished third in the 110m hurdles with a PR of 15.96. Sophomore Daniel Stipanov won the race with a time of 15.31.

In the jumps, first-year Mulenga Malama earned two second-place finishes. Malama finished second in both the long jump (6.32m) and triple jump (12.90m). Fellow first-year Jordan Layos earned a new PR in the triple jump on Saturday, finishing with a mark of 12.36m.

Two Mountain Hawks wrapped up the day with PRs in the pole vault. First-year Jack Murphy tied for second finishing with a personal record of 4.05m while Coprivincar finished fourth with a mark of 4.05m.

The Mountain Hawks will wrap up the regular season with another two-meet weekend next weekend. While some members of the Lehigh men’s track and field team will head to Philadelphia, Pa. for the Penn Relays, others will remain in Bethlehem for the Carol & John Covert Classic at Goodman Track and Field Complex.

Automatic or the people? | Opinion