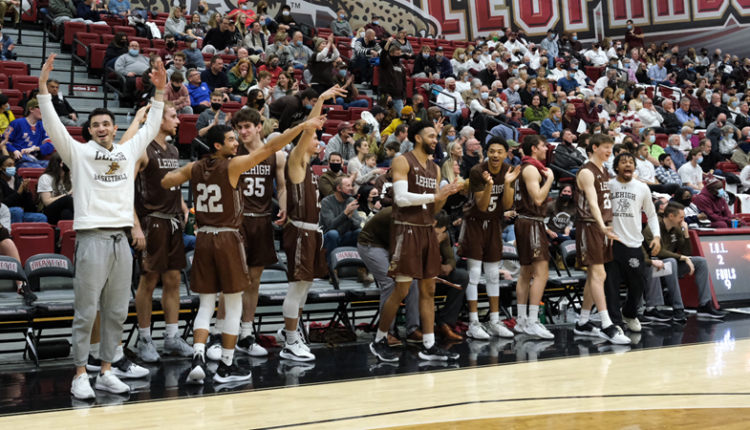 EASTON, Pa. – On a day when Lafayette honored his senior class and retiring head coach Fran O’Hanlon, the Lehigh men’s basketball team stole the show. The Mountain Hawks scored the first four points of the game and never trailed, on the way to a 78-58 win over the Leopards Saturday at Kirby Sports Center.

“Our kids came with great energy,” said Lehigh head coach Brett Reed. “They were focused, they were ready to go. They wanted to compete. The fact that we held Lafayette to 58 points over roughly 70 total offensive possessions was pretty impressive. That shows that our defense came and tried to establish ourselves and they can be a very prolific team.

“I thought our intensity, our communication and the way in which we set the tone, particularly early in the game was impressive,” Reed continued. “Guys were flying around. It became a special moment for all of us to be able to share on a pretty monumental night.”

Junior Evan Taylor poured in a game-high 23 points on 10-of-11 shooting. It marked the highest shooting percentage for a Lehigh player with at least 10 makes in Brett Reed’s 15 seasons as Mountain Hawks’ head coach. Taylor made his first 10 field goal attempts, including a pair of 3-pointers, and added nine rebounds. Senior Nic Lynch contributed his third double-double of the season with 14 points and 11 rebounds as Lehigh finished the regular season 10-8 in the Patriot League.

The win secured the No. 4 seed in the Patriot League Tournament for the Mountain Hawks, who will host No. 5 Army West Point in a quarterfinal Thursday night at 7 pm in Stabler Arena. It marks the sixth time in the last eight seasons Lehigh has earned a top four seed and home game in the quarterfinals. To purchase tickets, please click here.

The Mountain Hawks shot 54 percent from the field and connected on 8-of-23 from 3-point land, while a strong defensive effort limited Lafayette to just 34 percent shooting on the afternoon. No Leopard player reached double figure scoring, as Leo O’Boyle led the way with nine. Lafayette finishes the regular season at 7-11 in the league.

Taylor, Lynch and first-year Tyler Whitney-Sidney each chipped in five points and made a 3-pointer in the first nine minutes, as Lehigh raced to a 21-7 lead at the under-8 media timeout. Later in the half, Taylor grabbed a rebound on the defensive end and finished with a tough driving layup underneath to force a Lafayette timeout and put Lehigh up 15 with 6:39 remaining in the half.

The board on one end, finish on the other for @Evant2415.

— Lehigh M. Basketball (@LehighMBB) February 26, 2022 A jumper by junior Reed Fenton extended Lehigh’s lead to 17 points with 3:14 to play in the half. Lafayette came as close as 12 late in the first half, but an 8-0 spurt featuring a long Taylor jumper, a 3-pointer by first year Ben Knostman and a Taylor three-ball in the final seconds gave the Mountain Hawks a 44- 24 lead at half time.

🏀 @Evant2415 with the exclamation point on a terrific first half for the Mountain Hawks.

A turnaround jumper by Taylor following an offensive rebound by first-year Keith Higgins Jr., put Taylor at 20 points and gave Lehigh his largest lead of the day at 56-26 with 14:26 to play.

Lehigh kept Lafayette at bay through much of the second, with the Mountain Hawks advantage fluctuating between 20-28 points before an Eric Sondberg 3-pointer brought Lafayette within 19 with 3:59 to play.

The Mountain Hawks will host Army West Point Thursday night in a Patriot League quarterfinal at Stabler Arena with game time set for 7 pm Tickets are on sale now at LehighTickets.com and can also be purchased at 610-7LU-GAME during business hours.

“I feel like our team is playing good basketball right now,” said Reed. “We’ve been able to get into a flow, which is very impressive. And now it’s just a matter of continuing it.”

We caught up with @Evant2415 following today’s win at Lafayette! pic.twitter.com/AYNGNYuzqX