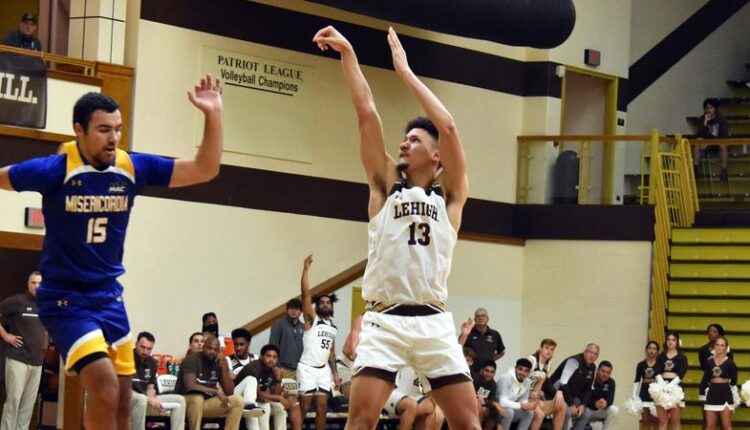 BETHLEHEM, Pa. – The Lehigh men’s basketball team used its early lead to propel them to a 97-58 victory versus Division III Misericordia University on Sunday evening. The Mountain Hawks took down the Cougars at Leeman-Turner Arena in Grace Hall, which is the first time since 1979 that it hosted a men’s basketball game.

Lehigh is now 1-2 on the year and handed Misericordia its second loss as the Cougars are now 2-2.

The Mountain Hawks opened up with a 10-0 advantage before Misericordia made its first basket making it 10-3. Continuing to pour it on, Lehigh extended its lead to 30 points, 45-15 with under a minute to play in the first half. Both squads would head into the intermission with the Mountain Hawks leading 47-20.

After senior Evan Taylor’s three-pointer with 17:04 remaining in the second half put the Mountain Hawks up 59-27 as Lehigh stayed ahead by at least 30 points for the remainder of the contest. The Mountain Hawks continued to stretch the lead to as many as 41 points, and ended their first home game with a 97-58 win.

A balanced scoring effort saw 14 different Mountain Hawks record a point Sunday, with four of them scoring un double-figures. Sophomore Keith Higgins Jr. recorded 17 points, going 6-for-9 from the field, 3-for-6 from long-distance and 2-for-2 from the free throw line. Higgins added three rebounds, two assists, one block and a steal while sophomore Tyler Whitney-Sidney also made six baskets from the floor, one 3-pointer, and both of his foul shots for his 15 points.

Taylor tossed in 12 points, going 5-for-7 from the field and 2-for-3 from beyond the three-point line, and brought down four boards. He swiped three steals and added one assist. Rounding out the Mountain Hawks in double-digit scoring was senior Reed Fenton, who went 5-for-9 from the floor, and knocked down a three-pointer for his 11 points. He contributed two steals, a blocked shot and one rebound.

Junior JT Tan led Lehigh in rebounds with eight, posting his second eight-rebound game of the season, to go with his six points, two assists, one block and a steal. Also scoring six points was senior Jakob Alamudun, who grabbed five boards and had one assist.

Highlights from our first win and the first game at Grace Hall in over 40 years!#GoLehigh pic.twitter.com/ikj4EtiWmJ

Four Mountain Hawks each contributed five points apiece; junior Dominic Parolin, Henri Adiassa, Jake Betlow and Bube Momah. Parolin posted four rebounds, a block and an assist while Adiassa, who scored a new career-high, ripped down six rebounds and added a block and an assist. Betlow drained a three-pointer and went 2-2 from the charity stripe for his five points, and dished out two assists, and was credited for three rebounds while Momah contributed three boards and one assist.

A couple of first-years recorded their first collegiate points wearing the Brown and White. Tommy Conniff scored a couple buckets for his four points to go with two rebounds and a blocked shot while Brendan Reed drained a three-pointer for his points. Sophomore Burke Chebuhar tossed in a couple of points and grabbed two rebounds and blocked a shot as fellow sophomore Ben Knostman sank a free throw to conclude scoring for the Mountain Hawks.

Lehigh ended the night shooting 45.6 percent while holding the Cougars to 33.9 percent from the field. The Brown and White shot 28.1 percent from long-distance as Misericordia shot just below that at 27.6 from behind the arc. The Mountain Hawks out-rebounded the Cougars 55-34 in the matchup.

Lehigh returns to the hardwood on Wednesday, Nov. 16 when the Mountain Hawks host Marist at Stabler Arena at 7 pm The game will be broadcast on ESPN+ and Fox Sports Radio at 94.7 FM and 1230 AM.