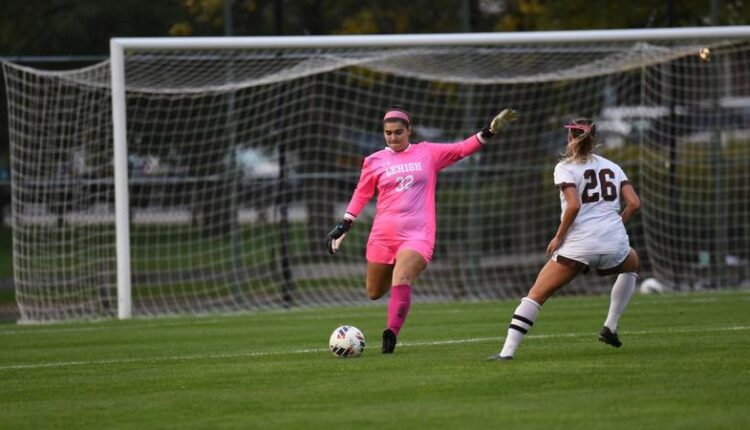 HAMILTON, NY – It was a battle of the defenses in Hamilton, NY as the Lehigh women’s soccer team played Colgate to a scoreless draw on Wednesday night. With the Mountain Hawks’ first draw in Patriot League play, Lehigh sits in fifth-place with 10 points and 3-2-1 record after six rounds of league play.

The Raiders opened up the beginning of the game with two shots within the first five minutes with both shots getting blocked by the Lehigh defense. Just six minutes later, sophomore Corinne Lyght put up her first shot of the game, sailing the ball just high over the right side of the net.

Colgate responded with four more shots within the first 45 minutes of play but Lehigh goalkeeper Maggie Ousouljoglou showed no signs of letting the ball get behind her. The first-year made three saves within the first half to keep the game scoreless at the half.

Entering the second half, Colgate added three more shots within the first five minutes of play but Ousouljoglou and the Lehigh defense refused to let the Raiders score the first goal of the game.

The Mountain Hawks and Raiders battled for a majority of the second half, alternating possession but ultimately unable to get past either defense. In the 89th minute, Lyght had a chance to secure the win for Lehigh but Colgate goalkeeper Grace Poncsak made her only save of the game to keep the game scoreless.

The Raiders outshot Lehigh 12-3 but the Mountain Hawks finished with a 4-2 edge in corner kicks. Ousouljoglou tallied five saves in net in her second draw of the season.

The Mountain Hawks will return to Bethlehem to host Loyola Maryland on Saturday at 2 pm The game will be streamed on ESPN+.