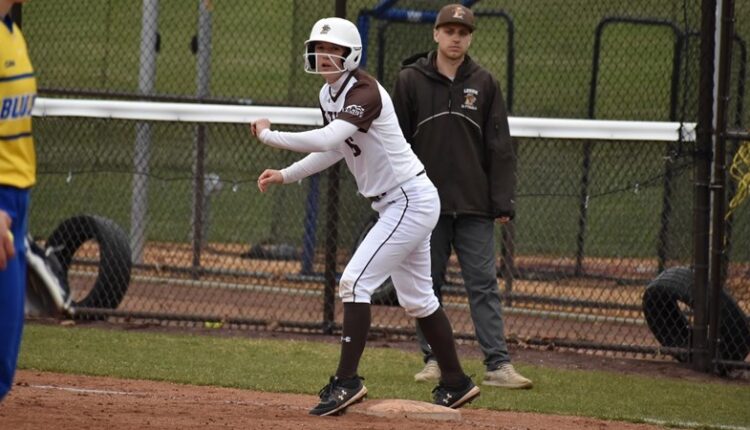 BETHLEHEM, Pa. – Lehigh’s eight game winning streak came to an end Wednesday in a 20-2 loss to Delaware in five innings at Leadership Park. The visiting Blue Hens jumped out to a 4-0 lead after half an inning of play and then scored 16 runs in the second, before Lehigh was able to keep Delaware off the board over the final three frames.

Junior Emily Cimino and senior Jaelynn Chesson both went 2-for-3 for Lehigh, which falls to 13-12 on the season.

Home runs from Hanna Garber (solo) and Brittney Mendoza (three-run) staked Delaware (21-11) to a 4-0 Lehigh before the Mountain Hawks came to bat.

A line-drive double play threatened a Lehigh rally in the bottom of the first.

Delaware blew the game open with 16 runs in the top of the second. The Blue Hens sent 19 batters to the plate and scored their runs on six hits, plus nine of the 11 walks issued by Lehigh pitching. Julz Garber had a two-run double in the frame and capped the inning with a grand slam as she finished the day 2-for-4 with six RBIs. Mendoza drove in four runs on the day while Brooke Glanded had three RBI and three runs scored.

Lehigh loaded the bases with nobody out in the second and got on the board when senior Karsen O’Rourke scored on a double play ground out. The Mountain Hawks added a second run in the third inning as Cimino singled up the middle with one out and then scored on a double to left center by first-year Rory Dudley.

The Blue Hens finished with 11 hits, while the Mountain Hawks finished with seven. Delaware established Leadership Park records for runs in a game and runs in an inning. The combined 22 runs scored are also a facility record, as are Garber’s six RBIs.

Sophomore Katelyn Young started in the circle for Lehigh and finished the game strong with three scoreless innings.

The Mountain Hawks will resume Patriot League play this weekend when they host Holy Cross for a three game series. Lehigh and Holy Cross will play a doubleheader Saturday and a single game Sunday with start times on both days set for noon.