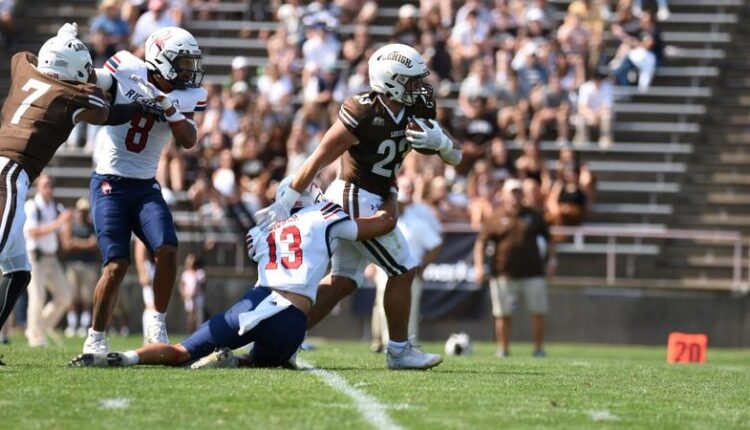 BETHLEHEM, Pa. – Playing in its home opener the Lehigh football team cut into a 20-0 halftime deficit with an early third quarter touchdown but visiting Richmond scored the final 10 points to claim a 30-6 victory over the Mountain Hawks Saturday at Goodman Stadium. Saturday’s game was played in front of 6,178 as part of Family Weekend, presented by PSECU.

Richmond quarterback Reece Udinski completed 37-of-44 passes for 351 yards and two touchdowns to lead the Spiders (2-1). Leroy Henley was his top target, catching nine for 127 and a touchdown.

Perri finished 22-of-34 for 188 yards with one touchdown and one interception. After rushing for more than 150 yards in each of its first two games, Lehigh was held to just 15 on Saturday, in part due to four Richmond sacks.

“Going into the game we knew Richmond was a really good team,” Lehigh head coach Tom Gilmore said. “They proved that to us today. A lot of credit to them but I’m still disappointed in how we performed and it wasn’t any one thing. One of the players just told me ‘We all took our turns.’ Whether it was not making the right calls for us as coaches.One guy not getting something done from an execution standpoint on one play but then getting it done on the other.It’s frustrating because we saw at times that we were able to execute fairly well but we couldn’t string it together. When you’re playing a good team, like Richmond, they were able to string things together.”

The Spiders moved 74 yards in 10 plays on the opening drive and took 7-0 lead on a 13-yard pass from Udinski to Henley.

Aaron Dykes scored a pair of second quarter touchdowns on an 18-yard reception and a two-yard rush to put the Spiders up 20-0. Lehigh’s best drive of the first half ended on a fumble inside the Richmond 20 yard line.

Lehigh finally scored on his second drive of the third quarter as Perri floated a short pass to Hill who then scampered 77 yards down the Lehigh sideline for the score.

Perri completes a pass to Zaythan Hill to get Lehigh on the board! Hill goes 77 yards for his second touchdown of the year!

Richmond added to his lead late in the quarter as Savon Smith floated a 23-yard touchdown pass on a halfback option to Connor Deveney. Jake Larson added a 34-yard field goal in the third quarter.

“The story of the day was they were throwing the ball a lot overall,” Gilmore said. “They threw the ball a lot on normal down and distance. We weren’t able to get a rush there and he’s a great quarterback. We knew that coming in and he was able to deliver the ball. We were playing too loose and they were able to move the chains. Once we tightened that up, we certainly did better. Offensively we just couldn’t string things along. We moved the ball a couple of times. We couldn’t string things together. The one time we did turned the ball over deep in the red zone. There’s a lot of good things that we can build on but it’s really frustrating that we weren’t able to execute at a higher level today.”

The Mountain Hawks are back on the road next Saturday to visit Princeton. Game time is set for 3 pm from Princeton Stadium with video coverage on ESPN+ and audio on Fox Sports Radio 94.7 FM and 1230 AM and LVFoxSports.com beginning at 2 pm