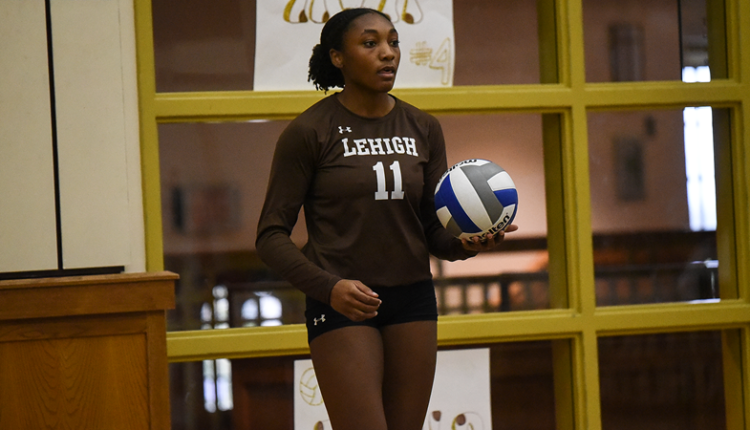 BETHLEHEM, Pa. – In its final match before the start of Patriot League play Lehigh fell to FDU 3-2 Tuesday night inside Leeman-Turner Arena at Grace Hall. The Mountain Hawks battled back from a 2-1 deficit to force a fifth set with a strong 25-12 win in the fourth, but the visiting Knights pulled away to win the deciding set 15-7 to defeat Lehigh for the first time since 2007 .

Junior Lylah Washington had a match-high 15 kills and hit .270 while first-year Natalie Luscomb added 12 kills and two blocks. Four Mountain Hawks reached doubled digit kills on the night as Lehigh hit .257 for the match, but FDU got 14 kills from MacKenzy Ruggiero and 12 from Kylie Nott while hitting .243 as a team.

Lehigh enters this weekend’s league-opening matches at 8-3, while FDU improves to 4-7.

Set two was so tight throughout. A kill by sophomore Emily Stewart gave Lehigh an 18-17 lead, but FDU scored the next eight points to win 25-18 and tie the match at 1-1.

The fourth set belonged to Lehigh as the Mountain Hawks registered 18 kills and hit .531. Lehigh used a 9-1 run to take control at 16-6. A kill by Stewart, followed by a FDU error and a Stewart service ace gave Lehigh a 25-12 win and sent the match to a fifth set.

FDU used a 6-1 run midway through the fifth set to take a 10-6 lead. A kill by Katarina Kaburov stopped the run momentarily, but the Knights scored the final five points to win the match, capitalizing on four attack errors during that span.

Sophomore Makena Smith registered 49 assists and 13 digs, while classmate Kylie Brown had 17 digs. The Mountain Hawks had a 10-7 edge in service aces and a 5-3 advantage in blocks.

Lehigh will open Patriot League play Friday at rival Lafayette with match time set for 6 pm from Kirby Sports Center in Easton, Pa. On Saturday, the Mountain Hawks will travel to Bucknell for a 2 pm match. The Lafayette match will be broadcast on ESPN+.

Pa. voters deserve all the facts on those proposed constitutional amendments | Opinion